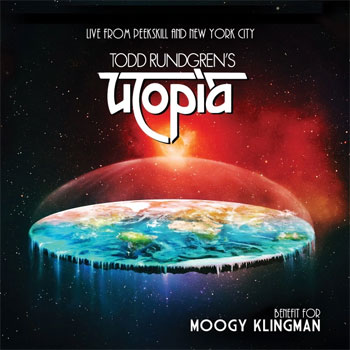 After the success of his double LPs Something/Anything? (1972) and Todd (1974) as well as the double-album in all but pressing A Wizard/A True Star (1973), Todd Rundgren decided to channel his progressive proclivities into a project separate from his solo work. Utopia was thus born. And while the earliest lineup never recorded, as the lineup settled in around a seven-piece group, Utopia shared with the world its music. Drawing from psychedelia, fusion (a la John McLaughlin’s Mahavishnu Orchestra) and progressive rock, that early Utopia made some heady, ambitious works.

In fairly short order, the band metamorphosed into something else entirely: a four-piece band that moved away from prog toward catchy powerpop/new wave stylings. But the prog-era Utopia – featuring three keyboardists – has a legacy of its own. One of its keyboardists was Mark “Moogy” Klingman. Even after the progressive configuration faded away, he maintained good terms with Rundgren, playing on some of the latter’s solo releases.

And so in 2011 when Klingman was facing a serious illness and mounting medical bills, Rundgren brought the original lineup together once again (for the first time in three decades) for a benefit concert. Those shows – in New York City and Peekskill – were recorded and filmed, and the whole package is seeing release now in a six-disc (4CD + 2DVD) set.

The first two audio discs document the January 29 show at the Highline Ballroom, and the set features not only Utopia material (“Utopia Theme,” the epic work “The Ikon,” “Another Life” “Freak Parade” and such) but songs from S/A, AWATS and Todd. The concert – at which Klingman performed with the band – also included some of the keyboardist’s own tunes.

The playful barrelhouse “Moogy’s Boogie” opens the set, and it’s a treat. A piano solo piece that quotes “Utopia Theme” before heading in boogie woogie and Gershwin directions, it sets the eclectic tone for the evening. A mini-set of Klingman originals (including “Ladyface,” a tune Rundgren used to play in concert but never recorded) explore the pop side of things. Klingman’s voice is no match for Rundgren’s, but the musicianship is top-flight.

It’s six tunes in before the full band joins in, but when they do, it’s 1974 all over again. “Utopia Theme” benefits from the multiple keyboardist configuration. In all its progressive glory, “Freak Parade” is tight and exploratory at once. The funky prog of “Another Life” is superb. At an abbreviated 17-plus minutes “The Ikon” is still thrilling. Late in the set, the Kasim Sulton spotlight number “Set Me Free” feels a bit out of place, but it’s fun nonetheless.

The pacing is flawless as the set heads toward a close with three deeply soulful Rundgren classics in a row: “The Last Ride,” “Just One Victory” and “Sons of 1984.” All are flawlessly executed in heartfelt manner. The show ends fittingly enough with “You Gotta Have Friends,” a Klingman tune recorded by Bette Midler. Klingman’s weedy vocals are tough sledding, but appealing in their own way. (Few listeners, however, will care to spin the track more than once.)

The third and fourth discs present the Peekskill concert that took place three days after Klingman’s passing at age 61. That show’s set list focuses more on Utopia material, songs that appeared on Todd Rundgren’s Utopia (1974) and Another Live (1975).

The Peekskill set’s production values impart an oddly flat and faraway feel to the sound, not unlike a monitor mix or a high-quality audience recording. And the reading of “Freak Parade” has an extended interlude that’s just plain weird, and not necessarily good-weird. The band regains its footing somewhat for “Heavy Metal Kids,” a song that invites a slightly messy reading. By the time of “Another Life,” things are back on track.

After a solid take on “The Wheel,” the reunited Utopia tackles the nearly-full version of “The Ikon” (this time more than 25 minutes long, still short of the half-hour studio original). The musical interplay is knotty where it should be, but the flat, muddy mix keeps it from shining quite as it should. Oddly enough, the sound seems to improve for “Freedom Fighters” and the closing “Just One Victory.” Before that last tune, Rundgren makes a short speech in memory of his fallen friend, and the audience responds in kind with chants of “Moogy!” The band takes “Just One Victory” at a significantly slower pace than normal, and in the process wrings every bit of emotion out of it.

Containing filmed version of what is heard on the four CDs, the audio-visual portion of the six-disc set was unavailable for review.