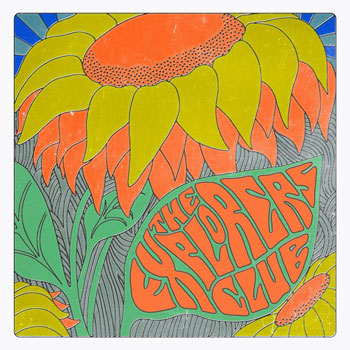 In my previous review I, um, explored To Sing and Be Born Again, the new all-covers album from Jason Brewer’s The Explorers Club. The group isn’t exactly what one would call prolific, having maintained a consistent pace of a new album every four years since 2008’s Freedom Wind. But as 2020 has come around, the group returns with not one but two new albums.

On one level, The Explorers Club stands in stark contrast to its companion album; where To Sing and Be Born Again is all covers, this self-titled release is a collection of a dozen originals. But once one moves beyond that surface difference, it’s clear that both are the product of a unified creative and aesthetic vision.

To call The Explorers Club’s body of original works an exercise in pastiche is to miss the point. True as it may be that Brewer’s chosen style is completely immersed in a very specific kind of pop idiom, his music always, somehow, manages to sound like The Explorers Club. He may enlist the aid of a different lineup of musicians – the shifting lineup that made the first two records, the Wondermints/Brian Wilson orbit of talents that helped make Together in 2016 – but in the end, the ineffable characteristics that are the hallmarks of his work are there for all to hear.

If one were so inclined, a game of spot-the-specific influence could be played while listening to most any track on The Explorers Club. “Ruby” shows shades of the Turtles’ “Elenore,” for example. But these songs are less pastiches of other artists than they are Jason Brewer originals rendered in a style that evokes vivid memories of music one has heard before.

And in fact, this new collection of songs sounds less like the Beach Boys than anything the group has done before. All of the arrangement and production values are there, but The Explorers Club does not sound like a long-lost Smiley Smile-era album from the Wilsons and their pals. For example, “Ruby” features rhythm guitar and bass parts that evoke thoughts of Sgt. Pepper more than anything else. And the vocal harmonies sound like Flo and Eddie backed by The Association (that’s another way of telling you that they’re amazing).

One of the many remarkable things about records from The Explorers Club is that because of their strong connection with a particular kind of sound, they age well. Grand Hotel was simultaneously timeless and out of its time in 2012; listening now, eight years later it maintains both those qualities in equal measure. One suspects the same will be true of The Explorers Club in 2028.

Brewer’s production choices almost always employ “real” instruments: string sections are strings, trumpets are brass. And when synthesizers crop up, they sound like what they are. So even though The Explorers Club isn’t really a group at all, its music is unfailingly real and organic in nature.

The songwriting on The Explorers Club places a high value on delivering memorable tunes. In the same way that Brian Wilson (to pick a not exactly random example) was at his best when collaborating with a supreme talent like Tony Asher or Van Dyke Parks, so too does Brewer benefit from his collaborative writing for The Explorers Club. Los Angeles-based Emeen Zarookian is a kindred spirit; while his other work differs slightly from Brewer’s style – I saw him live onstage fronting the band Spirit Kid in a tiny L.A. club a few years back – his musical sensibility meshes seamlessly with Brewer’s. The pair is responsible for half of the new album’s songs.

And one of the most rocking tunes on the new record is a Brewer/Zarookian cowrite: “Say You Will” has all of the winning appeal of a Three Dog Night single, capped off with a creamy vocal. And if the tune sounds like any other artist at all, perhaps it’s Matthew Sweet. Like Sweet’s best work, when The Explorers Club is firing on all cylinders, it’s equal part concept and execution.

“Somewhere Else” deserves special mention as well. Co-written with a team that includes Mike Williamson (a member of the Explorers Club when it was a performing outfit) is musically ambitious and high-energy. While parts of the song feel vaguely underwritten, the constant shift between two completely different time signatures and styles adds up to something quite memorable. And heavily distorted guitar – an ingredient rarely found on The Explorers Club’s records – sneaks into the mix. The breathtaking song is easily the most hard-rocking thing Brewer has ever shared with the world. And following it with “Dreamin’” – a tune that, save for its lead vocal, could have fit nicely on a Cass Elliott solo LP – drives home the point that Jason Brewer can excel at pretty much anything to which he applies himself.

Taken together, those two tracks effectively broaden the scope of The Explorers Club, in the way that Cinerama expanded the visual palette of film. Still, it’s fair to wonder if The Explorers Club is likely to expand Brewer’s base of fans. There’s a niche market for his brand of pop, and – not to put too fine a point on it – we’re getting older. But for anyone who luxuriates in flawlessly-crafted sounds that recall early ‘70s AM radio, The Explorers Club hits the sweet spot.