Album Review: The Explorers Club — To Sing and Be Born Again 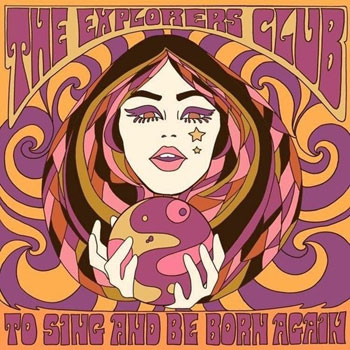 For more than a decade now, The Explorers Club have been bringing their brand of ear candy pop to listeners. Essentially a vehicle for songwriter, musician, arranger and producer Jason Brewer, the EC’s lineup has been fluid. Originally a band based in Charleston, today The Explorers Club is the creative product of Brewer and whomever he chooses to help out in his base of Nashville.

The group’s early albums – most notably 2008’s Freedom Wind and the wonderful Grand Hotel from 2012 – made the point that The Explorers Club could faithfully channel the vibe of peak-era Beach Boys, but with original material. In that, they were a kind of equivalent to Charlotte’s Spongetones, who operated in much the same way with regard to the Beatles’ body of work.

But as with the Spongetones, Brewer’s group has always been about much more than creating a modern-day pastiche of a single group. Brewer’s deep love (and more importantly, his thorough understanding) of what we might call “late ‘60s and early ‘70s AM gold” has long been evident in his writing and arrangement.

Not that anyone who’s been paying attention would have ever missed that fact, but as if to underscore the point, The Explorers Club’s latest album – well, one of two concurrently released albums; I’ll get to the other presently – is a collection of carefully-curated covers. To Sing and Be Born Again brings together ten songs, any of which might fit comfortably on the countless Today’s Greatest Pop Hits-type various artists releases from, say, 1969 or 1972.

The manner in which Brewer and his associates deliver this material is nothing short of stunning. The Explorers Club manages to have it both ways: the songs are at once true to the sound and spirit of the original versions. But too, they all sound uniformly like the work of a single group. It’s as if one band had created some of the best songs by Boyce and Hart, Manfred Mann, Paul Revere and the Raiders and even Herb Alpert.

Of course they didn’t. But To Sing and Be Born Again somehow connects the dots between Danny Hutton’s 1965 single “Roses and Rainbows,” The Zombies’ scintillating “Maybe After He’s Gone” and the Walker Brothers’ “The Sun Ain’t Gonna Shine Anymore.” More rocking than so-called yacht rock, more catchy than most riff rock and more sophisticated in execution than most of what passes for pop, this collection of songs is a thing to behold.

It’s near impossible to pick the “best” tracks from the album, though the stirring, Spectorian splendor of the Walker Brothers cover may just get the nod. Each of these songs has long since established itself as a pop classic, even if some – nearly half – have faded into obscurity, rarely heard even on oldies radio in 2020. But Brewer’s unassailable taste means that when he dusts off Orpheus’ “Can’t Find the Time” that his shimmering remake is simply swoonworthy.

Anyone who has fallen prey to the charms of The Explorers Club will know – even before hearing this album – that the vocal harmonies are deeply layered, creamy, note-perfect and soulful all at the same time. And it’s a given that the arrangement and production is very much in a Brian Wilson/Wrecking Crew style. If you hold any nostalgia at all for the AM radio pop of yesteryear, To Sing and Be Born Again is likely to bring a mist to your eyes and a smile to your lips.

In my next installment, I’ll take a look at The Explorers Club’s other 2020 release, their self-titled album.