Album Review: Miles Davis – Music From and Inspired by ‘Birth of the Cool’ 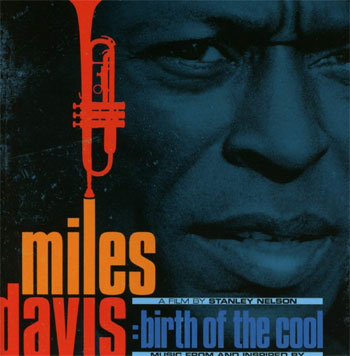 There’s a trend in recent years: when releasing a film’s companion audio, the CD is sometimes branded as “Music From and Inspired By…” That gives to compiler of the audio document a freer hand to include material that is conceptually relevant even if it didn’t feature in the film itself. Such releases can’t strictly be categorized as soundtracks, though they largely fulfill the same role.

At their best, such quasi-soundtrack releases are more than a companion to the films with which they’re connected. They expand upon the ideas of the film using the audio medium. That’s the case with the, um, “soundtrack” CD for Miles Davis: Birth of the Cool.

(Note: This release should not be confused with a similarly-titled album, Complete Birth of the Cool.)

Within this discussion, I won’t concern myself with the film itself, for a simple reason: I’ve yet to screen it (though it’s definitely on my must-viewing list). But the CD has virtues all its own. Customarily, I’d look somewhat askance at a music CD that featured spoken-word commentary for 14 of its 28 tracks. Interesting though they might be, those bits of dialogue could hamper the flow of musical enjoyment. Oddly enough, in the case of this release, they’re not altogether out of place. Moreover, many of the quotes — from Jimmy Heath, Ashley Kahn, Carlos Santana and others — are quite brief; taken as a whole, they only add up to a few minutes.

The sequencing of the music isn’t strictly chronological, but as a whole it provides a good overview of Miles’ body of work. It’s not strictly a best-of; for my money such a collection would have to include at least some of Jack Johnson. And there’s only one Kind of Blue track here.

But the set does do a good job of hitting the high spots. The earliest track is a 1947 recording of “Donna Lee” featuring Miles with Charlie Parker. And (with an important exception I’ll address in a moment) while there’s only one post-1970 track, for some Davis fans, that’ll be enough.

As it happens, I had more or less written off late-period Miles after hearing an uninspired Cyndi Lauper cover some years ago. But the title track of 1986’s Tutu is better than I might have expected, and underscores the point that while you might not have loved everything Davis did (many hated and still despise the groundbreaking Bitches Brew), he always, always pushed forward. “Tutu” features synthesizer programming from the always interesting Jason Miles. Hearing it on this collection has piqued my interest in giving Davis’ later work a fresh listen.

Andi n some ways, that’s the point of this album. Over the years, Miles Davis the personality has threatened to overshadow his work. It’s a fair bet that many more viewers saw his 60 Minutes interview in 1988 than ever heard a note of his music. And to be honest, there was little in that interview that would have endeared the musician to a viewer unfamiliar with him. And those who read (or even heard about) Miles’ autobiography know that a great deal of it is variations on “that muthafucka owes me money” and such.

So a disc like Miles Davis: Birth of the Cool largely sets all that aside and gives us the reason that his name is still spoken in reverent tones. At its best – which is often – the music here is transcendent. Spend five minutes with “’Round Midnight” and you’ll be entranced. Mere words cannot covey the beauty that lies therein.

A defining characteristic of Davis’ work with producer Teo Macero was his cut-up method of constructing finished recordings. Not quite a musical corollary to the manner in which William Burroughs wrote his books, what Davis and Macero did was take the best bits from a mass of recordings and then fly them into a finished track that – often as not – sounded nothing like what one would have heard being played live in the studio. That approach alone – as controversial as it was innovative – would be used to great effect by Frank Zappa, among others.

And as a kind of tribute to that spirit of adventure (and to provide something special for the fan who has it all already), the CD includes a new track. The composition credit for “Hail to the Real Chief” lists both Davis and synthesizer player Lenny White. Featuring a current-day band that included Davis scion Vince Wilburn, Jr., guitarist John Scofield, bassist Marcus Miller and others, the track features previously-unheard recordings of Davis himself on trumpet. It rocks. It’s funky. And it hints at what Miles might have sounded like were he still alive and making music in 2020.

That notable track aside, Miles Davis: Birth of the Cool is perhaps marginally worthwhile for the Miles fan who has most or all of his recordings. But it is most highly recommended to those looking for a tidy entry point into the music – and (save those dialogue snippets) just the music – of this pioneer.