“We’re not a bluegrass band,” insists Will Saylor, co-leader with brother Ben in Brushfire Stankgrass. Instead, the popular Asheville quartet uses bluegrass as the launching point for its musical excursions, venturing well into folk, jam and rock forms in the process. And while the group makes no claims to capture the essence of Asheville in its style, Brushfire Stankgrass’ effective hybrid music – Moog synthesizer coexisting with banjos – does result in a sound that’s uniquely Asheville. The group celebrated the release of City of a Thousand Hills  with a live-streamed show on May 24. And making up for lost time, a fourth and fifth release are in the pipeline, too. 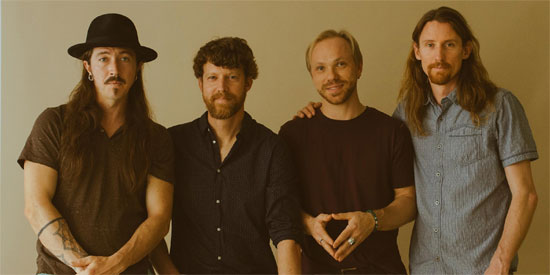 The group released its debut, One for the Salamanders, in 2010. Positive reviews in Relix coupled with a packed touring schedule helped build the band – Will on guitar, Ben on banjo, drummer Micah Thomas and bassist Daniel Ianucci – a solid, dedicated following. A second release, Microclimates, was released in 2013. But then everything stopped.

“We were going full steam after Microclimates, and we all kind of got burnt out a little bit,” says guitarist Will Saylor. The cumulative effect of “grinding on the road and all going through some personal life changes” meant that it was time to step away from the band for while. So Brushfire Stankgrass went on hiatus.

Songwriter and banjo player Ben Saylor moved away, settling for a time in Montana. But he and Will continued to write music that would be destined for the group when it reconvened. In fact, Will says, he and his brother have written more material than can fit on one album. “We’ve got a backlog,” he says.

In 2019 the band set up at Echo Mountain Recording and cut City of a Thousand Hills. The rock textures that characterized Microclimates are subtly scaled back on the record. “I usually play my banjo through a lot of effects,” says Ben. “But on City of a Thousand Hills, I used no effects.” He describes the album as “a little more acoustic and bluegrassy” than its predecessor.

The time spent away from Brushfire Stankgrass yielded an additional cache of songs that explore the rock and jam side of the band. The best of those songs have been recorded as well. “We’ve had seven years to [work on the next album, due out later this year,] The Rich Cache,” says Ben. “It has a more electric feel; Moog effects and synthesizers are used heavily on some tracks. It’s more eclectic, and leans more toward jam/fusion.”

And then there’s what Ben laughingly calls “the new new album.” Recorded just before the band members went into quarantine, the as-yet-untitled collection of songs “straddles between jam rock and Americana,” he says. Will emphasizes that when people listen to Brushfire Stankgrass’ new releases, “you can hear the maturity, how we’ve changed over the years.”

Will says that the band’s debut was “kind of raw and new. Microclimates was a little more polished.” And City of a Thousand Hills benefits from the world-class staff and gear at Echo Mountain. “That was our first album that we actually recorded in a studio as opposed to home recording,” Will says. While Microclimates was a layered and overdubbed production, the band took a more organic approach for City. “We all set up at the church and cut these songs one by one,” he says. “That imparted a different character: the music is a little more fluid feeling.”

With COVID-19 restrictions still in effect, Brushfire Stankgrass marked the launch of City of a Thousand Hills with a live-streamed concert broadcast from the Grey Eagle. That performance was part of The Grey Eagle Sessions, a regular series of concerts broadcast via the venue’s Facebook page.

Ben and Will acknowledge that two signature characteristics of the region – mountain music and pioneering electronic synthesis – influence the music they make with Brushfire Stankgrass. But it wasn’t necessarily planned that way. “I think it would be a little bit contrived to say, ‘Let’s make an Asheville-y sounding band,” says Ben. “But that’s the environment we make our music in, so we just sort of happened to end up that way.”