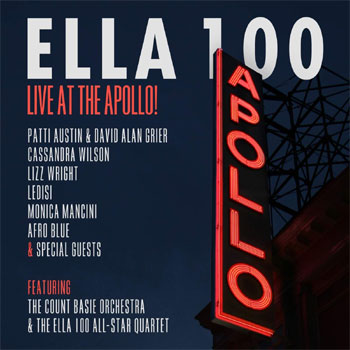 The First Lady of Song, Ella Fitzgerald was among the most influential vocalists of the 20th century. Her distinctive voice, her seemingly effortless and natural delivery and her winning personality combined to great effect. April 2017 marked the 1200th anniversary of her birth, and to commemorate her life and work, an all-star lineup of musicians gathered at Harlem’s Apollo Theater.

Rather than merely roll out a parade of current-day artists, each paying his or her tribute in song, the organizers took a different, more inspired approach. Actor David Alan Grier introduced the proceedings in the guise of a radio program broadcasting “Amateur Night at the Apollo.”

Then, backed by the Count Basie Orchestra, a procession of A-list vocalists did indeed pay tributes, by covering material popularized by Fitzgerald. Singers on the program – captured on Ella 100: Live at the Apollo! – include Patti Austin, Cassandra Wilson, Lizz Wright, Afro Blue and others.

Grier’s moderation reminds the audience of Fitzgerald’s place in music history, but in the end, it’s the music itself that’s the focus of the set. Each vocalist brings her own personality to bear on the material, but there’s a solid balance of reverence and energy. The orchestra keeps things rooted in the style that the music demands.

Upbeat tunes like “A-Tisket, A-Tasket” (by Austin with a rousing male vocal chorus) feature alongside a soulful and raspy turn by Andra Day (“Ain’t Misbehavin’’) and more contemporary arrangements (David Alan Grier singing “Do Nothin’ Till You Hear From Me”).

The musicianship and vocal work is uniformly excellent and polished throughout, and the production values are, of course, top-notch. The bits of dialogue are long enough to provide context yet brief enough to avoid hampering the flow. And even though the evening is vocal-focused, a showcase number, “Back to the Apple!” gives the Count Basie Orchestra an opportunity to struts its stuff.

After an intermission, the set list settles in to more romantic material, but the energy returns quickly. A big fish comes in the form of “You’ll Have to Swing It (Mr. Paganini),” but the evening gives the final word to Fitzgerald herself, who passed away in 1996. A recording of her onstage in Budapest, “People” provides a fine way to conclude the evening.