Outrageous: The Mind Excursions of Dennis Coffey (Part One)

Dennis Coffey made his name among musicians as an in-demand session guitarist in Detroit. Coffey played on literally hundreds of sessions; that’s him you hear laying down the memorable guitar parts on the Temptations’ “Psychedelic Shack” and “Just My Imagination,” Edwin Starr’s “War,” Freda Payne’s “Band of Gold” and countless others. As a key member of the studio aggregation known as the Funk Brothers—Detroit’s answer to L.A.’s Wrecking Crew and the south’s Muscle Shoals Rhythm Section—Coffey gave a distinctive rock edge to soul, r&b and funk recordings; his facility at coming up with memorable licks and playing in most every style meant that he was one of the busiest musicians in Detroit. 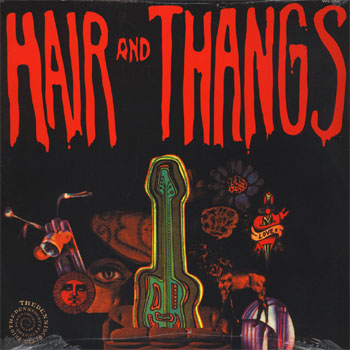 Enterprising music executive Clarence Avant took notice of Coffey, signing him to a solo record contract. Released on Maverick Records (a subsidiary of MGM), Coffey’s 1969 debut Hair and Thangs showcased the studio collaboration between Coffey and his production partner Mike Theodore.
“I met Mike at Golden World Studio,” Coffey says. “I happened to be in there with some dudes from Wayne State, because I was majoring in music. I hired some of my friends to be the string section. Mike said that he knew how to do horns, but he’d never written for strings.”

Theodore suggested that he and Coffey team up and do arrangements for Detroit acts. Coffey says he bluffed his way into the partnership. “’Yeah, I’m an expert,’ I told him. I only did it once! So, we started doing that.” Though many of the duo’s productions were credited to Theodore, in reality both he and Coffey worked behind the recording console and on devising arrangements.

“Ralph Terrana gave us the keys to his studio, Tera Shirma; we had an office over there,” Coffey says. “So, at 2 o’clock, I’d get done playing a club. All my buddies were in bands, so I’d pick [some musicians] and they’d meet us over at Tera Shirma at 3 a.m., and we’d record. That’s how we learned how to produce.” The results of some of those early sessions came out as records by the Sunliners, who later found greater fame as Rare Earth.

Hair and Thangs was credited to the Dennis Coffey Trio, a highly versatile group that included Lyman Woodard on organ; Coffey and Woodard had been playing together for some time in a soul-jazz trio, with a regular residency at Morey Baker’s Showplace Lounge. Tapes of a 1968 soul-jazz performance have been released recently on other labels as Hot Coffey in the D and One Night at Morey’s: 1968.

Coffey and Theodore eventually became the “house producers” for Avant’s Sussex label. “He put us on salary,” Coffey says. The duo produced the Gallery, scoring a hit with “Nice to Be With You” (Cashbox #1 in 1972), and (Sixto) Rodriguez’s debut, Cold Fact. With his songwriting, arranging and production skills developing rapidly, it made sense for Coffey to focus on making more albums under his own name. 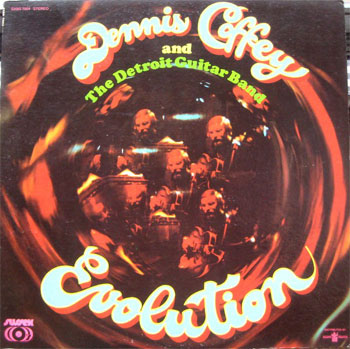 Evolution (1971)
Credited to Dennis Coffey and the Detroit Guitar Army, Evolution is both an experiment and an exercise in commercial funk-rock. The concept came from Coffey. “I had a sound-on-sound tape recorder at home,” he recalls. “I sat in my basement and wrote ten songs, and I thought, ‘Instead of writing for horns and strings like Mike and I are doing, I’ll make it a guitar band.’” With longtime associate (and fellow Funk Brother) Bob Babbitt on bass plus percussionist Jack Ashford, Evolution featured three guitarists—Coffey on alto guitar and sitar, Joe Podorsek on baritone guitar, and tenor guitarist Ray Monette—with overdubbing effects creating a guitar assault.

Most of the songs on the all-instrumental Evolution were Coffey originals; an inventive reading of Led Zeppelin’s “Whole Lotta Love” is the album’s sole cover. But the breakout track would be Coffey’s “Scorpio,” a hit single (Billboard #6) that eventually earned the group the honor of being one of very few predominantly white groups to guest on the popular Soul Train TV show.

Recorded at Detroit’s GM Recording Studios, Evolution featured a number of Coffey’s buddies. But many—including Uriel Jones, “Bongo” Eddie Brown, Richard “Pistol” Allen and Earl Van Dyke—appeared uncredited. Motown’s Berry Gordy had an iron-fisted rule against his musicians playing sessions for others. So as far as official records document, they didn’t. “I didn’t want to get those guys in trouble,” says Coffey. “Isn’t it funny, though? I was playing with them every day at Motown.”