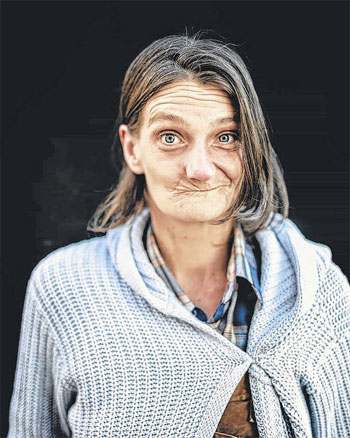 Train-hopping hobos are part of America’s cultural fabric. From the late 19th century through the 1940s, hundreds of thousands of itinerant people in America made their lives on the fringe of society, traveling the rails, picking up work wherever they could. The hobo subculture developed its own traditions in music and folklore. And while today there are far fewer ‘travelers’ than a century ago, their influence on folk art and culture remains.

Kansas-born Abby Roach rode the rails for several years. Today she’s settled in Asheville, and has become a leading light of the city’s busker culture. Known widely as Abby the Spoon Lady, Roach weaves hobo culture into the arts of the mountain city.

Living by different rules can mean that conventional notions of time are less important. Roach isn’t even sure when she first hopped a train. “I’d have to think hard on the year,” she says. “I was 23.” She traveled all around the United States, developing a facility for playing spoons as a way to contribute to the folk music being made by her fellow travelers.

Roach ended up in Asheville by mistake. “I took a wrong train and ended up here,” she says matter-of-factly. But the city’s character stirred something inside of her, so she stayed. “I already knew a bunch of folks here,” she says. “A lot of creative folks who used to travel had kind of set roots in Asheville.” Unlike many other American cities, in Asheville street performing isn’t prohibited by law; for Roach, that added to its charms.

“There’s an entire culture behind street performers,” Roach says. “Traveling minstrels are a little bit like migratory farm workers; they’re going where the work is. And when tourist towns outlaw [busking], a lot of times they’re outlawing it for reasons that don’t necessarily have to do with street performing.”

Teaming up with multi-instrumentalist Chris Rodrigues, Roach began busking on the streets of the city, delighting passers-by with homespun folk music that brought alive a little-known part of America’s cultural character. Roach attracted national attention; she contributed to three documentary shorts about busking culture. In 2017 filmmaker Justin Johnson made a documentary, Abby the Spoon Lady, and Roach was the subject of a 2018 profile in Washington Post Magazine.

Today, in addition to busking, Roach leads the Asheville Buskers Collective, a group that advocates for the unique needs and concerns of the local street performer community. She also hosts storytelling events, and since 2017 has hosted Busker Broadcast, a weekly program on AshevilleFM community radio.

All of those endeavors build upon and expand Roach’s treasure trove of songs and stories, gems of culture that she collected during her days on the railway. “I love the entire idea of musical anthropology,” she says. “I like to compile stuff that so that other people can enjoy some of the things that I’ve collected. And I’d like to do more.”

Roach’s raised profile comes as a bit of a shock to her. “I don’t necessarily want to be famous,” she says. “I used to wear my PJs to Walmart, and now I can’t, as I usually end up taking a selfie or two with folks while shopping.” But she and Rodrigues still busk on the streets of Asheville. “We play on the street as often as we can,” she says. Roach hopes to build upon the notoriety she’s gained; she and Rodrigues are currently seeking management representation. “I have no idea if all of this will pass,” she admits.

In contrast to the primitive tools used to make her music – repurposed kitchen utensils, battered acoustic guitars – Roach makes full use of technology to bring music and folklore to a wider audience. “There’s definitely a subculture of music and song,” she says. “And in the internet age, a lot of times folks are learning new music through YouTube and Spotify.” With more than 70 performance videos, Abby the Spoon Lady’s YouTube page boasts nearly 150,000 subscribers.

Roach and Rodrigues produced those videos themselves. “Chris does all of our recording, and I do the video stuff using Adobe After Effects,” Roach says. “We pretty much do everything DIY.” Coupled to current technology, that do-it-yourself aesthetic helps the music find new and enthusiastic fans. “Folks react pretty well to stuff that’s shot on the porch,” Roach says with a warm chuckle.

Those folks react the same way when they encounter Roach playing spoons on the sidewalks of downtown Asheville. “I got hooked on street performing when I saw just how satisfied everybody was with something so simple: us playing music with silverware.”