Never Giving Up on the Blues: Lil’ Ed & the Blues Imperials

Lil’ Ed Williams is Chicago blues royalty. Nephew of Blues Hall of Famer J.B. Hutto, Williams launched a band of his own, Li’ Ed and the Blues Imperials, in the mid 1970s. A fine electric slide player, Williams knew how to put on a show. He fronted a band that Alligator Records founder Bruce Iglauer described, was “rough and ready, if somewhat sloppy,” but the ensemble delivered genuine blues feeling. 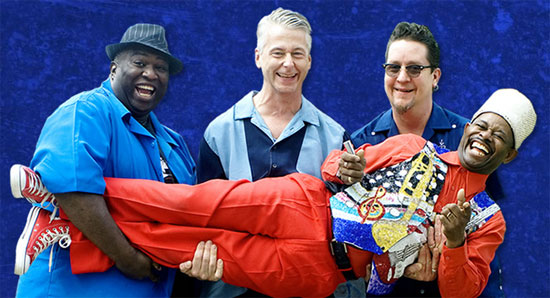 Lil’ Ed & the Blues Imperials toiled for several years on Chicago’s blues circuit before winning over Iglauer. After Williams contributed to a various artists collection called The New Bluebloods, Iglauer brought the band into the studio to cut an album of its own. Even though the group was all but unknown outside Chicagoland, Roughhousin’ sold more than ten thousand copies in the first year of its release.

In its early days the band feautred guitarist Dave Weld; he eventually left to form his own group, the Imperial Flames. But the core of Williams, his half-brother and bassit James “Pooke” Young and guitarist Mike Garrett has remained the group’s center of gravity. Though Williams left Alligator for a time due to drug problems, he would eventually return; today the band has nine albums to its credit, all on Iglauer’s label.

The Blues Imperials doggedly built on their early successes, cultivating an international following. Recipients of the Blues Music Award (Band of the Year) in both 2007 and 2009, the band continued to rack up plaudits. In 2011 the group scored Living Blues Magazine’s award for Best Live Performer. They won yet again in each of the years to follow. As Iglauer wrote in his 2019 memoir Bitten by the Blues, Williams was “not just a musician, but also an entertainer. He played on one foot, dropped to his knees and bent backward until his head toughed the floor [and] duckwalked like Chuck Berry.” Even early on, Iglauer’s impression of the band was this: “exactly what a Chicago blues band was supposed to be … spontaneous, raw, energetic, and musically telepathic.”

With a sound that combines rock textures, Williams’ slide work and vocals and a solid blues foundation, Lil’ Ed and the Blues Imperials remain blues ambassadors for the 21st century. In addition to being a regular at local and regional music festivals, the band has traveled the world, with stops at high profile festivals like the New Orleans Jazz & Heritage Festival.

The band’s latest release, 2016’s The Big Sound of Lil’ Ed & the Blues Imperials finds the band in as fine form as ever. On tracks like “Giving Up on Your Love,” Williams and his band mates deliver authentic blues for purists, with enough rock attitude to win over the mainstream rock audience weaned on crossover acts. With energy to burn, Lil’ Ed & the Blues Imperials are the real deal.