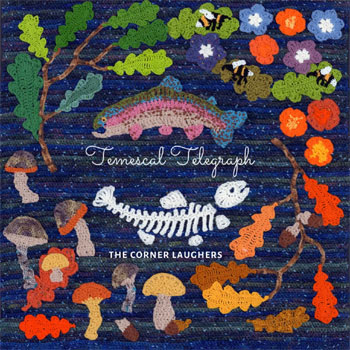 Based in Redwood City, The Corner Laughers craft a brand of pop that’s sophisticated, clever, erudite and memorable – one that follows in the proud tradition of great songwriting artists like Carole King and Paul McCartney. Across the group’s several singles, EPs and albums, a love of wordplay combines with subject matter beyond the simple love songs of conventional pop to create something truly special.

Karla Kane is the group’s center of gravity. Composer of all but one of the songs on Temescal Telegraph, Kane is also lead vocalist. And her ukulele is prominently featured throughout the record. Khoi Huynh – Kane’s husband – is nominally the Corner Laughers’ bassist, but he plays multiple instruments, as does (nominal) guitarist KC Bowman. Charlie Crabtree is the drummer, and the four have formed the core of the group since its inception nearly a decade ago.

The first characteristic one notices listening to Temescal Telegraph is the group’s breezily melodic bent. Beyond that are finely-wrought arrangements. But dig deeper still and discover lyrics that sometimes border on poetry (“Our feet / upon the leaves / that have fallen overnight while we were sleeping”). And even on bouncy tunes like “Changeling,” there’s more going on than initially meets the ear.

Huynh’s bass lines, in particular, do more than simply hold down the bottom; often as not, they provide a melodic counterpoint to Kane’s lead vocal line or Bowman’s lead guitar licks. The years the four musicians have spent together recording, rehearsing and (occasionally) playing live yield a natural musical camaraderie that – as is the case in the best bands of any sort – suggests an unspoken, subliminal level of communication.

But it’s timeless pop values that are The Corner Laughers’ stock in trade. The ear-candy tunes occasionally display flashes of influence from other genres; Bowman’s solo on “The Accepted Time” has a distinct country flavor. “The Lilac Line” (premiered below) rocks harder – and faster – as it barrels toward its conclusion. “Loma Alta” features a deeply layered, ambitious arrangement, and “Sisters of the Pollen” recalls The Bangles at their catchiest. But whatever musical textures the group employs on a given song, every ingredient is in service of crafting first-rate music.

The group has a long tradition of enlisting the help of kindred souls to achieve its musical goals; in the past the Corner Laughers have collaborated with the prolific and idiosyncratic Sacramento/Berlin-based Anton Barbeau as well as underground DIY legend Martin Newell. That approach continues on the group’s latest: guest artists on Temescal Telegraph include Bradley Skaught (of harder-rocking but otherwise like-minded pop group The Bye Bye Blackbirds) and Big Stir Records co-head Rex Broome.

Any recording from The Corner Laughers’ catalog is deserving of a spin. But with Temescal Telegraph – available June 5 from Big Stir Records – the group presents its most fully-realized set of pop songs to date.