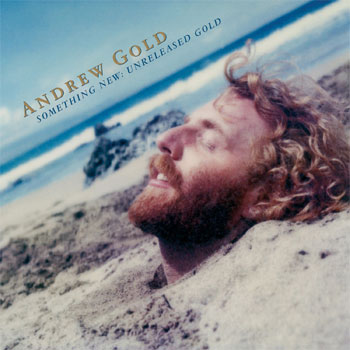 Andrew Gold’s name has been circulating quite a bit of late, at least in music nerd circles. And that’s pretty remarkable considering that he passed away just about nine years ago. The first instance of his name popping up on my radar screen was around the time that Linda Ronstadt: The Sound of My Voice premiered, around this time last year. Many of those who watched the film praised its coverage of Ronstadt and her career. But nearly as many pointed out what they saw as a sin of omission: apparently, the documentary (which I must admit I haven’t seen) makes no mention of Gold and his role in Linda Ronstadt’s music. His musicianship and arranging skills were a key component of the creative (and commercial) success of Heart Like a Wheel, her breakthrough album from 1974. That song “You’re No Good”? That’s Andrew Gold playing pretty much every instrument.

The second reason that Andrew Gold’s name is back in the public consciousness – and the reason I’m writing about him right now – is because Omnivore Recordings has put together a new album of previously unreleased tracks of his music. And while at least as often as not, archival musical digs tend to be for the faithful (as opposed to casual fans or the general public), Something New: Unreleased Gold transcends the archival-release category.

Most people know Gold’s music thanks to one song: Thank You for Being a Friend,” a tune that was a Top 40 hit on its original release in 1974, and one that gained a second life more than a decade later when it was used as the opening theme for The Golden Girls television sitcom. But Gold had other hits, including “Lonely Boy,” best described as a catchier and far less maudlin slice of melancholy nostalgia a la Harry Chapin’s “Cat’s in the Cradle.”

Gold had a busy career as a touring musician, both with Ronstadt and Eagles as well as a solo artist fronting his own band. But his skills as a studio rat shone every bit as brightly. As Something New brilliantly demonstrates, his demo recordings were highly polished, carefully-constructed works. And that means that this new collection is worthy of being experienced by those who might ordinarily give such releases a miss.

The title track is a full band recording, and it’s easily the equal quality-wise of either of Gold’s biggest hit singles. Most of the cuts on Something New are solo recordings in every aspect, but they’re not tossed-off songwriter demos: often as not they include – or at least imply – the ingredients that one would expect to find in a finished, designed-for-release recording. His beautiful piano and voice piece “The World Tomorrow Brings” really doesn’t need anything more added, though it’s not at all difficult to imagine where Gold might have taken the song in a full arrangement.

And the shimmering acoustic guitar of “You Are Somewhere Within Me” is a delight as well. Even though it features some wordless humming where – presumably – a lead guitar solo would go, it feels finished, or very close thereto. The country rocking “Prisoner” is one of the album’s full-band tracks, and features Kenny Edwards (guitar), Gene Garfin (drums) and bassist Peter Bernstein backing Gold – who plays piano and guitar – in sympathetic fashion. The vocal harmonies are swoonworthy, a bit like Dan Fogelberg at his best.

Remarkably, especially in light of his success to come, these tracks (all dating from 1973 sessions) haven’t seen the light until now. And only one of the tunes, “A Note From You” would be revisited on his self-titled debut album, released more than a year after these tracks were cut. The impossibly catchy “Don’t Bring Me Down” has the bouncy feel of “Thank You for Being a Friend,” and shows that at his best, Andrew Gold was in the same league as Harry Nilsson and other singer-songwriters of his era.

My personal preference among the timeless tracks on Something New tends toward the full-band recordings; those represent one-fourth of the material on the set. But they’re all lovely, and recommended. Making an excellent release even better, Omnivore’s release features a liner note essay from someone who worked with (and had a friend in) Andrew Gold, Peter Asher.