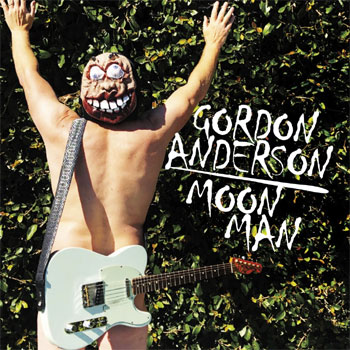 It’s sometimes said – and unfairly so – that people who are in the business side of the music business are essentially failed, frustrated musicians themselves. My own experience is different: some of my favorite musicians have a foot in both sides of the biz.

It’s safe to assume that most if not all of my friends and colleagues in the business – publicists, managers, label people and such – are musicians of some sort or another. I’ll admit, though, that I had no idea that Gordon Anderson is a songwriter. The head of Real Gone Music clearly has impeccable musical taste — just look at the material he’s chosen to reissue this last decade or so – but it turns out that he’s an appealing, insightful composer as well.

His new album, Moon Man, is full of what we must assume are story-songs drawn from his own life experiences. And those experineces are ones with which people of a certain age can most certainly relate: “Record Club” tells of the joys of getting eight albums for a penny (or whatever it was). “Funemployment” is as potted tale of how he started a record label.

“Pill Mill,” on the other hand, probably isn’t a true story. Sung (like most all of Moon Man) in the first person, it’s the tale of someone who fell prey to pill addiction. The tune’s languid tune has the scuzzed-out vibe of Exile-era Rolling Stones, which is more than fitting.

The Crazy Horse-ish, ragged-but-right feel of that tune is of a piece with Moon Man’s overall production aesthetic: the songs are well structured but carefully avoiding over-rehearsing and any sense of slickness. There are very little in the way of studio effects; the album sounds like a trio showed up to the studio knowing how it wanted its songs to sound, cut each one in a single take, and got out of there without breaking the bank.

“Palm Reader” is reminiscent of Jonathan Richman, but with a more sophisticated lyrical approach. “The Fall of Song” is as intriguing to read (the lyrics are all printed in the CD’s booklet) as it is to hear. “Pinpricks” has a melancholy feel not unlike The La’s, and it showcases, Anderson’s vocal range: He sure can hit those high notes. “Glazed Antique” is a catchy, rootsy rocker. The soaring “Shotgun Wedding” and “Siren Song” both give the band – Anderson, Richard Briglia and Kathryn Korniloff – a chance to stretch out a la Neil Young and Crazy Horse (again).

The album wraps up with a trio of shorter, more concise songs. The best is saved for last: the wryly humorous and endearing “Already Gone” (not the Eagles song) is about a man whose family is away for the weekend. What does he do? Freed or responsibilities, he drinks, fires up a joint and watches violent movies and sports. But as the song careens toward it end, he admits that he’s doing something else: planning a vacation with that wife and kid.

Even if you don’t know Gordon personally, listen to Moon Man and you’ll likely smile and think to yourself, “Hey, I know that guy!”