Before the (Family) Stone Age: The Viscaynes (Part Two)

Belying his eventual reputation as an erratic personality, the young Sly Stone was considered an engaging fellow. “He was a great guy,” Gebhardt says. In addition to being in the Viscaynes together, he and Sly “did plays together – he was a pretty darn good actor – and we played basketball and football.” Gebhardt says that Sly and Arellano in particular became very close friends. “Our group was like a family,” he says. “It wasn’t one of those things where you just come in and sing. We actually did things together all the time.”

Gebhardt’s memories of the teenage Sly Stone do, however, comport with one characteristic that would come to define the celebrated musician. “He did have a tendency to be late for things,” Gebhardt allows. “One of the reasons why we almost didn’t get to go to audition for the Dick Stewart Talent Show was that he was late.” Sly was late to arrive at some of the dances the Viscaynes had booked as well. “But we got to him to be a little more punctual,” he says. “We fixed that. At least until he left our group. Then, I think he went back to being … a little bit late.” 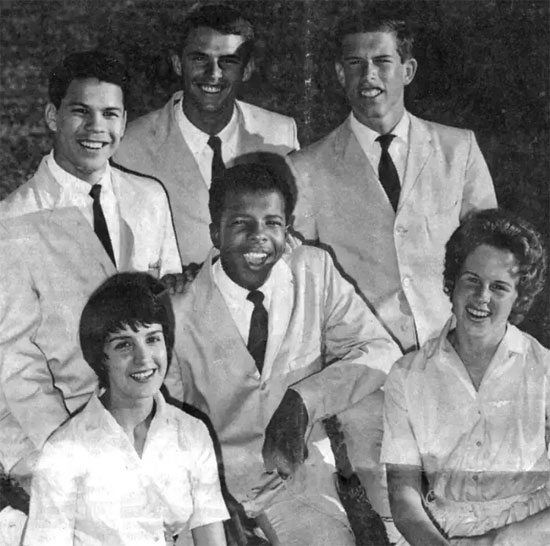 Looking back at the group – and viewing it from the outside – The Viscaynes seem remarkable for a number of reasons. Years before groups like The Rising Sons, The Mynah Birds and Love (and of course Sly and the Family Stone) would feature integrated lineups, this teenage vocal group was made up of a cross section of society. Gebhardt says that though the group included males, females, whites and African Americans and people of different faiths, “it wasn’t a big deal to anybody. Nobody cared; we just did what we did. We sang and we enjoyed life. The world might think it was a big deal, but we didn’t.”

Gebhardt allows that Sly and one of the other group’s singers, Maria Boldway “did have a little bit of a thing going on, but nobody [in the group] ever cared. That’s all I can tell you.” The idea that people of various races and ethnic backgrounds were somehow different never seems to have occurred to the Viscaynes and the friends in their orbit. “My dad was a football coach at the college,” Gebhardt explains. “He was always trying to recruit people, to get them to play football for him. So we had people at my house of every different race and breed that you can ever imagine.”

That kind of thinking meant that it wasn’t a big deal when – after the Viscaynes had ended – billed as The Hart Brothers, Gebhardt and brother Vern, were booked at the Milwaukee 13 Club in Hayward, California. “It was an entirely black audience,” he recalls. “But they liked what we were doing.” As far as the Viscaynes, Gebhardt says, “I’m very proud of the fact that we had that relationship and that whole deal of not worrying about ‘who’s who and what’s what.’ We just enjoyed it.”

Even though the group members were all in their teens, The Viscaynes scored some high profile gigs. “We played at the Carpenters’ Hall, which was gigantic,” Gebhardt recalls. But the young (and more than a little green) singers ran afoul of the grown-up world at that particular show. “I picked up a tambourine during our performance,” Gebhardt recalls with a chuckle. “And I got fined $50 – a lot of money back then – for picking up that tambourine, because I didn’t belong to the Musicians’ Union. You don’t break those rules when you’re in a union hall.”

Gebhardt says that The Viscaynes played at the Ranger’s Hall in Vallejo almost every weekend, and they performed a number of times at the Solano County Fairgrounds. “We did a lot of dances and proms and weddings,” he says. “We’d actually go up to other high schools and perform for them in their big auditoriums.”

But they ventured out of town quite often as well. “We did a number of shows at Travis Air Force Base,” Gebhardt says. “And we played a lot of places up in Lake County.” Even in small towns like Clearlake, The Viscyanes – all of whom were 16 or 17 years old – were booked together for overnight stays in in motels. “I guess they didn’t care that we were a mixed group, either,” he says.

Once the group had cut some records, there was demand for performances as far away as Los Angeles, more than 350 miles to the south. Everything happened in a whirlwind for the group; that may help explain why Gebhardt is a bit fuzzy on a few details. “I think we were at the Hollywood Bowl,” he says, “But I can’t remember.” He is, however, sure that the group appeared at the famed Whisky a Go Go on the Sunset Strip.

The opportunity to cut records came about through winning of talent shows. “They were like the American Idol or The Voice of today, in miniature format,” Gebhardt explains. The Viscaynes scored a trophy for taking first place at one hosted by TV personality Dick Stewart of KPIX Dance Party. “We had to [complete] every weekend up and down the state of California,” Gebhardt says. “I still have the trophy. It’s about six inches tall.” After the group won that contest, a record contract was inked. “We didn’t get involved with that,” says Gebhardt. Parents and lawyers took care of that stuff; I don’t even know what the contacts were.” He notes that the members of the group “never made any money” off of the contract. But they did earn the right to record a pair of songs.

In the summer of 1961, Gebhardt had a summer job with the Vallejo Unified School District, cutting grass. One day he was mowing a lawn when his parents showed up. “We’ve got to go to record,” they told him. They headed to a studio in the basement of the Geary Theatre in San Francisco’s Theatre District.

Several hours passed before the group – backed by The Continentals – waxed suitable recordings of “Stop What You Are Doing” and “I Guess I’ll Be.” “It took awhile to get what [the producers] wanted,” Gebhardt says. “But they finally got it.” Viscaynes vocalist Charlene Imhoff took the lead on the latter song. The 45 r.p.m. single was released in October ’61 on the tiny Tropo Records label, and it soon got some airplay on Bay Area Top 40 station KYA-AM.