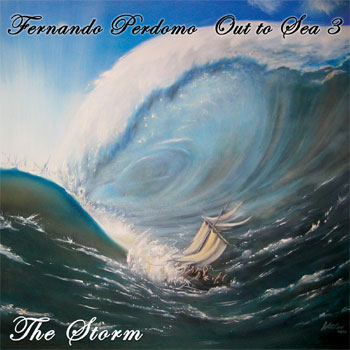 To the list of artists who release stunning amounts of material – Robert Pollard, R. Stevie Moore – we must now add Fernando Perdomo. The guitarist-producer has been on quite a tear since relocating from southern Florida to Los Angeles some years back. In addition to producing other artists, engaging in tribute and collaboration projects and playing as a live sideman (that’s him onstage with the hat in Echo in the Canyon), Fernando has been releasing plenty of his own records.

Subtitled The Storm, his latest is the third in a trilogy (well, unless there’s eventually a fourth, fifth, sixth…) called Out to Sea. And speaking of hats, the one he wears this go-round is that of a progressive rock instrumentalist. It’s all Fernando all the time (except for one track on which his girlfriend adds some textural color.

The styles in which Perdomo trades have hints of everything from Queen crossed with Todd Rundgren (the title track) to space-rock (“Wonder”) to Klaatu (“Cycles”) to Yes (“The Great Known”) to modern progressive rock (“The Storm”) to early Utopia (“Frenzy”) to…well, you get the idea. Eleven tracks, all original, all tasty, yet all examples of Fernando Perdomo unashamedly wearing his influences on his sleeve. But because he distills those influences through his own unique musical personality, the entire affair is most worthwhile and memorable.