Home  »  Americana • interview   »   Zoe & Cloyd: Looking Out for the Future of Appalachian Music

Zoe & Cloyd: Looking Out for the Future of Appalachian Music

This story appeared previously (in 2019) in Bold Life Magazine. The duo has since released another album. 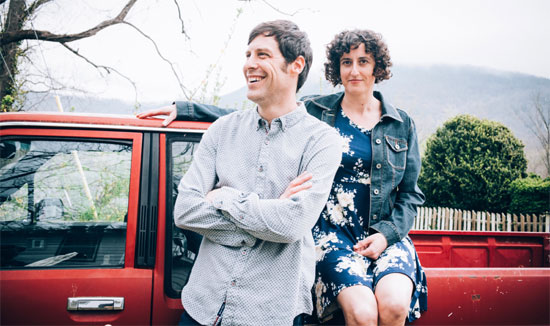 Zoe & Cloyd are wife-and-husband musical team Natalya Zoe Weinstein and John Cloyd Miller. Together they make what they call “new Appalachian music,” a subtly updated take on traditional mountain music. After leaving popular trio Red June – with whom they still regularly reunite – the duo released Equinox in 2015, followed by 2017’s Eyes Brand New. A third full-length release is due later this year; Zoe & Cloyd’s preview single, “Looking Out for You and Me” was released in March.

How would you differentiate your “new Appalachian music” from other styles? What makes it unique?

John Cloyd Miller: Natalya and I come from opposite ends of the Appalachian region; our home towns are 800 miles apart. Within that region, there are a myriad of musical influences. We think of our music as a synthesis of as well as a continuation of tradition: bluegrass, old-time and folk elements with little dashes of other things as well, such as rock and, increasingly, klezmer. And as songwriters, we’re always trying to say something new while staying true to our roots.

How does your classical background inform your approach to Appalachian folk music?

Natalya Zoe Weinstein: I studied classical violin for 15 years before switching to fiddle music. It gave me a really great foundation in terms of intonation, tone production and understanding my instrument. However, I’ve had to “unlearn” many techniques over the years. I’ve had to loosen up my playing to more accurately interpret the subtleties of bluegrass and old-time music.

The new single addresses environmental and other large-scale concerns. What led to the writing of that song?

John: It’s always felt disheartening to me when our society puts profits and short-sighted gain before the health of people and the planet. Considering the wealth and influence of this country, we have a responsibility to be a positive force in the world. Sustainable environmental and social policies need to part of our future if we are going to survive as a species.

Is it ever challenging being a married couple who also write and perform together?

Natalya: Yes, it’s certainly challenging to be a married couple and parents as well as music and business partners. It’s sometimes difficult to balance the needs of your spouse, your child, the business, the music, your personal needs, the needs of your relationship, etc. That said, it’s also uniquely rewarding when it all works out, and it’s wonderful to be able to share something we’re passionate about.

You still do occasional gigs as Red June. How does that group’s repertoire and approach to music differ from what you do as Zoe & Cloyd?

John: The Red June sound is very much tied in with Will Straughan. That’s why we chose not to keep the name when Will decided to take a break from music and pursue other opportunities. That band has always been a balancing act of everyone’s musical tastes. Zoe & Cloyd tends to be a little more traditionally based. That said, we are two-thirds of Red June, so inevitably there’s some degree of overlap stylistically.

You play in a number of different situations. What are the advantages and disadvantages of the different types of gigs?
Natalya: We love playing in all different types of settings. Recently, we played in a beautiful concert hall to an audience of 250 people with the full band, and then two days later performed as the duo at a house concert for around 60 people. The bigger venue means more visibility, great sound and lights, but the house concert is a more intimate setting; we’re able to connect with people on a personal level. And that’s a real trea