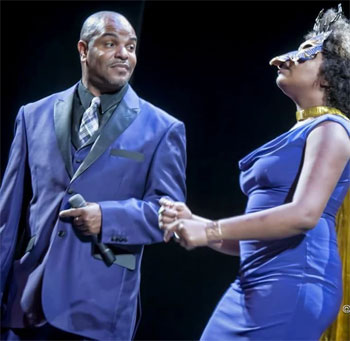 Ryan RnB Barber is one of the busiest musicians in Western North Carolina. He does it all: singing, rapping, songwriting, producing and arranging. And he stays busy with several bands (including BoogiTherapi and Orange Krush), participation in open mic/jam nights, and as a member of Grammy award winning kid-hop artist Secret Agent 23 Skidoo’s band.

But even with all of that activity, Barber has managed to put together and release a solo album, Rejuvenation. All nine cuts on the new album are Barber originals, and other than guitar on two tracks and some tasty horn work by the AVL Funk Horns, Rejuvenation is a one-man show.

Barber grew up in the tiny North Carolina town of Wilkesboro, best known as the home of the annual Merlefest music festival. But his own music bears the influences of soul, funk, gospel, hip-hop and rap. He comes from a long line of musically inclined folks. “Everyone in my immediate family can sing,” he says. “We all grew up singing in church and in choirs. I would sing national anthems at football and basketball games.” Some extended family members had a funk group that was invited to appear on Soul Train. “I definitely come from a musical family,” Barber says.

And that musical talent comes naturally; other than taking a few piano lessons when he was young, Barber is completely self-taught. Even the harmonies on Rejuvenation – sometimes stacked three and four voices high – are the product of Barber honing his skills on his own.

In the best possible way, Rejuvenation is all over the musical map. From the sweet soul of “Fun Tonight” to the funky “Parkway Drive,” the album is a showcase of styles. Barber emphasizes that the record’s variety is intentional. “I wanted to show people that I’m not a one-dimensional artist,” he says.

Providing contrast to Rejuvenation’s musical variety, there’s a unity of purpose within the album’s lyrics. “A lot of music these days – especially urban music – has anger and negativity,” Barber says. His new album is designed as an antidote for that. “I wanted to go the opposite route, making music that makes people feel good, get up out of their chair and dance, smile, laugh and have a good time.”

It may come as a surprise to learn that Barber – a personality well known regionally for his uptempo stage presence – used to suffer from performance anxiety. While he had been recording at home for a number of years, Barber only started playing live in 2007. “I was a very shy person with severe stage fright,” he admits. “But once I got used to it, and the more I saw that people were digging what I was doing, it became addictive.” Today he’s an engaging and seemingly effortless performer, comfortable fronting his various bands.

Along the way, Barber has received plenty of advice from friends and fellow musicians. Some of the best advice he ever got was from the now-departed local music figure Jeff Knorr. “He taught me a lot about making sure other people in the band band have a focus, and making sure the crowd sees that,” Barber says.

Over the last decade-plus, Ryan RnB Barber has accumulated his own wisdom, too. He offers some advice for aspiring musicians looking to make it on today’s ever-changing music landscape. “A lot of people think that a solid work ethic just means creating your music at home and putting it out on social media,” he says. “But it’s so much more. You have to hustle gigs, and step out of your comfort zone.”

And despite Asheville and Western North Carolina’s reputation as a challenging market for musicians, Barber is – true to form – optimistic. He believes that if you’re a musician who “shows up on time and has integrity and talent, it’s going to be super easy for you to maintain work here.”