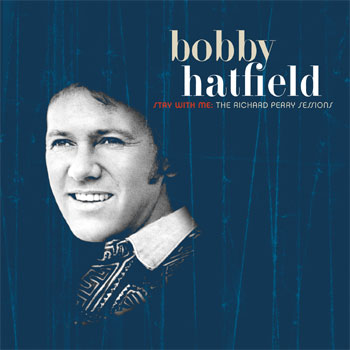 The history of popular music is scattered with tales of aborted projects, albums that for one reason or another never saw the light of day. Though it finally saw a kind of official release in the 21st century, the Beach Boys’ SMiLE is perhaps the most famous white whale of them all. And in that case, although most of the bits and pieces from the project had long circulated in bootleg form, the belated release was worth the wait. It was as much of a (flawed) masterpiece as its reputation suggested. Harry Nilsson’s final recording project – done in close collaboration with Mark Hudson – is another. It doesn’t rise to quite the same heights as SMiLE, but as recent completed and released by Omnivore Recordings, it’s quite good. Read more about it here.

Speaking of Omnivore, the label has recently unearthed another such recording. I’m not to going to argue that it’s the creative equal of SMiLE, nor will I suggest that it’s on a par with Harry Nilsson’s Losst and Founnd. But Bobby Hatfield’s Stay With Me is well worth checking out.

Hatfield, of course, came to fame with Bill Medley as the Righteous Brothers. That blue-eyed soul (<wince> we need a better term for that) duo scored a succession of hits, the undisputed best of which is the transcendent 1965 side “You’ve Lost that Lovin’ Feelin’” produced in all its glory by Phil Spector. There were many other gems in their catalog as well.

Though the Righteous Brothers’ winning streak was long, the duo split in 1968. Hatfield – who already had an impressive track record as a solo act thanks to his ‘65 single “Unchained Melody” – first attempted to continue under the Righteous Brothers name with co-vocalist Jimmy Walker, but neither that pair’s sole album Re-Birth or either of the singles released from it even made it onto the record charts. They split soon after the album’s release.

Hatfield then cut a solo single, “Only You” (a cover of the Platters’ hit) and released it in 1969. It scraped the lower rungs of the Top 100. Two years later he released what would turn out to be his only solo long-player, Messin’ in Muscle Shoals; though the Rick Hall-produced record earned positive reviews, it fared no better on the charts than his single had.

But he persisted, as one does. And for his next planned project he worked with another well-known and respected producer, Richard Perry. Perry had proven his creative skills in the studio working on albums by a wildly diverse array of artists including Captain Beefheart, Tiny Tim, Barbra Streisand, Fats Domino and the aforementioned Nilsson.

Sessions for Hatfield’s planned album began at Apple, the studio owned by the recently-disbanded Beatles. Working there, Perry was able to round up an jaw-droppingly impressive assemblage of musicians that included Klaus Voormann on bass, Ringo Starr on drums, Al Kooper on keys and guitar, Chris Stainton on organ, and horn players Bobby Keys and Jim Price.

Hatfield wasn’t primarily a writer; the only original tune from the Perry sessions was “Rock’n Roll Woman” (not the Buffalo Springfield song); it would be released as a single, as would two other tracks from the Apple sessions. But for the most part, Perry and Hatfield chose to take the approach favored by vocal interpreters like Frank Sinatra and Linda Ronstadt, picking and choosing existing material and bending it to Hatfield’s style.

That approach resulted in some perhaps unlikely choices. Marvin Gaye’s “Baby Don’t You Do It” had already been covered by The Small Faces, and The Who included it in their early ‘70s live sets (they cut a studio version at roughly the same time as Hatfield did). The Band would record it in 1972. And while Hatfield’s vocal reading of the classic isn’t as aggressive as Roger Daltrey’s, it’s sold stuff, and its two takes included are highlights of Stay With Me.

The Beatles had attempted George Harrison’s “Sour Milk Sea” during sessions for their 1968 self-titled double-LP, but gave up. Harrison brought the song to friend and associate (and Apple artist) Jackie Lomax for his album Is This What You Really Want?, another all-star-backed LP. Hatfield seems a bit out of his element singing along to a somewhat plodding and nondescript backing track, but it’s at least interesting.

Most bizarre, perhaps, is “Oo Wee Baby, I Love You,” a tune that appears three times on the newly-released Stay With Me. Two of those recordings are previously unreleased. Like most (but not all) of the tunes from the Perry sessions, it features a slightly muddy production vibe, but what makes it notable is that its opening lick is lifted straight off of the Beatles song “Get Back,” a tune with which Ringo had some experience.

Nearly as unexpected is Hatfield’s cover of a then even newer song from George Harrison, “What is Life.” He and the players approach the song twice, in very different arrangements. One is fast, the other much slower. But both are quite different from the version on All Things Must Pass. The vocal takes are a bit rough, and the musicians play it first in a style more reminiscent of Booker T & the MGs and again with an even more laid-back vibe.

Other tunes include Cole Porter’s “In the Still of the Night” and “Run to My Lovin’ Arms.” The title track in its finished state (released as a single) approaches the arrangement style of Spector. It didn’t chart.

If you’ve read this far, you may well be expecting some mention of why these sessions didn’t result in a released album. Guess what: I don’t know. Neither does producer Richard Perry, though writing for the new release’s liner notes Roger O. Thornhill tells us that the commercial failure of the single lessened any incentive to complete an entire album.

By 1974, apparently Hatfield was broke and living in an apartment. He was receptive to Bill Medley’s overtures, and the Righteous Brothers re-formed. The pair continued to work together sporadically, often re-recording their old hits. Hatfield died in 2003 in a very rock’n’roll fashion: heart attack brought on by cocaine overdose before a planned concert.