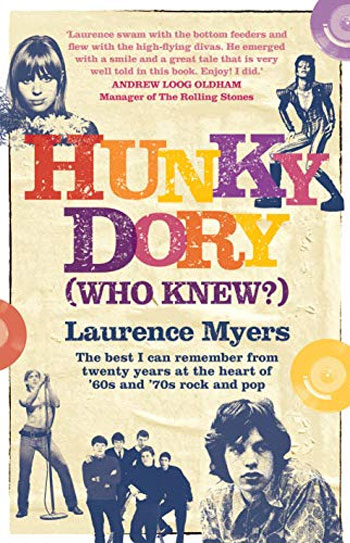 When you get right down to it, everybody has a story to tell. Some tales have almost universal appeal, while others are possessed of niche quality. And there’s not really a direct correlation between how compelling or engrossing a story might be and the likelihood that one can score a book deal to write it.

Take me for example: I’ve been working with a friend who’s almost a Zelig figure in rock ‘n’ roll history — well, quite much more than a Zelig, because he was an active participant – and we’ve so far not been able to land a publisher. But we shall persist, because — trust me on this – you’ll want to read it.

And even if one does have a story to tell and manages to convince a publisher, that doesn’t mean one can, y’know, write. Against that backdrop, you perhaps wouldn’t expect an accountant to pen a lively account (as it were) of working closely with some of the biggest names in music.

Alas, as history teaches us again and again (see: March and April 2020) the world is full of surprises. Laurence Myers’ book, Hunky Dory: Who Knew? is just such a revelation. Subtitled “The best I can remember from twenty years at the heart of ‘60s and ‘70s rock and pop,” his book is a true page-turner. The shortish chapters move through his life and career, and while you almost certainly don’t know his name, you know most every other character discussed in his book.

Myers has a keen, sharp memory, an eye for detail, and a well-developed wit. That means that Hunky Dory: Who Knew? is reliably funny – sometimes laugh-out-loud funny – and endlessly fascinating. Read it and you’ll learn things you never knew (but may well have expected!) about the likes of Jeff Beck, David Bowie, Mickie Most, the Rolling Stones and scores of others. You’ll also get a window into the machinations of the music business, equal parts opportunism, cynicism and creativity.

Most interesting of all perhaps is Myers’ perspective – hard-won at that – on a few figures who, shall we say, aren’t held up as exemplars of good behavior. Bowie’s Mainman manager Tony Defries is one.  But the big one here is Allen Klein, he of the careers of Sam Cooke, the Stones, the Beatles and other giants. Myers’ characterization is at once unflinching and even-handed. And it serves to make the point that no one* is all bad.

(Well, come to think of it, Don Arden doesn’t come off too well. But then he wouldn’t, would he?)

Laurence Myers resists any temptation he might have had to paint himself as above reproach and blame-free: he readily admits that we have him to thank for low-budget (and often lower-quality) albums hawked on late night television; with rakish wit, he acknowledges that the whole scheme was little more than a cash grab.

His near-misses are a running highlight of Hunky Dory: Who Knew? as well: the times in which he passed up on an opportunity, allowed an artist to get away right before they made it big, and similar tales are recounted in vivid and entertaining detail. And he’s a masterful storyteller. The words fly off the page, and the reader can all but hear his voice. Put another way, Myers’ writing style is delightfully conversational; these stories sound not unlike they would if told to you over a fine dinner and expensive, carefully-chosen wine, told by an articulate, erudite and just damn funny friend. Highly recommended, even if one isn’t into reading about the behind-the-scenes stories of popular music.

* current resident of the White House most emphatically excepted