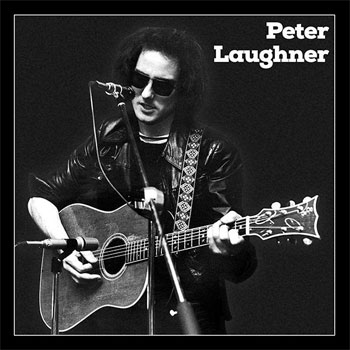 Chances are good that you’ve never heard of Peter Laughner. And if you’re immediately replying, “Oh, yes I have!” then chances are good that you know of him via his time with Rocket from the Tombs. RFTT was one of those seminal acts whose influence far outstripped beyond their popularity, sort of like a less-well-known Velvet Underground.

In any event, RFTT was important. The Cleveland band was a precursor to Dead Boys (a kind of American corollary to Sex Pistols) and Pere Ubu (dada art-punk). And Peter Laughner was a giant in the Cleveland scene, as a member of both Rocket From the Tombs and then Pere Ubu. His songwriting and musical vision extended far beyond art punk, though. Laughner died in 1977, but perhaps surprisingly, he left behind a wealth of unreleased material. Thank goodness, because despite his importance and influence, he worked in the recording studio on very few occasions, and only with Pere Ubu.

So here we are well past 40 years after this passing, heralding the release of an expansive boxed set titled Peter Laughner. It’s chock full of previously-unheard Laughner in all manner of contexts. The first of five discs is subtitled Fat City Jive / 1972. Half of the disc is taken up by a top-quality recording of The Original Wolverines, an acoustic trio, profiteering live on WMMS-FM’s “Coffeebreak Concert.” The Laughner-led trio is in full-out folkie mode, playing an eclectic set mostly of covers. The instrumentation is finely-tuned yet basic – guitars, piano – and Laughner sings with good-natured gusto. The second half of that first disc features Laughner accompanied by Mike Sands from the Original Wolverines, later that same year and again ion WMMS. It’s a bit more energetic and – though still acoustic – slightly more rocking in its feel. The artists covered on Disc One include Lou Reed (“I’m Waiting for the Man” and “That’s the Story of My Life”), Bob Dylan, “Love Minus Zero” and “Please Mrs. Henry”), Jackson Browne, John Sebastian, Arthur “Big Boy” Crudup and Lowell George. Laughner’s original “Solomon’s Mines” holds us quite well against those classics.

Peter Laughner‘s second disc is subtitled One of the Boys / 1973-1974. It’s different from the first disc in most every way. The recordings are drawn from live sets recorded by two of Laughner’s bands, Cinderella Backstreet and Cinderella’s Revenge. If you dig Velvet Underground and Mott the Hoople, you’ll love this disc. Laughner’s bands cover both groups in a way that demonstrates their understanding of what that music is about. The musicianship is top-notch, played by full band with keyboards. The fidelity is at the high end of bootleg quality: quite listenable but not of studio quality.

Pledging My Time / 1973-1977 is more of a grab bag, drawing from solo acoustic home recordings, and demos made variously with Albert Dennis, Wally Wefel, an another WMMS performance. Using this set as a primary reference, it would seem that Laughner truly came into his own as a songwriter during this period; nine of the disc’s 112 tracks are original compositions. There’s an undercurrent of melancholy and despair in tracks like “First Taste of Heartache,” “Sylvia Plath” and “Baudelaire.” Fidelity varies depending on source, but is generally of good quality.

The same time period is explored from an electric side on the disc’s fourth set, Rock It Down / 1974-1977. Noisy rock ‘n’ roll is the order of the day, and the tracks make plain that Laughner absorbed as much influence as he exerted. More Lou Reed covers (“What Goes On”) alongside covers of then-contemporary tracks by Jonathan Richman (“Pablo Picasso”) and Television (a snaky “Prove It,” by a band called Friction, featuring Anton Fier). A raucous Rocket From the Tombs recording, “Ain’t It Fun” is a highlight of the disc. This disc features the roughest audio quality, but its historical importance more than offsets any concerns. RFTT fans may find this the most engaging set of songs in the collection. 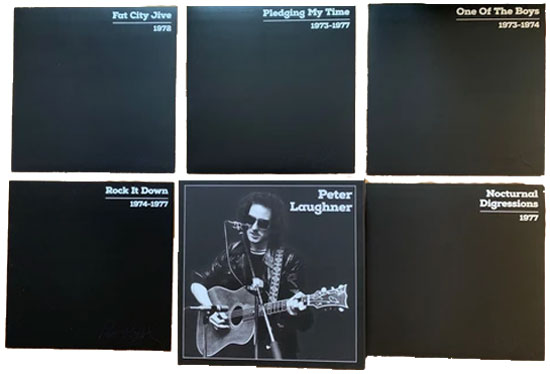 There are unverified reports that Laughner was mooted as a replacement for Richard Lloyd in Television, though Lloyd insists otherwise. Regardless, Laughner had a strong Television fixation: his seething acoustic reading of “See No Evil” on the set’s fifth and final disc (subtitled Nocturnal Digressions / 1977) suggests that he would have fit nicely into the group, perhaps taking it in a slightly different direction. On that recording he’s joined by another legendary figure, Lester Bangs. He also covers Tom Verlaine’s “Come On In,” Richard Hell’s “Blank Generation” the Rolling Stones’ “Wild Horses,” Eddie Cochran, Van Morrison, Robert Johnson and – yet again – Dylan and Reed. His guitar ability is shown to its best effect on this disc. And since it’s all acoustic, the lo-fi sound quality isn’t distracting. The entire disc is sourced from a single solo recording made at home in June 21, 1977. Laughner died the next day.

The retail version of Peter Laughner includes a 100-page book filled with Laughner’s writings, poetry, album reviews and photos. Released in August 2019, the set was initially made available on CD and vinyl from Smog Veil Records, but as of December ’19, the CD sets were sold out, and the label announced that “there will be no repress.”