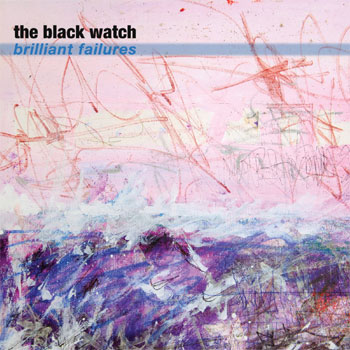 John Andrew Fredrick is one prolific artist. It seems that every few months a new album from his group, The Black Watch, appears on my desk. And he stands apart from other super-prolific musicians in a very important aspect: though much of their work is superb, R. Stevie Moore and Robert Pollard (to name two) tend not to edit out their weaker material in favor of their best output: they simply put it all out there. In Fredrick’s case, I have no idea if he shares that approach. But what I do know is that his output is of a consistently high quality: all killer and no filler.

The titles of The Back Watch’s latest release, Brilliant Failures, might be an inside-joke acknowledgment of the fact that the group doesn’t shift major units. Perhaps not. But the crystalline, intimate vibe of songs like “Julie 2” deserves to be heard by a wider audience. Gentle acoustic picking, Fredrick’s close-miked voice and soaring, sustained electric guitar reminiscent of Robert Fripp’s Frippertronics are hallmarks of the tune.

But Brilliant Failures isn’t afraid to rock, either. “Crying All the Time” is chiming, heartfelt indie rock of the highest order. Fredrick and his band sometime sound a bit like San Francisco band Translator here, but in the end they have their own character. The title track is redolent of ‘80s and ‘90s British rock, but never sounds like it’s consciously trying to sound like that.

Every song on Brilliant Failures has its own charms; the record is varied yet it holds together as a whole. If the Smiths had been less mopey, if Echo and the Bunnymen has been more down-to-earth, they might have made music that sounded like The Black Watch. Thank goodness Fredrick and his band mates are here to do it. And do it again.