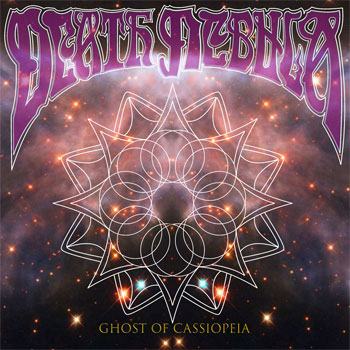 If one were to make some sweeping generalizations about doom metal, first among those might be that the artists making it build a sound around a core of guitar/bass/drums, and that they top it off with screaming, essentially indecipherable vocals. (Among fans of the style, the latter is a feature, not a bug.) But as with every rule, there are exceptions.

One such outlier is Asheville-based Death Nebula. The four-man group operates on the fringe of the genre through its inventive use of sampling, synthesizers, looping, MIDI technology; all of these are tools and techniques found only occasionally within the doom metal world. For that reason, the group defines itself more specifically as acid doom metal, a “layered hybrid of psychedelia and doom.”

The opening track, “Gamma” starts off with a stuttering drum loop and a hypnotic instrumental bed. Sampled bits of dialog are folded into the mix. Only after a minute does the entire band kick in; when it does, those comparatively subtle sonic elements fall away to reveal a thunderous and clattering speed-metal arrangement. The drums and bass pummel with searing intensity; the lead guitar figures move to the center of the aural space, and unintelligible roaring vocals begin. Pop conventions like verses and choruses don’t seem to figure prominently in the track.

In the song’s midsection, Scott Wallace’s lead guitar peels off some melodic runs, occupying the space in which a chorus might typically appear. Then the screaming returns. The band’s description of Ghost of Cassiopeia suggests that there’s a story line to be found within, but perhaps only those finely attuned to this style of vocal delivery will be able to discern actual words. As the song roars toward its end, something more closely akin to a melody surfaces, but only briefly. Sonic mayhem is the order of the day.

It’s the music that carries things forward. Boyd’s screamed vocals can be thought of more as a textural element than a means to deliver lyrics. But admirably, he shows that he is possessed of more than one style. “New Trip” shows the band making a kind of space rock, with a swirling sound comprised of sustained guitar notes and – on the verses, at least – vocals of a more conventional (read: melodic and intelligible) variety. Dan Murtha’s bass emerges from the mists of the arrangement, revealing itself to have power and subtlety in equal parts. Certainly “New Trip” still maintains a requisite amount of chugging, drop-tuned guitar riffage and screaming, but as a whole it has more subtlety than one might expect to encounter.

“Spacejam” travels to another place entirely. A synthesizer evokes the texture and character of a violin, and effects buried deep in the mix evoke thoughts of haunted shouts deep in a misty forest. The signature instrumental melody that occupies the first minute-plus of the track is the strongest yet. Like the tracks before it, “Spacejam” eventually shifts gears into more a standard-issue screamo/doom style, but the track offers enough variety to satisfy those who want more from their music.

“Burnpit” initially takes things at a grinding, glacial pace. A dissonant guitar melody introduces a thunderous, martial break. When Boyd comes in on vocals, he takes on a character that sounds as if it’s exhumed from the bowels of Hades. He spars intensely with Wallace’s guitar leads as the rhythm section pummels along at a maniacal, breakneck pace. The track ends with squalls of distorted guitar.

Ghost of Cassiopeia closes with its most melodic track “Quasar Nebula.” The drum loops and bass provide a foundation atop which Wallace layers multiple guitar parts. Those guitar lines are dramatic and melodramatic. Boyd’s voice is deep in the mix, but for much of the track he’s singing in a straightforward manner. As the track enters its second half, however, everyone involve frees themselves from any semblance of restraint: the instrumental component is punishing, and Boyd lets loose a paint-peeling (and vocal cord shredding) performance. As “Quasar Nebula” roars toward its conclusion, the group executes a series of deft instrumental turns. A few more unison stabs and it’s all over.

Dramatic delivery, tight ensemble playing and the amount of angst and fire one would expect from a doom metal band are all in ample supply on Ghost of Cassiopeia. Death Nebula clearly aims to have it both ways – trafficking in a doom metal style yet taking the music other places – and with the group’s debut EP, it succeeds on that score.