Prepare Yourself: Porcupine Tree’s ‘The Sky Moves Sideways’ at 25 (Part 1) 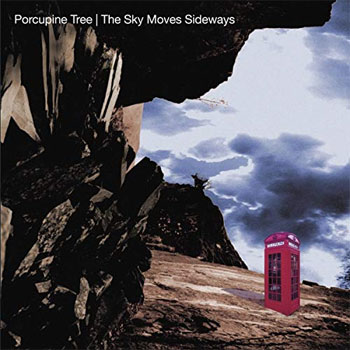 Today, Steven Wilson is widely known –and acclaimed – as one of the busiest and most creative figures in music. Though he came to wider notice as a kind of progressive rock hero, helming remix/remaster projects for some of prog’s most beloved albums, he has always been about much more than art rock. His muse is simply too expansive to fit into a single genre classification.

All that said, a quarter century ago, Wilson was working safely under the radar. Though he created Porcupine Tree as a kind of inside joke – it wasn’t initially a real band; merely a label for the music he was making on his own – by the middle 1990s it had evolved into a proper quartet that played on the records and toured to enthusiastic audiences.

And the kind of music that Porcupine Tree at that time made might not square up with the preconceptions of later-day listeners who were drawn in by the prog-metal textures of the band’s final three studio long-players, 2007’s Fear of a Blank Planet, the EP (but album by any other name) Nil Recurring from the same year, and the band’s powerful swan song, 2009’s The Incident. In 1995, Porcupine Tree released its third official album, The Sky Moves Sideways. Unlike later hard-edged efforts, that record is an exemplar of the kind of ethereal space rock that would win over fans of Pink Floyd‘s post-Syd Barrett and pre-The Dark Side of the Moon period.

In interviews, the reliably voluble and articulate Wilson always had – and has – plenty of value to say. He’s always enthusiastic about naming his influences, be they Beach Boys or/and Scandinavian death metal. “Each of those things has changed the direction of the band in a natural, organic way,” he told me in 2010. But he has generally bristled at Pink Floyd comparisons. Still, while there are numerous similarities between the music of pre-fame (read: non-charting) Porcupine Tree and the Floyd, The Sky Moves Sideways succeeds on its own merits.

Not to make too much of the similarities, but Sideways is built around a single, lengthy composition with several movements, split into two sections. That approach may remind some listeners of Wish You Were Here, with its milt-part “Shine On You Crazy Diamond.” But while there are structural similarities between the two, Wilson isn’t aping Pink Floyd with his compositions.

The stuttering drums that characterize large swaths of “The Sky Moves Sideways” Phases 1 and 2 come courtesy of Porcupine Tree’s first drummer, Chris Maitland. (Previously, Wilson had used a drum machine and/or played the percussion parts himself.) Though he would be dismissed from the group in 2002, he had been – and would continue to be – an occasional Wilson collaborator. Maitland can be heard on recordings from No-Man, I.E.M. and Blackfield, all Wilson side projects. While Maitland’s work doesn’t have quite the distinctive character of his successor Gavin Harrison (currently of King Crimson), it can be argued that his style – with shades of Nick Mason – is perfectly suited to the Porcupine Tree material of the 1990s.

The extended title track set pieces on The Sky Moves Sideways alternate between glacial, near-liquid soundscapes and energetic, throbbing passages; the former owe a debt to Tangerine Dream and other krautrock influences, while the latter have more in common with latter-day rave-oriented acts like The Orb. Theo Travis – another perennial Wilson associate – adds some compelling flute work to “The Sky Moves Sideways Phase 1.”

Throughout the album, Wilson’s gentle, precise acoustic guitar nicely balances the electronic textures of the album. There are plenty of soaring lead guitar passages, but it’s the pastoral vibe of the acoustic on cuts like “Spiral Circus” (the fourth part of “The Sky Moves Sideways Phase 1”) that helps unify the album.

Another dollop of sonic glue is provided by Richard Barbieri (formerly of art-rock group Japan); his majestic keyboard work is rarely if ever showy, and he’s not at all about dazzling solos. Instead, his role on The Sky Moves Sideways is to provide an atmospheric bed upon which the arrangements can comfortably lie.

That does, however, give him comparatively less to do on aggressive, guitar-centric numbers like “Dislocated Day,” a fiery track that preview the more metallic direction Porcupine Tree would (sometimes) follow in the future. Launching with a telephone ringing – Perhaps Mr. Floyd calling for Mrs. Floyd again? – but his Mellotron-styled sounds contrast wonderfully with the blistering instrumental riffage that serves as that track’s chorus. Wilson overdubs multiple guitars, each playing its own solo, and the result sounds more like an argument than anything else.