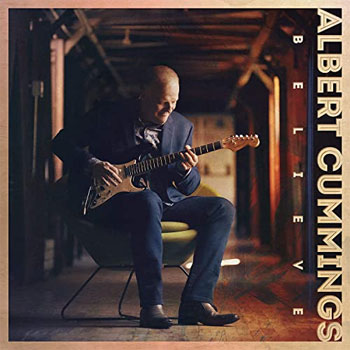 Albert Cummings began his recording career in 2000 with The Long Way; his latest, 2020’s Believe is the eighth release from the blues guitarist/singer. The album mixes originals with classics; the latter choices skirt the edges of the blues idiom, but the blues feeling – -its ineffable quality – is there in ample supply. A cover of Sam and Dave’s “Hold On (I’m Comin’)” -written by the mighty Memphis team of Isaac Hayes and David Porter – is a prime example. As Believe‘s opening track, it features an arrangement not miles away from the ‘60s original, but Cummings heightens the blues character that has always existed within the tune.

Tunes like Cummings’ original “Do What Mama Says” don’t aim to break new ground. What they do instead is deliver on the style that has worked well for this artist. The song’s structure and phrasing are more than a bit reminiscent of Al Green’s “Take Me to the River,” but there’s not a thing wrong with that.

Cummings and his sidemen and women work in a Memphis style throughout the album; the soulful quality of the music is consistently engaging, and the tasty horn charts and female backing chorus are all note perfect. In his liner note message, Cummings makes plain that the inspiration for this project was the influence that FAME Studios has on him. He recorded the album there with producer Jim Gaines. Even when Cummings is cranking out straight blues like Willie Dixon’s “Red Rooster,” the Bluff City flavor comes though.

Fans who return to Cummings’ album to hear him tear up the fretboard won’t come away disappointed; his Stratocaster soloing is all over the record, especially on “Red Rooster.” Some unexpected dig-deep choices reveal just how wide a stylistic breadth Cummings has: to wit, his readings of Leon Russel’s “Me and My Guitar” and Van Morrison’s “Crazy Love.” He makes both his own, and isn’t afraid to lean into a gospel feel (on the Morrison track) that finds him putting down his guitar. The results are sweet and soulful, with a feel reminiscent of Delaney and Bonnie.

There’s an immediacy to the sounds on Believe; this isn’t the overly slick blues too often found on new releases. Instead it’s polished but real and sincere. Borrowing a title phrase from one of the album’s standout originals, it’s all good. And that ain’t bad.