More from My Conversation with Andy Powell of Wishbone Ash

Here’s bonus content from my conversation with Andy Powell, founder and co-lead guitarist of Wishbone Ash. We spoke just moments before the band took the stage in Würzburg, Germany as part of a triple bill that also featured Uriah Heep and Nazareth. Prior to the pandemic, the band was on tour in the U.S. in support of its latest album, Coat of Arms. (The original feature is here.) 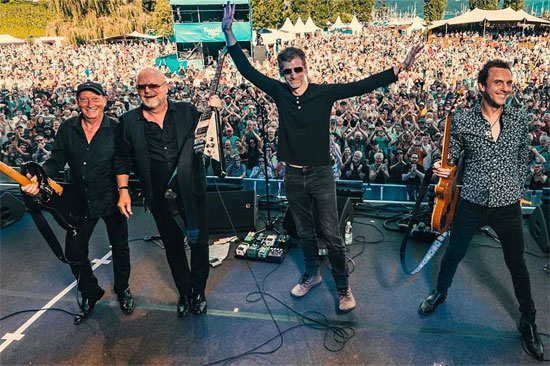 Bill Kopp: One thing that I’ve noticed on Wishbone Ash albums is that there’s very little in the way of keyboards. Has it been a conscious decision sort of from the beginning to sort of steer clear of keys, or has it just sort of worked out that way?

Andy Powell: Well, I love keyboards. But know but we’re always conscious that we need to represent on our music on stage, so when we construct a new piece of music, we want the guitars and bass to provide as much sound as we can. And that really assists in the clarity of the lines. There’s space, there’s dynamics in our music. A lot of guitar bands are laying to the wall with a lot of guitar playing; it just comes at you, you know? But we’re all about dynamics and melody. Sometimes on records you do need a little bit “chordage,”, shall we say, to back up the leads, and that might be where we bring in a keyboard or two. But really, [we use them] much more as a flourish or something like that.

About 7, 8, 9 years ago, there was a fair amount of legal wrangling around the status of the band name. It seems that you managed to get that all sorted out now. Did that back and forth during that period take your attention away from the music?

Well, it was 5 years in process. It was about a $500,000 lawsuit. That’s bound to divert your attention, but thankfully what did hold me together was just having a just constant flow of live dates and live music. It was quite daunting because I had to go to court to prove the fact that I had never left the company – that I’d never quit on it – and everyone else had. And unfortunately for them, they were trying to prove that they had ownership, that they could take ownership even though you resigned from it and that just wasn’t the case.

But we had to go to court to prove it, and eventually I won. It was something that had to be done because there was confusion in the market. The promoters were saying, “Hey, you guys gotta sort this out.” And business was being affected massively. I understand the emotional attachment of some of the original band members to the name, but in the case of the gentleman that I went up against, he was out of the band for 18 years! So that’s a long shot to suddenly go, “You know what? I do like being in a band again.” Sorry buddy, it don’t work that way.

The thing of it is, us rock and rollers, we are in the music business, the business of making music. And the two things are codependent. If we were just in the fun thing of playing music in our living rooms, that’s a different thing. But we have a community that relies on it, we have employees on the road, we have accountants: people who rely on us for a portion of their income. This is not something that you can just pick up one minute and drop the next.

And also, we have a fan community that we’ve nurtured for 50 years. The band as an entity has been an entity for 50 years. So all of that wasn’t being particularly paid attention to by the people that left.

But it’s all worked out now. Martin Turner was the main protagonist [sic]. He’s now back out on the road after a long hiatus, and he’s billing himself – appropriately – as an ex-member of the band. And that’s absolutely fine by me.

Wishbone Ash’s 1996 album Illuminations was far ahead of the curve in terms of crowdfunding. With the general demise of what we used to call the “record industry,” do you think that crowdfunding overall is a good approach for today’s artists? And is it something that you’ve considered using again or might use in the future?

If the band has a community that understands what they’re doing, yeah, I think it can be good. I think a band like us could easily do it again. We have a very well-nurtured, well-defined fan community. It’s a great value to us that we have that.

But I think that when you may have a cynical approach … if a band gets to thinking they might be able to fund $100,000 or something and put an album out with no community and no feeling behind it, I think that can be a bad move. But if a band has bona fide intentions, it’s good.

Other than yourself, two of the three members of Wishbone Ash have been with you for a very, very long time now. After many years during which the band line up did change often, what does it bring to the band to have this sort of consistency?

Well, firstly, we’re all British. So culturally you don’t have to do any explaining. We’re all collectively tuned into the same things, we listen to similar music, we eat the same food, we tell the same jokes. All of that helps a lot, because perhaps the biggest problem of being in a band is not finding musical similarities with your partners but living together. You’re traveling in very close proximity in a series of very confined spaces, so you better be able to get on well. That’s a big factor.

So, yeah, Rob Skeat and Joe Crabtree have been in the band a long time, and we don’t have to do any explaining, we each get it. Our newer member is Mark Abrahams, has been in the band for three years, but we’ve known him in excess of a decade or two. We didn’t realize what a great guitar player he was and that he actually could fulfill the role that he takes up now in the band. So that’s been a nice fit. All in all, it’s all pretty hunky-dory, I’d say. 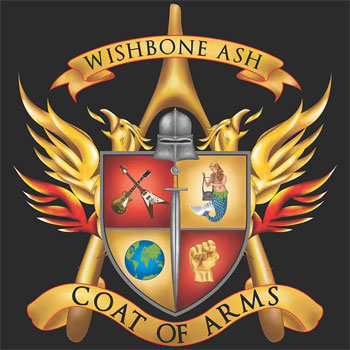 Because you’ve always had the two lead guitarists, I’ve wondered abut this. In some bands, you could almost feel sort of a tension, if you will. There was that very, very brief period where Jimmy Page and Jeff Beck played co-lead guitar in the Yardbirds. But it was better on paper, I think, than it was in reality. Wishbone Ash has always put a premium on melody, and I think that’s part of why it works so well. But across the years, has it ever been a problem to sort of find space within the songs for both guitarists?

Yeah, from time to time there’s been tensions, you know. There have been nine different guitar players to this band, and by nature, guitar players thrust themselves toward the front, like the two guys that you mentioned, Page and Beck. I think that [for] the members of Wishbone Ash, our primary interest is being in a band that plays together and creates nice music with plenty of space for virtuosity, if you want to call it that, or sections that you just let rip with solos.

I would say if you’re asking me in the history of the band whether there’s been tensions, perhaps the most competitive guitar player I’ve ever worked with was Laurie Wisefield. And perhaps he and I competed more so, but in a good way. I think we were expanding the sound of the band and opening things up, and a lot of dynamic tension came out of that. It was quite productive, quite creative.

Overall, I think everybody’s that’s been in the band gets what we’re about. We’re a combo, in the simplest way of thinking; we combine together to make nice music. We’re not really about smashing and nailing people to the wall with crazy guitar solos. That’s other people. There are plenty of guitar players – rock and blues players – who never stop playing; they drill a hole in you. We’re not about that. We quite enjoy backing each other up. Sometimes it’s good to just shut the fuck up and let the other guy play. That’s important whether it’s a drum or a bass or anything; that’s part of what being in good band is all about, and none of us have any problems in that way. We’re not struggling to get our musical voices heard, you know? It’s not a problem.

Way back in 1969-70, if someone had suggested to you that you’d still be playing guitar in Wishbone Ash a half-century later, what might you have said or thought at the time?

I wouldn’t have believed that in the slightest; no way. All of us thought that rock music would have perhaps died out.

After all these years, what keeps it fulfilling and interesting for you?

Travel. I love travel. And like I said earlier, I love the fan community that we’ve created. I’m very proud of that. Working in music is just the best thing ever.