Wishbone Ash: 50 Years On, Drawing Inspiration from Their Own Classic Era

In the early 1970s, British rock band Wishbone Ash helped usher in the era of twin-lead-guitar groups, a powerful and effective approach that influenced many of rock’s most beloved bands, from Thin Lizzy to Boston to Iron Maiden and beyond. Led by guitarist, singer and songwriter Andy Powell, Wishbone Ash landed ten albums on the Billboard charts; they fared even better in the UK, where they earned a Gold and Silver certificate for (respectively) 1972’s Argus and the 1974 LP There’s the Rub. As the 50th anniversary of the band’s self-titled debut approaches, Powell still leads the enduring popular quartet; they’re currently on tour in the U.S. in support of Coat of Arms, Wishbone Ash’s 26th studio album.

Powell reflects on the influence of the harmonic lead guitar style that long ago became Wishbone Ash’s signature. “It’s not just twin lead guitars,” he says. “We’re bringing the bass in there, so we’re often creating three melodic lines on a piece or section of a song. The bass is moving against the guitars, and the effect of that is to give the band a very melodic sound.” 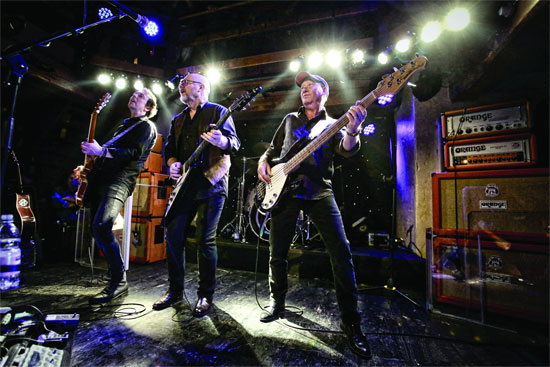 He agrees that that musical strategy – one used earlier by the Yardbirds with Jimmy Page and Jeff Beck – has been very influential in rock. But Powell points out that there’s something uniquely indigenous to the way his band does it. “Our approach is a little bit more English in roots – perhaps more Celtic, a little bit more folk – as opposed to blues,” he suggests.

But looking back across Wishbone Ash’s long history, there have been times when the group has strayed from its melodic hard rock direction. “You can’t have a career without high points and low points,” Powell points out. “When we were perhaps a bit mellower in the middle ’70s, I think it was an attempt to re-group; after being tools of the record labels for a long time, we just tried to make music on our own terms.” Those records haven’t worn very well, but a live album, 1973’s Live Dates is perhaps the best document of the band’s onstage musical firepower.

In any event, by the 1990s, Wishbone Ash had found its footing again, Powell says. “We got back into our stride and produced a great Celtic rock album, Illuminations.” Unfortunately, as he readily admits, “it sunk without a trace.” But the band was ahead of the curve in an important way: Illuminations was fan-financed, more than a decade before the crowdfunding model became a viable option for recording artists.

In the late ’90s, Wishbone Ash pursued what in retrospect looks like another musical tangent: electronica. “It was a reactionary thing,” Powell says of Trance Visionary and Psychic Terrorism, a pair of dance-oriented LPs. “There were all these dances going on. The Chemical Brothers were out there. And I thought, ‘You know what? We could do this; it’s a piece of cake!’” Today Powell considers those albums “a tongue-in-cheek, fun thing.”

As the 21st century dawned, though, all of that was left in the past for Wishbone Ash. “Whether we’ll go off like that again, I don’t know,” Powell says with a laugh. “But we’re very firmly planted in our ’70s-inspired roots now.” The soaring, tuneful twin guitar leads that characterized popular album tracks like “Time Was” from Argus and There’s The Rub‘s “Persephone” are all over recent Wishbone Ash songs like “We Stand as One” and “Back in the Day,” the first two singles from the band’s brand new record, Coat of Arms.

The qualities that made those early Wishbone Ash LP favorites of rock fans are in ample supply on the new record, yet the music sounds more timeless than nostalgic. “When you’re in a band this many decades, you’re inspired by your own career in some ways,” Powell admits. “We don’t want to be a parody [of ourselves], but we’re mindful that people are aware of a certain sound. At this stage of the game, I know I am what I am; I can’t be anything but.” Yet Powell says that he doesn’t feel constrained by that. “If I want to do something different, I can go off on a tangent. I call it the gift that keeps on giving.”

Check back for bonus material from my conversation with Wishbone Ash’s Andy Powell.