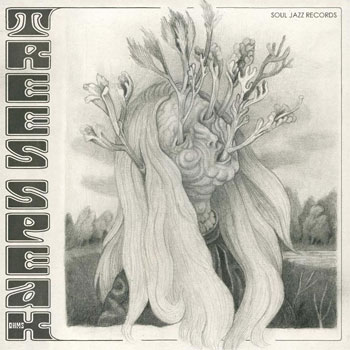 Using the term krautrock is – at least among those who are familiar with the term – a handy shortcut to explaining that the subject matter is minimalist, droning, sometimes static, often electronic-based and generally noncommercial. Strictly speaking, the label is applied to artists or bands coming out of the German electronic music scene of the very late 1960s through the late ’70s.

But in practical use, it’s more widely applied to describe music that fits with the style, even if the artists making it are not from Germany. In this situation, the artist might even be from Tucson, Arizona.

No, really. And Trees Speak – the artistic moniker of Daniel Martin Diaz and Damian Diaz – is just such an entity. Ohms is the duo’s second album, and if (like me) you like bloop-bleep krautrock, you’ll dig this. The 16 instrumental pieces on Ohms wash over the listener is dreamy fashion. The analog sequencer patterns on tracks like “Shadow Circuit” will take that listener on a space rock (well much more space than rock) journey through soothing, hypnotic aural landscapes.

Most of the tracks are brief, but because they run together, they form a seamless whole. Well, not quite seamless: one has to rise out of the reverie induced by the music to flip the LP over and hear the second side. But it’s well worth the trip (so to speak).

“Blame Shifter” sounds a bit like what might’ve been the result of Eno paired with Tangerine Dream instead of Cluster, and if they decided to craft original music after ingesting heavy doses of A Saucerful of Secrets. To the uninitiated – or the listener unfamiliar with the kosmiche and motorik musical values of krautrock – the tunes might not seem to “go” anywhere. But to those who allow themselves to become immersed in the aural world of Trees Speak, there’s a trip of its own kind.

A shoegaze quality pervades the album. Even when the analog textures overload a bit, the woozy, gauzy feel comes through. The glitchy sounds that haunt “Spirit Duplicator” are menacingly unsettling; this is not ambient music. But adventurous listeners will luxuriate in the record. The brief “Nobody Knows” brings forth sounds evoke mallets being tapped on crystal glasses. “Sadness in Wires” has a wobbly underpinning that sounds like what might happen if you had a copy of Another Green World on your turntable, but the center hole was punched off-center.

Often as not, it’s quite difficult to identify the source of the sounds found on Ohms. One might or might not hear guitars. “Sleep Crime” seems to feature squawking, honking, borderline-atonal saxophones. “Out of View” features vibes and Mellotron flute. “Psychic Wounds” has a banjo or dulcimer. “Knowing” sounds almost like a rock band, and it has a musical hook; that’s something that sets it apart from much of what you’ll find on Ohms. And the variety it brings makes the experience of listening all that much more fascinating.

There are no vocals or lyrics to trouble the listener. The rhythm section on cuts like “State of Clear” have a catchy groove, but this is a generally downtempo record designed for contemplative listening, not dancing. The wide-open arid landscape of Arizona might not be the first place you’d think to turn for a helping of pandemic-era krautrock, but here it is. Dim the lights and spend some quality time with Ohms.

The vinyl LP includes a bonus 45 r.p.m. Single that repeats one of the record’s tracks (“With Wound”) and adds one new piece (“Invisible Sine Wave”).