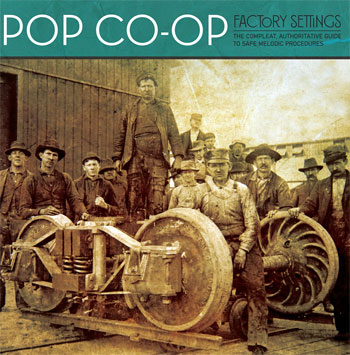 It was more than a decade ago when the Spongetones released what would turn out to be their final album, Scrambled Eggs. The group went out (recording-wise) on a high note, with a collection of songs that stood nicely against a backdrop of great albums going all the way back to 1982’s Beat Music. But for ardent fans of the group’s body of work – both Beatles-styled songs and tracks that reached farther afield for their influences – there would be a sense of loss when it became clear that the Charlotte, North Carolina band wasn’t likely to convene in a recording studio again.

Happily, Jamie Hoover and Steve Stoeckel continued as a recording duo, Jamie and Steve. Their debut album English Afterthoughts was released around the same time as Scrambled Eggs, and it contained much of what made the Spongetones special. The duo would go on to release four EPs; 2017’s Sub Textural is the most recent.

None of which is to suggest that the members of the Spongetones haven’t remained busy; Stoeckel, in particular has immersed himself into another collaborative project, Pop Co-op. Taking full advantage of the 21st century paradigm whereby musicians can record “together” without being in the same room, he teamed up with like-minded creatives, each of whom is located far away from his home base in Charlotte.

Stoeckel plays guitar, bass and keys; Bruce Gordon plays guitar and keyboards in Los Angeles. Stacy Carson (from near Orlando, Florida) on drums and Joel Tinnel (Manassas, Virginia) on guitar round out the quartet. And like they used to say in the ’60s, “all four boys sing.” The group’s debut recording was 2017’s Four State Solution. Inside the package (cleverly adorned with faux-Russian Realist artwork) were a dozen songs, variously composed by one, two, three and sometimes even four of the musicians; Four State Solution truly exemplified the collaborative approach.

As I noted at the time of its release, that album’s style echoed some of the harder-rocking material of the Spongetones. But it had its own character, a sum-of-the-parts feel that allowed it to stand proudly on its own, not in the shadow of earlier work by its most well-known participant.

Nearly three years later, Pop Co-op returns with a new album, Factory Settings. Listeners who find themselves looking for a tuneful, chiming good time will delight in the album. Stoeckel’s “No Man’s Land” was written and recorded long before the Covid-13 pandemic spread across the globe, but the song’s lyrics can be read to apply to the situation. Happily, from a musical standpoint it’s not at all downbeat: an insistent drum foundation is adorned with lovely vocal harmonies (Stoeckel’s singing lead), and some twin lead guitar during the instrumental break harks back to the classic rockers who used that approach: Boston, Thin Lizzy, Wishbone Ash and the like. The tune rocks, but there’s a reason this group isn’t called Rock Co-op: pop music values lay at the songs’ centers.

With its peppy hand claps, upper-register bass lines and shimmering guitars, “Kissing Katy” would have been right at home on a Spongetones record. But the democratic nature of this collective means that it’s varied in character. Carson’s nervy “Flows of Attraction” sounds like early-mid period XTC with octave-apart unison vocals reminiscent of Squeeze. The song’s middle section stars off subtly and then shifts gears into a wonderfully catchy lead guitar solo. Tinnel’s virtuoso progeny Alex guests on piano for Carson’s “Keen to Be Near You.” Stoeckel turns in a nicely understated vocal. The song’s instrumental backing makes prominent use of a clattering yet simple drum part and lush strings. A brief mandolin (or ukulele?) solo adds even more variety.

It’s back to Merseybeat stylings for the irresistible “Catching Light, a Stoeckel-Carson co-write. It may well be the strongest tune on the record, reminiscent a bit of Oh Yeah! era Spogetones yet never explicitly aping that group’s sound (a quirky bridge helps in that regard; it sounds more like – again – XTC).

One of Factory Settings‘ three group-composed tunes, “Underworld” is a soaring power pop track redolent of the Producers. Its searing lead guitar solo makes the track even more memorable, and the song’s extended outro folds in some vaguely psychedelic elements. “To the Sea” features Stoeckel on lead vocals and ukulele. The atmospheric, contemplative song has a bridge that evokes thoughts of Sgt. Pepper, and the bluesy guitar break is an unexpected musical curve ball.

“Cliff of a Year” is a nicely textured album track that makes good use of vocal crosstalk: the voices head in different yet complementary directions, recombining here and there. The intertwining lines are hypnotic. “King of Weightless” kicks off in a dreamy fashion, but it quickly shifts into something much more complex. Trying to follow the song is a slightly disorienting experience; the tune suggests what happens when progressive rock ideas are put into the pop idiom.

“The Price of Admission” puts Pop Co-op back on more familiar territory. It’s the sound of composer Stoeckel digging into the glam rock of the early ’70s for inspiration. Big, swaggering guitars and carefully-placed “Whoo-hoo!” backing vocal choruses are the order of the day here. Despite its title suggesting otherwise, Stoeckel’s “Persistence of Memory” is a gentle love song, not a tribute to Salvador Dalí. Gentle acoustic guitar picking is joined in the song’s second half by overdubbed vocal harmonies.

The danceworthy “Won’t Be Me” is the outlier on Factory Settings. You’ve heard the melody before – on hundreds of pre-1960 rockers and most of George Thorogood albums – but it’s a fun romp nonetheless. Perhaps it’s best to think of it as the album’s “Ringo spotlight” number. Alex Tinnel’s barroom piano solo gives way to a Chuck Berry-flavored guitar break.

Tinnel and Stoeckel’s “Requiescat” features a sophisticated and atmospheric opening section; as that drifts away, the song heads into waltz mode with a melancholy air. Factory Settings closes with the group-written “Sleeve.” The song takes a moment to find its groove, but once it does, “Sleeve” – the longest track on the record – pulls out all the stops. The arrangement shifts between quiet, contemplative verses and swing-for-the-fences choruses. The orchestration that takes prominence for the track’s second half is superb, with cellos and brass engaging in dialogue with keening lead guitar. It’s a breathtaking manner in which to wrap up a consistently well-crafted album.

Perhaps too eclectic to be labeled powerpop, too sophisticated to qualify as meat ‘n’ potatoes rock’n’roll, in the end, the second album from this far-flung foursome is just what the group’s name says it is: pop. And it’s pop of the very best kind.