Joe Troop has a finely attuned ear. Seven years ago, the Winston-Salem native and former member of bluegrass group Town Mountain discovered the connections between Appalachian folk music and the musical traditions of South America. Enlisting the help of musicians from Argentina and Mexico, Troop embarked upon an exploration of those connections with a new group, Che Apalache. The Bunos Aires group’s latest release, Rearrange My Heart, was produced by acclaimed banjoist and band leader Béla Fleck. 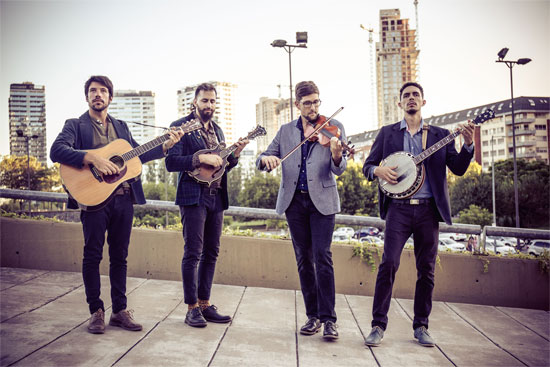 Troop first fell in love with roots music when he was 13. His older brother was then a college student, and the two were on their way to a camping trip. “But on the way, my brother noticed that there was free live music,” he recalls, so they went into a tiny diner in Deep Gap, N.C. “It was Doc Watson and his family!”

That encounter sparked a lifelong passion for traditional music. “At first it was an immediate infatuation with Appalachian music,” he says, but his appreciation soon grew to include all forms of folk music. The accessibility and humility of the folk traditions really appealed to me,” Troop says. “I’ve never really gotten bored of them. They’re all over the world, and they all share something.” He would eventually study music with well-known figures in folk. “I was in Winston-Salem, so I studied with Craig Smith, Jody King, Rex McGee and a whole slew of other amazing musicians.”

Argentina isn’t the likeliest of cities in which to launch a bluegrass band, but for Joe Troop it makes all kinds of sense. “My closest family is in Asheville,” he says. “I’ve spent a lot of time there. I’m a run-of-the-mill North Carolinian guy.” But he’s pursued a worldly perspective on life for many years. “I studied languages, and I’ve lived in Spain and Japan,” he explains. Troop became a permanent resident in Argentina’s capital city a decade ago.

Troop readily admits that there isn’t a large folk/roots music scene in Buenos Aires. But he connected with other musicians who shared his interests. “The guys in my band were my banjo students when we started out,” he says. They started playing together as a group, with a sound that showcased their collective passion for Appalachian folk. Troop was pleasantly surprised to find any interest at all for the kind of music they played. “It’s unprecedented for South Americans to be into this music,” he admits. “We’re kind of a modern concept.” But he emphasizes that North and South American folk musics share a great deal. “There are a lot of shared syncopations, and there’s a West African influence in both traditions,” he says.

That same year, Che Apalache landed an opportunity to bring its sound to North America. I got some grant funding to go on a cultural immersion trip,” Troop says. And it was on that tour when his band mates developed an appreciation for the vibrancy of the folk scene in the U.S. “When we went to Clifftop and [The Fiddlers Convention in] Galax, that’s when it really clicked for them,” Troop says. They really got goosebumps.”

Back in Buenos Aires, Troop did something that demonstrated equal parts commitment and chutzpah. “I was drinking some good whiskey at home one night,” he recalls with a chuckle, “when I read that Béla Fleck was doing a banjo camp in Brevard.” The camp was scheduled during a break in Che Apalache’s tour. “So I straight-up cold emailed him and said, ‘Hey, Béla: you’re my hero. I would really love to come to your camp, but I can’t afford to.’”

Fleck contacted Troop a few months later and invited him to come. “So I said, ‘That’s awesome. And I’d really love to have a band mate come along, too,’” Troop says. Fleck replied: “You know what? Just bring the whole band, whatever.”

“He was into the theoretical concept of a Latin-American based bluegrass band,” Troop says. He and his band mates got on famously with Fleck; eventually the 15-time Grammy Award winner agreed to produce the group’s major-label debut. Rearrange My Heart was recorded in February 2019 and released later that year to favorable reviews.

A year after the sessions with at Fleck’s home studio, Troop remains amazed at the course of events his band has experienced. “It’s kind of hard to believe it actually happened,” he says. “But it did.”