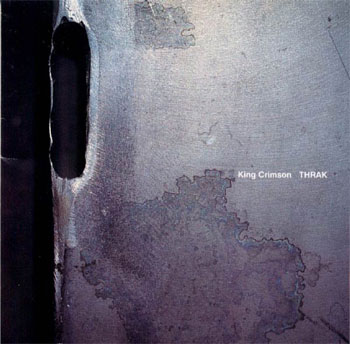 As guitarist and founder Robert Fripp likes to say, King Crimson is less a band and more “a way of doing things.” Throughout its long and storied history, that has meant that the lineups have often changed, and that the group has gone inactive for extended periods, only to resurface without warning.

One such reappearance happened in the middle 1990s, almost exactly a decade after the release of Three of a Perfect Pair, the final word from the ’80s quartet lineup of King Crimson that featured Fripp, guitarist Adrian Belew, bass/Chapman stick player Tony Levin and drummer Bill Bruford. The six tracks on 1994’s VROOOM ran just over 31 minutes total; as such, the release was considered an EP rather than an album-proper.

But as it turned out, the EP was merely a teaser for what was to come. The newest version of King Crimson debuted what would be come to known as the “double trio” configuration: Two guitarists (Fripp and Belew), a pair of stick players (Levin and Trey Gunn) and two drummers (Bruford and Pat Mastelotto). With a sound that followed on as much from the group’s middle 1970s era (proto-prog-metal Red in particular) as it did form the polyrhythmic art rock of ’80s albums like Discipline, this new six-headed Crimson was, as ever, a force to be reckoned with.

Appearing in early 1995, THRAK would be the definitive word from the new lineup. And even though four of its fifteen compositions had appeared on the previous year’s EP, the newly-recorded versions on THRAK are more fully-formed, the result of this potentially unwieldy aggregation finding its (so to speak) groove.

The opening track, “VROOOM” may sound to listeners very much like the title track from 1974’s Red. In fact part of the new track was written for that record. But the new version goes places “Red”did not, showcasing a kind of nuance that the pummeling “Red” intentionally avoided. Belew’s screaming guitar spars sharply with Fripp’s mechanically precise riffage, while the two stick players lay down a thunderous and solid bottom end. Mastelotto and Bruford, both superb percussionists at the top of their respective games, display and understand that not playing is sometime the appropriate response to the music happening around them; as such, long sections of the track feature no drumming at all. But when they do play, they make up for any sonic absence.

The squeals buried in the mix on “Coda: Marine 475” may evoke memories of a time when there was a saxophonist in the band; like modern classical composer Glenn Branca, King Crimson has long been a master of creating ghostly overtones in its music, sounds that are at once there and not there. 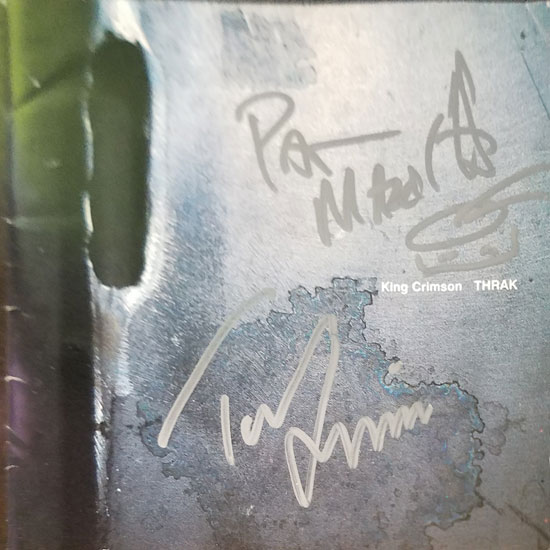 My copy of THRAK, signed by Pat Mastelotto and Tony Levin

The cover art of THRAK strongly suggests an industrial vibe, and much of the music on the album carries that ambiance through, most notably on the noisy, clattering title track. But the eerie, somewhat melancholy textures of Fripp’s Mellotron – a keyboard instrument most closely associated with early ’70s progressive rock – are equally in evidence. Adrian Belew’s skewed pop instinct had added an off-kilter accessibility to the group’s ’80s output, and THRAK cuts like “Dinosaur,” the gentle “Walking on Air” and “Inner Garden I” and the sweet, sultry “One Time” do the same for the mid-’90s group.

“People” veers as close to pop territory as King Crimson has done in its half-century plus as a creative force, but even it exhibits a knotty, otherworldly middle section that suggests Peter Gabriel crossed with Talking Heads. (In tacit acknowledgment of its listener-friendly character, “People” was even issued as a promotional single.)

Mastelotto and Bruford take the opportunity to show exactly what two world-class drummers playing together (as opposed to merely at the same time) can sound like on the appropriately-titled “B’Boom.”

Frippertronics – the tape-loop technique devised in the ’70s by Fripp and pioneering artist Brian Eno – is evoked (if not explicitly used) on “Radio I” and “Radio II.” And listeners who reveled in the angular and playfully sinister textures of 1984’s Beat LP were rewarded with “Sex Sleep Eat Drink Dream,” a sharply dissonant track with reliably quirky lyrics from Belew (who wrote the lion’s share of lyrics on THRAK).

Providing a kind of connective tissue with the EP that preceded it, THRAK concludes with “VROOOM VROOOM,” another thundering instrumental that places all of the album’s assets on brilliant display. It, too, sounds like a cousin to “Red,” as well as to a Fripp solo track, “Breathless,” from his Exposure LP.

On its release, THRAK earned almost universally favorable reviews; it wouldn’t chart in the U.S., but did manage to reach #58 on the UK album charts. It would be another five years before King Crimson released another studio album, 2000’s The ConstruKction of Light. By that time, Levin and Bruford had left the group; the remaining four continued as a quartet. But as time would prove, Fripp and Co. weren’t through with tinkering with the group’s lineup: the current version of King Crimson (2020 edition) counts Levin, two guitarists and three drummers among its ranks. Whether as a band or a way of doing things, King Crimson never fails to be thought-provoking.