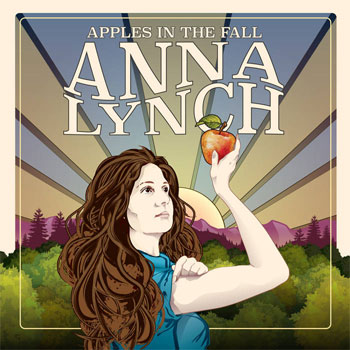 Singer-songwriter Anna Lynch is originally from Sebastopol, California; she led bands in Alaska before settling in Western North Carolina. Her self-titled debut album was released in 2013, and now Lynch has followed up that well-received set with a new five-song EP, Apples in the Fall.

Lynch’s debut from six and a half years ago displayed her chosen method: clear and strong vocals, lyrics that focus on workaday themes likely to resonate with listeners, and an uncluttered approach to instrumental accompaniment that positions voice and words front and center. The distinctively Southern affectation of her vocals seems somewhat out of place in light of her West Coast origins, but it certainly fits with the music and the story-songs they carry.

Apples in the Fall doesn’t represent a dramatic shift in approach from that album; the production values are a bit stronger and more refined, and Lynch’s supple voice seems more relaxed and comfortable. The EP opens with its title track, a gentle, wistful tune with a winning and understated lead guitar solo. That solo – a centerpiece of the song – strikes a balance between slick Nashville countrypolitan and the country-rock texture that characterizes some of the best work by Eagles and Grateful Dead. But the subtle instrumentation – brushed drums, a simple root-note-based bass guitar part – clearly exists primarily to help support Lynch’s voice.

“Hotter Than Hades” presents a loping, lilting classic country arrangement with a trifle more energy than the first song. Pedal steel guitar and organ are almost buried in the mix; their presence is more felt than heard, and that approach is supremely effective in this context. Assured yet unassertive lead guitar figures flit in an out of the arrangement, adding texture but never threatening to get in the way of Lynch’s plaintive, melancholy delivery.

From an instrumental perspective, “Do You Miss Me Yet” applies a set of values similar to those that inform “Hotter Than Hades,” right down to the waltzing beat. But here – and in keeping with the subject matter – Lynch ups the pathos in her delivery. And the song’s fiddle solo gives it a character that sets it apart from the other cuts.

“Bitter Bones” is lyrically wistful, but the music is decidedly more upbeat than what has come before on Apples in the Fall. Like the other songs on the set, it’s a contemplative song that conveys regret and resignation: “This is what I get … but I’d do it again.” The acoustic guitars positively shimmer.

Lynch (or her publicist) labels herself an Americana artist; that terms fits snugly where her debut album is concerned. But much of the Appalachian-style textures that characterized that debut are dialed back on her latest EP in favor of a more sophisticated aesthetic. Still, the new release’s closing track provides a sonic connection to the earlier disc. “Beer in Jars” features plucky clawhammer banjo, fiddle and a comparatively spirited vocal turn from Lynch. Easily the most upbeat track on what’s essentially a weeper of an EP, “Beer in Jars” strikes a sunnier tone. It’s easy to imagine a (seated) audience clapping along in time, and sawing gently in their seats as the song is performed.