What Was ‘Losst’ is Now ‘Founnd’: A New Harry Nilsson Album (Part 3)

Harry Nilsson always had definite ideas about how his songs should sound. Even a listen to the piano-and-vocal demo recording of “Without You” from 1971 shows that from the start, he knew where he wanted to take the song’s arrangement. And for the posthumous Losst and Founnd project, efforts were taken to remain true to Harry Nilsson’s original vision. “I planned on making this record as if Harry were still here,” Hudson says. “He would say, ‘We’ve got to get Van Dyke to come down and play accordion on this song,’” Hudson recalls. That didn’t happen while Harry was alive, but once the project was revived, Parks eagerly showed up. Along with sympathetic playing by Keltner, Cox, Kiefo Nilsson and others, Parks’ sprightly accordion on Nilsson’s “Woman Oh Woman” would allow Hudson to place the original tape’s somewhat monotonous string-synth part deeper in the mix.

Making good use of oft-maligned (and oft-abused) AutoTune technology, Hudson “corrected” some of Nilsson’s shakier vocal parts. Though he came up with it in reference to Three Dog Night’s version of his “One,” Nilsson coined a neologism for out-of-tune vocals. “Flarp,” explains Hudson. “In between sharp and flat. Because that’s how Harry’s mind worked!”

While making it clear that he had no part in production decisions, in a November post on Facebook, Kiefo Nilsson made a case for using the controversial AutoTune on his father’s final recordings. “I don’t think it was wrong, really,” he wrote. “I know my dad loved technology and likely would have been entirely okay with tuning for the sheer technical wizardry of it.” He also made the point that the use of AutoTune ultimately “does help the finished product be more cohesive.”

In 2013 when Breaking Bad featured Badfinger’s “Baby Blue” in its final scene, it led to a resurgence in the popularity of that long-defunct group. Coupled with the use of “Gotta Get Up” (from 1971’s Nilsson Schmilsson) on Russian Doll, it’s possible that the release of Losst and Founnd will help spark renewed interest in Harry Nilsson’s body of work as well. 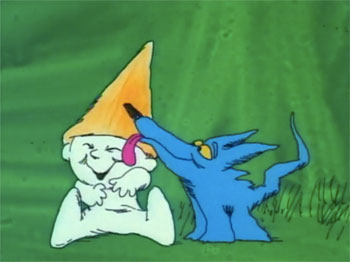 An upcoming digital release of Nilsson’s animated film The Point may help in that regard as well. Featuring narration by Ringo Starr and songs by Nilsson, the popular cartoon fable is set for its first high-definition release in February 2020. An interview with Kiefo Nilsson is one of several bonus features to be included on the Blu-Ray release.

For the last few years, Kiefo has been leading a collective of musicians in live performances of the music from his father’s The Point. With dates on the West coast, Kiefo leads a complete reading of the 1970 album, with excerpts of the animated story including narration. Transcribing the material and putting the concerts together has given Kiefo a better understanding of some of the qualities that make his father’s music special and timeless. “The harmonic content of The Point is very minimal,” he observes. “It’s simple harmony. The melodies carry over because they’re all very strong and memorable.” He says that his father’s “ear was so keen on melody.” And that quality carries through all of Harry Nilsson’s work, from his earliest recordings through to the ones he was working on at the very end.

Mark Hudson is clearly pleased to bring the long-shelved Losst and Founnd project to completion. The low-budget circumstances that characterized the original sessions continued right through to present day, but they didn’t keep the results from being of considerable quality. “I couldn’t pay [the musicians] the money that they’re used to getting,” Hudson admits. “And they didn’t care. That’s what they wanted to do. Harry was a man who they loved, a man that they respected. And I think this was sort of their goodbye to him as well.”

Hudson says that “Harry’s music is still played everywhere, because it’s romantic, it’s theatrical, it’s melodic … and most of all, it’s the truth.” And Hudson has fond memories of his friend. “That’s the true legacy. Forgetting all of the antics – which we were all guilty of, from the drinking and the drugs and the attitude – when he said, ‘I love you,’ you felt it. When he hugged you, he would hug you forever. And I knew him like that: a great dad, a loving husband, a good friend. You can’t ask for more.”

Listening to Losst and Founnd today, it doesn’t sound like an addendum. Instead it feels – and sounds – very much a part of Harry Nilsson’s body of work. And the album’s title feels appropriate to producer Mark Hudson. “It’s sort of autobiographic,” Hudson says. “Harry was lost. And now he’s found, and he’s making a record.”