What Was ‘Losst’ is Now ‘Founnd’: A New Harry Nilsson Album (Part 1) 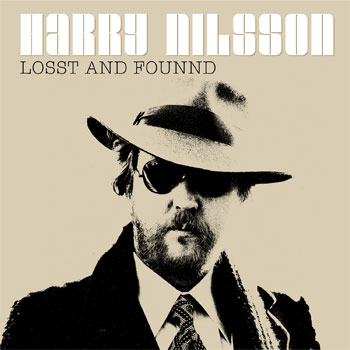 Featuring an idiosyncratically spelled title that evokes memories of his 1977 LP Knnillssonn, singer and songwriter Harry Nilsson has returned with Losst and Founnd, his first album of new music in 40 years. That’s an amazing feat for a man who passed away in 1994, but it’s in keeping with his unpredictable nature.

Harry Nilsson had a curious career. He got his start as a songwriter, and went on to write songs that would become hits for the Monkees (“Cuddly Toy”) and Three Dog Night (“One”). Other Nilsson songs were recorded by a diverse list of artists that includes Glen Campbell, Blood Sweat & Tears, Ella Fitzgerald, Aimee Mann, the Walkmen, Jellyfish and many others.

But he’s perhaps best known as a singer: a tenor with a three-and-a-half octave range, Nilsson applied his considerable talents to songs written by others. His cover of Badfinger’s “Without You” was a worldwide smash, and his reading of Fred Neil’s “Everybody’s Talkin’” was immortalized in the 1969 film Midnight Cowboy. A generation grew up hearing him sing “Best Friend,” the theme song from the TV series The Courtship of Eddie’s Father.

The restlessly creative Nilsson also had a modest acting career, and his children’s fable The Point! was a highly successful animated feature. He had a starring role in 1974’s Son of Dracula (a film produced by costar and close friend Ringo Starr); the movie may have been a commercial and critical disaster, but by all accounts everyone involved had great fun. Unfortunately, the making of Son of Dracula fit in with Nilsson’s growing reputation for overindulgence. His vocal cords hemorrhaged during the making of his 1974 LP Pussy Cats (produced by his pal John Lennon); it would take years for Nilsson’s voice to recover fully. By the time he died of a heart attack in 1994 at the age of 52, many of Harry Nilsson’s achievements had faded from the public’s consciousness; too often he would be recalled chiefly not as a composer, singer and musician but merely as one of the “Hollywood Vampires,” as a carousing comrade of John Lennon during the former Beatle’s infamous “lost weekend” in L.A.

It’s often forgotten now, but Nilsson did have significant hits with his own compositions. “I Guess the Lord Must Be in New York City,” “Me and My Arrow,” “Coconut,” “Jump Into the Fire,” “Spaceman” and “Daybreak” all made it to the Top 40 in the U.S., and Nilsson earned chart success in Canada, the UK and Australia as well. But he would perform live only on rare occasions, and after a 1980 release (Flash Harry), Nilsson was without a recording contract and stopped making albums. Save for work on the soundtrack of Robert Altman’s 1980 film Popeye and some compilation and reissue projects, it appeared that Flash Harry would be the final musical word from Nilsson.

Or so the wider public might have thought. As early as 1986, Nilsson was working with producer Mark Hudson on demos for a planned “comeback.” With virtually no funds and no record deal, the two began work on a collection of new songs. “When we started doing it, it was in so many different forms,” Hudson recalls. “There was some stuff caught on my Tascam four-track.” As work progressed, they took a catch-as-catch-can approach to recording, working at whatever studios they could afford.

Hudson recalls traveling with Nilsson in the late ’80s to see Warner Brothers executives. They brought along a tape of three or four demo recordings in hope of getting a deal. “We took a meeting with Lenny Waronker [and other execs], and they ended up looking at us like the RCA dog with their heads tilted,” he says with a rueful laugh. “Well, Harry,” Hudson recalls Waronker saying, “you know, music is changing.” He says that Nilsson got up from his chair. “With a few F-words, he walked out. And I thought, ‘Oh, God, there goes that.’ We were trying to get a record deal, but we couldn’t. And we didn’t.”

But work on the recordings continued. “We just kept working,” Hudson says. “Because after the Warner Brothers meeting, it became a fire under Harry’s ass: ‘I’ll show those bastards!’” Recorded in Chicago and elsewhere, those sessions would continue right until days before Nilsson’s death on January 15, 1994. Bootlegged tapes of nine songs from the sessions (dubbed Papa’s Got a Brown New Robe) eventually found their way into the hands of hardcore Nilsson fans.

But the recordings Nilsson and Hudson made weren’t meant for release in their original form. Owing to lack of funds, the two often used a drum machine instead of real percussion, and keyboard synthesizers stood in for Nilsson’s grand arrangement ideas. “I don’t like synthesizers,” says Hudson. But they had no choice. The multi-instrumentalist producer also played bass guitar on several of the tracks. The sessions did yield all of Nilsson’s lead vocal parts and some of the harmony vocals. Harry’s voice was still a bit wobbly and rough in places, but his songwriting muse remained intact.