In the era before rock ‘n’ roll, pop music was for adults. And while adult pop continued as a force through the ’60s – witness the careers of Tom Jones, Johnny Mathis and Engelbert Humperdinck as well as Frank Sinatra’s continued run of top 40 hit singles – the category was largely moribund by the 1980s. But modern culture’s welcome rediscovery of things of value that have come and gone – be it cocktails, clothing styles or music – has spurred the careers of some modern-day adult pop artists. Kat Edmonson is one, and it help to a great extent that she’s very,very good at what she does. 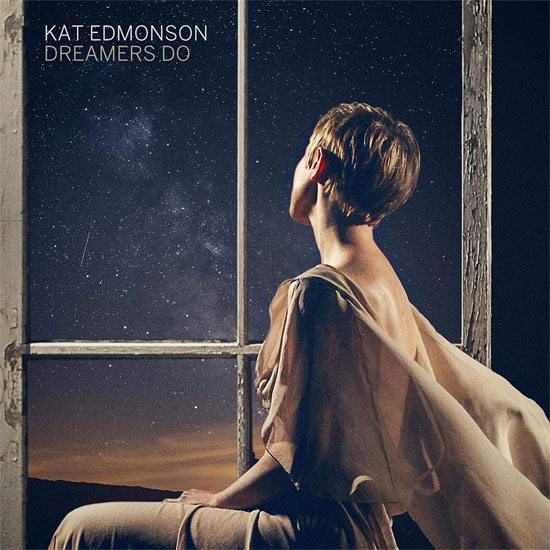 The Houston-born jazz singer, songwriter and producer – who prefers the term “vintage pop” to describe what she does – broke out on the national scene in 2009 with her debut album, Take to the Sky. She found immediate success, with the album reaching #20 on Billboard‘s jazz album chart. Her voice is a deft synthesis of chirpy yet highly versatile and expressive textures, and Edmonson knows her way around a pop arrangement.

“Quite often, the arrangements are being written while I write the entire song,” Edmonson explains. “I write most of my music in my head, and I often hear the music almost like a full recording, to begin with.” She says that the orchestral lines she hears in her head often dictate the character of the finished recordings.

Way Down Low from 2012 saw Edmonson’s profile continue to rise. Around that time she also collaborated with Lyle Lovett, appearing on two of her fellow Texan’s albums, the holiday-themed Songs for the Season (with a cover of “Baby, It’s Cold Outside”) and Release Me.

2014’s The Big Picture was an even bigger success, debuting at the top spot on Billboard‘s Heatseekers chart; a subsequent appearance on CBS This Morning brought that program its highest viewership in nearly a decade. With great success has come larger concert venues. But scaling up hasn’t posed a problem for Edmonson. “As the rooms get bigger, I tend to get a little more demonstrative,” she says with a warm laugh.

As she developed her skills, Edmonson took on as greater role in the production side of her music. She co-produced her second album, 2012’s Way Down Low, and though other producers (including Mitchell Froom and Kevin Lovejoy) were nominally in charge of production on some of her releases, Edmonson would be credited as producer for 2018’s Old Fashioned Gal. “I’m always very hands-on in bringing forward my ideas from the beginning,” she says. “I just can’t help but always have ideas in whatever I’m working on.”

And though she doesn’t shy away from modern production techniques, Edmonson has found that – sometimes, at least – the old ways work best. “It’s much more common now that instruments are recorded individually and layered on top of one another to create a track, “she admits. “But the classic way of recording was [to have] people in a room together.” One her own recordings, she has employed both approaches.

After the success of Old Fashioned Gal – an album that, despite its title, effectively bridged the gap between tradition and modernity – it was fair to wonder what direction Edmonson would pursue on her next project. “I’m actually wondering that myself,” she told me in late 2018. “I’ve got another project underway, and I’m still waiting for it to reveal itself. I’m not committed to any particular idea yet.” She noted that she views each album project as “a step forward in discovering more about myself and things that I’m working out on a personal level [and] in my career.”

Released in February 2020, Dreamers Do reveals the nature of that simmering project. Alongside a pair of Edmonson originals (“Someone’s in the House” and “Too Late to Dream”) are a clutch of songs drawn from classic-era Walt Disney films like Cinderella, Peter Pan and Mary Poppins. The subtly conceptual Dreamers Do also features a pair of standards, “What a Wonderful World” and Singin’ in the Rain‘s “All I Do is Dream of You.” Two decades into the 21st century and thanks in no small part to the creativity of Kat Edmonson, adult pop seems to have regained its foothold.