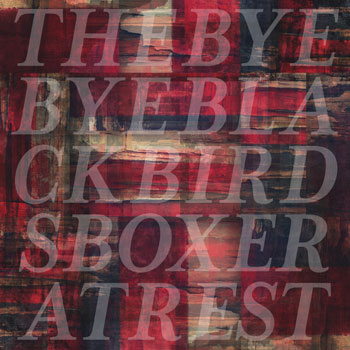 It’s been nearly three years since the release of The Bye Bye Blackbirds’ previous album, Take Out the Poison (see below for a link to my review of that record). The reasons for that extended quiet period have much to do with the tone of the new record. Guitarist Lenny Gill experienced serious health problems, necessitating a heart transplant and an extended recovery period. Happily, he did recover – and regain his ability to play his instrument – and what awaited him upon recovery was a nearly-finished record that only needed his input.

Though Boxer at Rest was completed some months ago, at the time of this writing – mid-March, 2020 as quarantines have begun across the United States – the album’s themes have become even more timely. Tragedy, uncertainty, conflict and loss have long provided fodder for creative expression. But with some notable exceptions – Badfinger first and foremost among them – artists working within the powerpop idiom have rarely taken advantage of those sources of inspiration, preferring instead to focus upon sunnier – or shallower – themes.

The Bye Bye Blackbirds have always been special; listeners could cont on the group to color outside the lines, to resist being pigeonholed into someone else’s idea of what is and is not acceptable. And on Boxer at Rest, the group continues its mission. The disc’s opening track, “You Were All Light” deals in regret and optimism, and as it heads to its conclusion, the tune makes excellent use of a horn section. Said instrumental break is comparatively brief, but in its few seconds it puts the lie to the idea that horns are out of place in a rock ‘n’ roll tune (see also: Badfinger’s Wish You Were Here LP).

The technique of back-loading songs with their most memorable hooks is a curious one, but it serves to reward those who stick around. “How Do We Stay” is splendid enough a song as it goes, but the catchy repeating guitar melody that concludes the tune may be what sticks in listeners’ minds the longest.

“So True” serves up some rich vocal harmonies, courtesy of songwriter and lead vocalist Bradley Skaught, ably joined by Kelly Atkins. The uncluttered, straightforward production vibe strikes a perfect balance: no frills but just the right amount of professional polish.

“Baby It’s Still You” showcases a kind of country-flavored rock feel that reminds this listener a bit of Moby Grape. Some subtle chord shading adds a layer of sophistication, and –yet again – some tasty and deftly-placed breaks from the three-man horn auxiliary add that special something. The guitar solo is as clean and memorable as it is brief; Skaught and his band mates – Gill, Atkins, Aaron Rubin, Joe Becker and KC Bowman – understand the pop value of “leave them wanting more.” But they also make sure to deliver the goods.

Skaught takes a solo turn on the melancholy, achingly beautiful “Words & Signs.” The arrangement features only his voice and acoustic guitar, and it has a feel very much like Big Star’s “Watch the Sunrise.”

The breathtaking vocal harmonies of the LP’s second-side opener “Watch Them Chime” are a thing of beauty. And the tune speaks of optimism in the face of some unspoken difficulty. It’s difficult at this moment to think far ahead into the future, but “Watch Them Chime” could serve as an anthem for the post COVID-19 era that – we must believe – lies somewhere ahead.

The bouncy character of “War is Still Hell” stands in sharp contrast to its subject matter. But the tune’s lyrics are about healing and regaining of wholeness, balancing the sentiment expressed in another line of the song: “We can’t fall much farther / can we, baby?”

That same sense of indefatigable optimism shines through “If it Gets Light.” The insistent, uncharacteristically lengthy rocker succeeds musically, especially with its extended instrumental breaks. But its strongest element lies in its final words: “Hey if it gets light, then it gets light / Let’s see how the day comes.” It’s an acknowledgment that sometimes we have to take what comes and make the best of it. The manner in which the band lets loose suggests release, and celebration of that release.

But it’s optimism and heartfelt affection that provide Boxer at Rest with its most prominent characteristics. The record closes with “All Our Friends,” a tune that seems subtly influenced by the lyrics of the Kinks’ “Days” and Big Star’s “Thank You Friends.” Musically, it’s something else entirely, with some lovely interplay – multiple guitars, multiple voices – and serves as a strong closer for what may well be the Bye Bye Blackbirds’ finest recorded outing to date.

Boxer at Rest is scheduled for release on April 24, 2020. The track “Baby It’s Still You” can be streamed at the group’s Bandcamp page, where you can also pre-order digital, CD and vinyl versions of the album. And it’s the vinyl LP sleeve that best showcases the wonderful cover art; in this era of albums often taking non-physical forms, it’s a delight to encounter a release with such high production values applied to its packaging. Come for the music, stay for the album art.