Marinho’s Emotional Openness is on Display on ’tilde’ (Part Two)

Even with herds of creative artists endeavoring to make music, those cities have at least some sort of infrastructure for all of it. “Whereas in Portugal, sometimes it can be a little bit stressful,” she says. “You know you have the talent and you know that people are going to enjoy your music, but you also know that there’s not a lot of money going around to support your growth as an artist.”

She’s not complaining, though. For her part, Pipa Marinho has plans beyond local performances in support of her debut album. If the many details can be sorted out, there are hopes for a North American tour. And in the meantime, she’s putting together a radio show designed specifically to celebrate women songwriters. 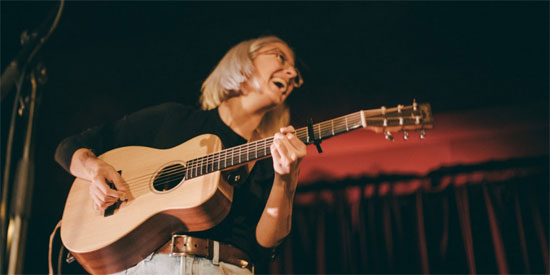 And over the last few years, Marinho has been building a solid base of fans in Portugal. But she points out that her home country’s music scene exists as a sort of two-tier system. She mentions ZDB, a Lisbon club where she has performed a number of times (the venue is also a favorite of American singer-songwriter Angel Olsen).

“What happens in Portugal is that there’s not a lot of mid-tier level [music] industry,” she says. “Either you’re small, indie and niche and you play a venue like ZDB, which is cool. Or you’re extra big and you play a coliseum for 4,000 people.” Making clear that she’s exaggerating to make a larger point, she emphasizes, “There are a few in the middle, but not a lot.”

And what thrilled her about Los Angeles was a thriving middle tier. “What inspired me there was to see so many artists that are unknown to almost everyone in Europe, but they make a living out of playing,” she says. “They’re making ends meet, and even more than that.”

With her background in the business side of music, Marinho understands more than most about what it takes to succeed. Talent – a quality she has in ample supply – can only get an artist so far. The shifting industry paradigm that came with the demise of major labels (and their big budgets) can work in favor of an independent-minded artist like Marinho.

“Back in the ‘80s and ‘90s, it wasn’t [always] good for the artist,” she observes. “Because they handed everything over to the labels and to the companies. I think it’s good that the artists are more hands-on now.” Her method of working with Street Mission Records is much more collaborative, she says. “And I like that. I like that we’re doing this together and it’s not like, ‘You make me big.’ Dani’s not saying, ‘You work on your followers, and I’ll collect the money.’ I’ve been lucky that way.”

Ultimately, though, Pipa Marinho’s success comes from more than mere luck. She engages with those who appreciate her music, but in a way that places value on being genuine. “I just try to be myself,” she says. “Speaking of social media, for example, I try not to post anything just for the sake of posting.” If she feels she has something relevant to say, however, she’ll share it.

“And I try to make it as honest and as transparent as I can,” she says, providing an example. “When I post about a new single, I’m probably going to talk about what kind of emotions I’m feeling about posting about that. And what kind of feelings originated when making that song.” She has learned that her followers appreciate that approach.

“Every time that I get a comment or a message from someone, it’s usually something very emotional, something [along] the lines of, ‘Thank you for talking about these things in ways that I feel the same,’” she says. That kind of emotional connecting is doubly important for an artist who makes what she calls “emotional folk” music. “I don’t think there’s any other way of promoting yourself or of communicating with others,” she says. “And that’s how I think you should cultivate a following: aim to have a sense of community and a sense of belonging with the people that follow you, and don’t aim to have a lot more followers.”

That sense of connectedness feeds Marinho as an artist, too. “Even just to have someone listen to my music or be at my shows is a very big validation,” she says. “And I don’t mean validation in terms of ‘You’ve made it because someone cares about your music.’ My music is very vulnerable, and when I’m on stage, singing those lyrics, and even just playing those guitar riffs, people are there. They’re there because they’re listening to me. And they’re there because they want to be there. For me that’s the same as them saying, ‘I see you. I hear you. I’m here.’”

And it’s not necessary that her audience experiences the exact same set of emotions at the same time. “For myself – and, from what I understand, for a lot of artists – a lot of the need to make art also comes from an emotional difficulty, or trauma, or whatever you want to call it,” she says. “Of not having felt seen and heard before. Sometimes you have to write it; you have to externalize it that way, because you didn’t feel like you had [another way to] share it.”

At their core, the eight songs on Marinho’s tilde are about the sharing of those emotions. “The lack of human connection is what sometimes gave me the spark to write the songs,” she says. “The songs were a tool for me to get that human connection, which I am getting in different ways. And I’m very happy about that.”

A few weeks before our meeting, Marinho took the stage at the aforementioned ZDB. Her performance of “Joni” – a song on tilde that’s a tribute to Joni Mitchell – was captured with professional video equipment. The ZDB clip illustrates the ease with which the artist combines folk-based songwriting with a solid indie rock sensibility; the music – even when it’s gentle – has teeth.

Also on YouTube, viewers can enjoy a series of Marinho’s entrancing music videos. “I Give Up and It’s OK,” “Ghost Notes” and “Window Pain” all explore fertile emotional territory within the context of catchy folk-rock arrangements. Even when the themes are weighty, they’re delivered in a way that makes them accessible. “I wrote ‘Freckles’ after I started therapy,” Pipa says. “It’s a lot more raw [than many of the other tracks], and it comes from a place of disappointment. But it’s also beautiful because of that. It’s my favorite track on the record. And I think it’s the most vulnerable one, as well.”