Eric Gales: (More) Beyond the Blues

To listeners who have followed his work over the last new decades, it may appear that guitarist Eric Gales has evolved his technique. While quite good for what they are, the pair of albums he released in 2006-7, Crystal Vision and The Psychedelic Underground are characterized by what detractors might call overplaying. “My approach has changed,” Gales admits. But he goes on to explain the reasons behind the change.

“I was on a guitar-oriented label,” he says, “and I was produced by a predominantly guitar-infatuated producer. In my opinion, I wouldn’t have played as much guitar as I did.” But he remains proud of those releases. “I’ve just got a more reserved approach – lay back and play smooth – about things now.” 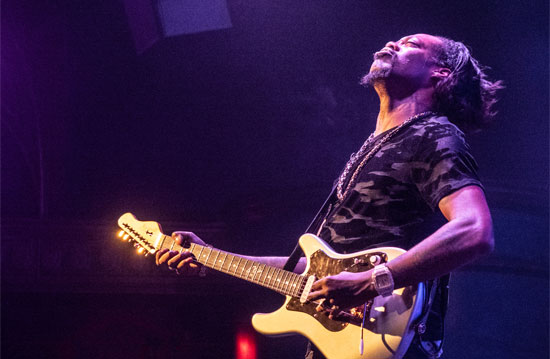 Looking back on his career in music so far – nearly 30 years making albums, and a decade of playing before that – Gales says that he believes he came into his own with a signature style “around 2000, with the That’s What I Am record. But it [happened] in phases,” he says. Gales pinpoints four subsequent albums that for him represent steps forward as a musician: 2010’s Relentless, Good for Something from 2015, Middle of the Road in 2017 and his most recent release.

“I believe it happened again with The Bookends,” he says. Released in February 2019, The Bookends may be Gales’ most varied outing to date. There’s plenty of fiery, blistering guitar work, but the 45 year old musician seems more comfortable with his abilities, and more focused on song craft that balances the instrumental cutting.

On The Bookends, Gales also focuses on his singing more than he has in the past. “I was surrounded by some very inspirational artists who helped channel that through me,” he says. He credits three individuals: his wife, producer Matt Wallace and Beth Hart, who duets with Gales on The Bookends‘ standout track, a cover of the Beatles’ “With a Little Help From My Friends” by way of Joe Cocker’s arrangement.

“I think it’s been established that I think I can play guitar a little bit,” he says with a smile. “I didn’t want to negate the guitar, but I did want to put a little bit more emphasis on vocal performances.”

Gales wants the world to know that there’s more to him than what can fit neatly into the “blues guitarist” category. He says that the music he makes today is part of “a larger plan to try to saturate this world with all of the things that I feel, that are in my head and that inspire me.” And he teases that his next album might just expand his musical vision in wider directions.

Because Gales first established himself within the blues idiom, there’s an inevitable segment of his fan base that expects him to stay inside that box. But some of the tracks on The Bookends leave the blues completely behind. The guitarist isn’t overly concerned about alienating his followers, though. “My fans who know me know to expect the unexpected from me,” he says with a chuckle.

“I’m inspired and influenced by so many different things; The Bookends is just a summary of that,” he explains. “And that was exactly my point. That’s why I called it The Bookends. I’ve tried to touch on everything that I possibly could in a 10 or 11 song project, but [they’re] still part of one package.”

Another factor that has influenced Eric Gales’ musical journey is his recovery from addiction. He notes that many in music who met untimely ends could be described as tortured souls. “They spent their life doing what they do to make other people happy, but who poured back into them?” He credits having his wife who loves him as a key in his coming back from the edge.

“Having a very clear head has opened up channels that allow for the raw energy to come through me and pour out into the listener,” he says. “And I’m really loving it. I’m never disappointed.” He says that spontaneity is one of the musical results of being clean: “I have no idea what I’m about to do before I do it.”