Down South and Dirty with Dirty Soul Revival

As a style of music, Southern rock is difficult to pin down. Even some of its most dedicated practitioners are at a loss when it comes to defining what exactly constitutes Southern rock. “That’s a good question,” says Abe Anderson of the Dirty Soul Revival. His reply is one commonly used in the interviewing game as a gambit to buy time while struggling to come up with an answer.

After fumbling around valiantly, mentioning blues, country twang and a rock ‘n’ roll beat, Anderson shrugs. “I don’t know,” he admits with a chuckle. “I guess, being from the South and playing rock ‘n’ roll would technically make it Southern rock.” 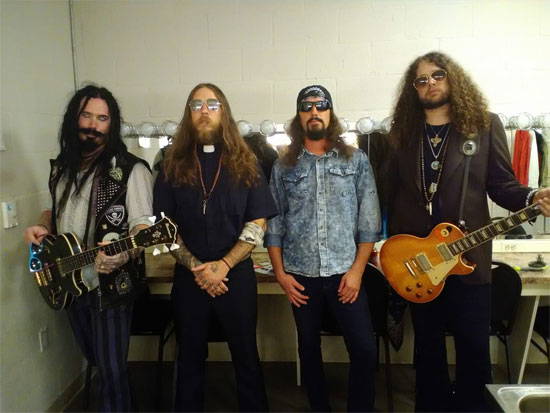 Fair enough. There’s some general agreement that bands like Lynyrd Skynyrd, Outlaws and Black Crowes made music that fits into the category. Other well-known groups — the Allman Brothers Band, for example, who drew from the jazz tradition — don’t fit as neatly into the genre.

But one important hallmark of Southern rock is its lyrical sensibility, one that draws from real life. And that’s an area in which Dirty Soul Revival exemplifies the beloved style of music. Anderson says that his inspiration “always comes from personal experience. That may be tragedy or something sad,” he says, “something that affected you enough — even if you don’t realize it — to start writing about it.”

Anderson says that there’s often no specific intention to his songwriting. “A lot of the time I don’t realize what I’m writing until I’m about three-quarters of the way done with the song,” he admits. “Sometimes I just start writing words that sound interesting to me, and then all of a sudden, I’m like, ‘Oh, okay. That’s what this is about!’”

He has found that writing from the heart can result in a song that speaks to listeners on a personal level. “It’s important for me to write something that connects with the listener,” he says. “But I find that that never happens if it doesn’t connect with me first. If I don’t believe in it, it never comes across right. It sounds contrived; it sounds put on. But if it means something to me, then I can convey that in depth to the listener.”

Anderson sings and plays guitar, backed up by guitarist Brandon Hill, Duste Decay on bass, and drummer Tyler Wedge. Launched in 2014, the group – which originally featured Anderson’s wife Jenni Lynn – grew out of Anderson’s desire to move beyond the blues purist approach of his previous band.

The Dirty Soul Revival released its self-titled EP in 2016, following that up a year later with the full-length Brave New World; Anderson is a prolific songwriter, so there’s plenty more new material to come. “I’ve got at least 20 songs that are done,” he says, “We could go record them tomorrow.” The challenge, he admits, is “finding the time to work it out.” The band maintains a busy calendar of live dates; Dirty Soul Revival has shows booked well into August, including a number of festival appearances.

And as energetic and powerful as the band’s recordings are, being in front of an audience is where the Dirty Soul Revival is most in its element. With that in mind, Anderson says that the band is considering cutting a live album, one that captures the intensity of the group’s stage presence. “We write a fairly broad array of songs,” Anderson says. “We have stuff that’s pretty mild and laid back, some that’s pretty fast and heavy, and we’ve got songs that are a little more groove-oriented.”