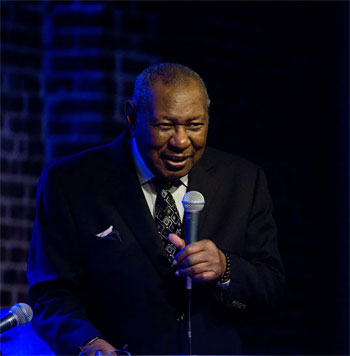 The last name may sound familiar: Pianist and singer Freddy Cole is, in fact, the youngest brother of the late Nat “King” Cole, the jazz musician who scored more than 100 pop hits during his lifetime. But Freddy Cole — immortalized in the award-winning 2006 documentary film The Cole Nobody Knows — is no also-ran. Classically trained on piano, he studied at Juilliard, later earning a master’s degree at the New England Conservatory of Music. Freddy Cole earned his first hit single in 1953 with “Whispering Grass (Don’t Tell the Trees),” showcasing a vocal style that — while having some surface similarities to that of his hugely famous brother — owes as much to the influence of classic pop crooners like Frank Sinatra.

With more than 35 albums to his credit, the prolific Cole has remained an in-demand concert draw worldwide for more than 60 years. His masterful command of the Great American Songbook is on display whenever he appears onstage with his quartet (featuring bassist Elias Bailey, drummer Quentin Baxter and guitarist Randy Napoleon). Remaining vital and active at age 87, Cole is a 2019 Grammy nominee (Best Jazz Vocal Recording) for his latest album, 2018’s My Mood Is You.

You grew up in a household that regularly hosted famous visitors. As a kid, did you recognize Count Basie, Duke Ellington and Lionel Hampton as the musical giants they were?

They were friends of my parents. I learned about them as I grew older. My mind was on other things as an eight- and nine-year-old kid; I played ball and did other stuff like that.

What’s the best piece of advice you ever got with regard to music?

And have you followed that advice?

Who might you name as the biggest influence on your vocal style and your approach to playing the piano?

For vocals, Billy Eckstine. On piano, John Lewis, Ahmad Jamal … I know so many great piano players, and I’d hate to start calling names because I might miss somebody.

If you had to guess, how many songs do you think you have in your repertoire?

I’m guessing it’s more than that …

Yeah. I don’t know; I really don’t know. When I sit down and play the piano, then my clock starts to ticking.

Is there one song you can point to as a favorite?

Yeah, “Polka Dots and Moonbeams.” It [might not] be special for you; it could be for me. It’s very difficult to say. Because if I play an E♭7, I might play it a different way than you play it. But it’s still the same chord.

Listening to My Mood is You, I’m struck by the quality of your voice. What do you do to keep your voice in shape?

Nothing special; I just try to keep on singing, think about what I’m doing and try to be more creative.

Your professional career extends back some sixty years or so. Can you tell me about the first experience you had when you felt that you had “made it”?

Well, I’m still looking for that feeling myself. No, you never think you’ve made it. To be respected by my peers is the most I could ask for.

What motivates you to make music and perform?

I guess it’s getting the word from the Old Master. Because without Him, we couldn’t make it.