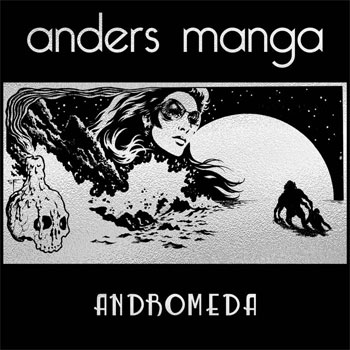 Modern recording technology being what it is, in 2020 it’s no longer remarkable to find an album created by one person that still sounds like the work of a complete band. But it’s far from a given, and remains refreshing to encounter. Anders Manga is an Asheville-based artist working in the idiom of darkwave, but his work leavens that genre’s undertone of melancholy and danger with a striking sense of melody. His latest release, Andromeda, is an exemplar of that balance.

A fascination with the (shall we say) more outré and less mainstream methods of human interaction lies at the heart of singles like his 2004 debut One Up for the Dying, the clattering, industrial-influenced 2006 album Left of an All-Time Low and 2018’s “Venus in Furs” (named after Leopold von Sacher-Masoch’s 1870 novella).

But on Andromeda, Manga seems to have refined and sharpened his approach. His music remains mostly moody minor keys. And the style suits the artist’s lyrical concerns, even when they’re comparatively conventional.

The album’s opening track “Rosaries and Requiems” is among the most musically appealing work he’s yet to produce. With a sound that subtly recalls both the Cure and the Cult, the track displays tight songwriting, careful arrangement and a signature synthesizer melody all but guaranteed to work its way indelibly into the listeners’ brain.

Befitting its title, “Night of the Witch” is energetic and sinister. With a vocal texture reminiscent of Gary Numan at his sharpest, Manga howls over the macabre soundscape with an insistent rhythm section. “Serpentine” carries on the darkwave vibe, but does so in a manner that expresses mournful regret. If Jim Kerr’s Simple Minds was possessed of a bleaker mindset, that group might make music like “Serpentine.”

Coming from another artist, “When the Lights Go Down” could be a love song; in Manga’s hands it’s something decidedly more dangerous, but every bit as alluring in its own way. Manga’s aural palette give the song a wide-screen feel, a quality shared by all of the album’s tracks: Andromeda has a big and beautiful sound that begs to be played at high volume.

“Atomic Sky” uses a different set of keyboard sounds than are found on most of the album’s other songs. It’s easily the most melancholy tune on the album, a character reinforced by understated and atmospheric use of acoustic guitars, placed deep in the mix. Manga’s vocal range – sonorous low notes, soaring high ones – is showcased to its best effect on this superb track.

“Breathless” rocks out in a big way. Removed from the context of the album as a whole, it might give a first-time listener the sense that Anders Manga is a retro, ’80s-styled artist. But heard among the album’s six other cuts, it doesn’t feel dated at all; Andromeda undeniably draws from that bygone era, but Manga doesn’t allow himself to be hemmed in by its conventions.