It’s not unusual for a singer-songwriter to pen raw and emotionally honest lyrics. But some subjects remain largely taboo. Yet that didn’t dissuade Gold Rose singer, guitarist and songwriter Kevin Fuller from writing and recording “The List,” a song about suicide sung from a first-person perspective. That track is a standout cut on his band’s debut album, Dust. Gold Rose celebrated the album release with a February 23 show at the Mothlight in Asheville.

Fuller recalls writing “The List” about a year and a half ago. “The song just came out of me,” he says. “I think the context of its themes were subconscious; I didn’t realize until months later what the song was about.” Listening today, it’s pretty clear where the lyrics are going. “I realized, ‘Holy cow: this is what this is,” he says. “’This is me, imagining committing suicide and [then] trying to communicate with people.” 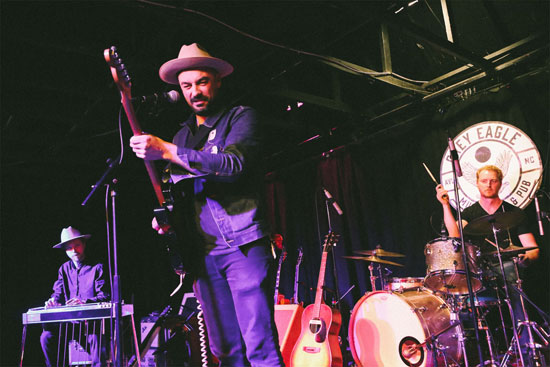 “The List” shouldn’t be viewed as a cry for help, though. While Fuller shares that he has struggled with mental health issues, for him, songwriting provides a kind of catharsis, helping to put things into perspective. Rather than writing songs to order or deadline, he responds to inspiration when it strikes him.

“I had a good ten to fifteen years of not working that way,” he admits. “It was like, ‘Now it’s time to write a song. What do I have?’” He says that method didn’t produce any songs of substance. But while living in Portland, Maine and going through a rough emotional patch (“I almost ended up in a mental hospital,” he says), Fuller found himself moved to write.

“I wasn’t even planning on writing anything,” he recalls. “But all these songs just poured out of me. I started playing. I had a couple of hooks, started singing stuff, and grabbed a notebook and wrote everything down. Everything had flipped, from ‘I need to sit down and write a song,’ to ‘I’m going to write a song when I have something to say.’”

When Fuller recorded “The List,” he posted a clip of it on Gold Rose’s Facebook page. In the post, he framed the song as an opportunity to begin a dialogue. “I’ve seen my mental health diminish lately, and thanks to some friends, I’ve gotten some help,” he wrote. “If you need help, don’t be afraid to ask.” And he made clear that the offer wasn’t an empty one: “I’d walk off stage to hear your worries.”

Fuller says that the response was uplifting. “I had so many people reach out to me through DM’s, texts and even phone calls, saying, ‘Hey man, we’re here for you.’ That in itself was so heartwarming to me, and it also was part of the original message I was trying to convey: Life is hard, and it’s okay to struggle with mental health issues.” In a sense, the experience of creating and sharing the song brought its composer full circle. “I think that the response that I got from it was the actual message I was trying to send,” he says. “If that makes any sense.”

The character of Gold Rose’s Dust is rooted in outlaw and alt-country styles; Fuller calls it “Americana deluxe.” And while the music itself is warmly inviting, the songs have a haunted, slightly unsettled ambiance. There’s an introspective and often melancholy vibe to sings like “Jesus Saves” and “Moving Day.” Elsewhere, “Stuck in Appalachia” strikes a moody Southern Gothic tone.

An while Fuller found that sharing “The List” led to a deeper connection with listeners, he says that’s not his primary goal. “I’ve never set out with the goal of doing anything other than expressing myself,” he says. “To me, music is a sort of therapy. I don’t ever write a song thinking, ‘If someone were to hear this what would they think?’ Or, ‘What would be the message they receive?’ I’m writing for myself. It doesn’t matter if anyone ever hears it.”

But he doesn’t deny that his songwriting can do more than that. He finds value in “re-purposing these themes and saying, ‘Let’s have a conversation. I’m here. I’m vulnerable. Because it’s okay. It’s okay if you’re struggling. And it’s okay to ask for help.”