A Chat with Darrell Scott 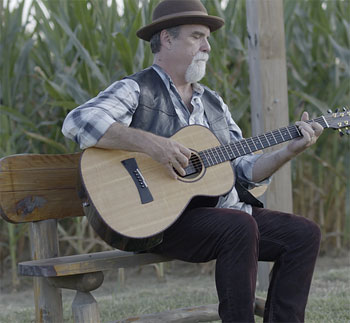 Darrell Scott is well known for the songs he’s written that have been recorded by others including Dixie Chicks, Beyoncé, Keb’ Mo, Faith Hill and Travis Tritt. And in 2010 the award-winning Nashville singer-songwriter was tapped as the multi-instrumentalist for Robert Plant’s Band of Joy. But all of that threatens to overshadow his rich and appealing recordings—more than a dozen albums to date—and solo shows.

For lack of a better word, they made it a little more literary. I attempted to be a better writer like what I had been reading.

You’ve done a lot of writing on your own; you’ve also done a lot of collaborative writing. Are those completely different experiences and processes for you?

They’re similar in that we’re still trying to get something really good in either case. The benefit to having a co-writer is that if I’m not really hitting on all cylinders, I have someone else to depend on for some of that. And vice versa: when they’re kind of stuck on something, I may very well have a way out of it. Two creative people getting together with lots of experience on their own may have a hard time saying, “We’re stuck. We can’t do anything.” The best scenario is that you’ll come out with the best of the two writers in a particular piece, something that neither of them would come up with on their own.

Where do your lyrical ideas come from, and then how do you transform them from ideas into songs?

They largely just kind of tap me on the shoulder and get my attention. They’re out of experience, or seeing something in the news, or that’s going on in my life or somebody else’s life. Or I could have gone to a movie, read a book or read an article that stirs up stuff. Then, the next thing you know, it’s translating itself to showing up with me feeling like I need to sit down and write this idea that’s coming out. Something is happening sort of outside of my general experience; something sort of extra-sensory going on, something that can’t be denied. It really is called inspiration

So, my job then is to translate and be ready for that thing that’s coming through to turn it into whatever it wants to do. Something that’s not fruitful at all is to take something and turn it into what I want it to do. I feel, if there really is an inspiration, then it actually came with other things that it brought with it, too. Like a particular kind of melody, composition, or kind of language. It comes with some of those sensibilities too, if it’s a full-tilt inspiration thing.

When you’re writing, what consideration, if any, do you give to a song’s potential suitability or use by other artists?

I try not to think of it at all because it doesn’t help the process. If it did, I think I would embrace it and say, “Okay, today I’m writing one for X, Y, or Z.” But the truth is, as soon as that other kind of sensibility enters a creative place—to me, at least—it basically shuts down the creative thing. The creative thing wants to be unencumbered, closer to purity, and closer to just real expression; as soon as the brainpower kicks in and says, “Oh, you know what? So and so would like this,” suddenly the song turns to a shitty song that sounds like you’re trying to pitch it for somebody. And those are never better songs. The better songs are the ones that come out whether someone cuts it or doesn’t cut it.