Among music fans living in mainland United States, there’s relatively little knowledge of Hawai’ian music. And what awareness there is centers largely around Don Ho’s “Tiny Bubbles” and Bing Crosby’s holiday classic “Mele Kalikimaka.” Those commercial smashes merely hint at the rich musical culture of the 50th state. One of the prime exponents of Hawai’ian music – bridging the gap between tradition and current pop – is Waipuna.

And as moving and popular as Brother Iz’s 1990 reading of “Somewhere Over the Rainbow” may be, Waipuna bassist Kale Hannahs wants people to know that “it’s not a Hawaiian song. And there’s so much more to Hawai’ian music.” 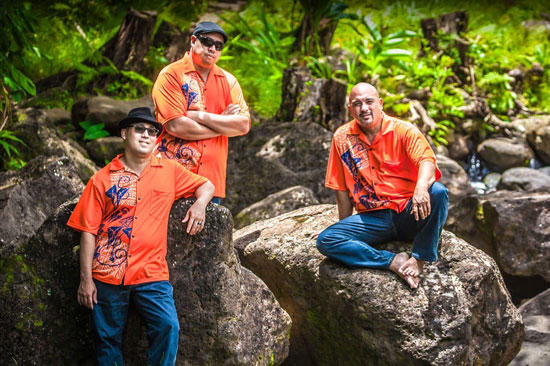 But Waipuna – recipient of seven Nā Hōkū Hanohano awards (the Hawai’ian version of the Grammys) – is more focused on exploring the connections between popular music and the traditional sounds of the Pacific island state. While he readily concedes that Waipuna’s music is accessible to listeners who have little familiarity with its origins, he emphasizes that “it’s not just for enjoyment. Some people might take it on a surface value, but the songs are very deep.”

Hannahs talks about the multiple levels of meaning in songs like “Na Makani ‘Eha,” a standout track on Waipuna’s third album, 2013’s Napili. It’s about a song written by the late Hawai’an musical icon Reverend Dennis Kamakahi, who also happens to be the father of Waipuna’s ukulele player David Kamakahi. “It’s about the Four Winds,” Hannahs says. But it’s really about a relative of the Kamakahi family, he explains.

“As his sailing boat would go into each of the different ports, he would try to woo ladies by using the same lines, saying ‘You are the most beautiful girl.’” The poetic language used to tell the tale conveys emotion, and the feelings expressed can be felt by listeners who don’t understand a word of the Hawai’ian language.

“We call the underlying meanings of the songs kaona,” he says. “There’s a surface-level meaning, a secondary meaning, and there’s a third level of understanding.” At face value, a Hawai’an song might be about a flower and a bird. “But the underlying meaning would be that the flower represents a woman and the bird represents a man,” Hannahs explains. “And the third level would be knowing who those people are and what exactly happened to inspire that composition.”

The three members of the group bring varied backgrounds. Hannahs has been playing Hawai’ian music for 25 years, but his foundation is in classical music. Spriat is the great-grandnephew of storyteller, musician and NEA National Heritage Fellow Kindy Sproat. “Matt has an extensive background playing hula music,” Hannahs says, “but he started off playing heavy metal.”

Language isn’t a barrier, Hannahs has found. The group plays all over the world, including monthly concert dates in Japan. “Connecting with audiences over there is just as important as connecting to people on the mainland when we tour,” he says. “So I’ll mix in a little bit of Japanese here and there, just to help them understand the songs.” Between-song narration is an important part of a Waipuna concert, providing context for the music and stories. “Even some Hawai’ian listeners don’t understand all of the Hawaiian language,” he admits. “So adding that extra layer of understanding helps our audiences and our friends to get at least half-way there. And that means the world to us.”

Across their five albums, Waipuna weaves together stories from the group’s homeland, sung in both English and Hawai’ian. And the trio succeeds at placing each of those stories into a catchy, heartwarming musical context. Hannahs recalls a conversation with band mate Matt Sproat (guitar) during the making of Waipuna’s most recent release, their 2019 self-titled album.

“Matt started saying that the music we were working on sounded ‘too typical,’” he recalls. They agreed that they needed to write every song to be a potential hit. “No clunkers,” Sproat told him. “You’ll notice that in a lot of our songs, we do key changes and switch off voicings to help build the story – or just the feeling – of the song,” Hannahs says. “We want to take the listener on a journey.”