UFO’s “Last Orders” tour — its final round — wraps up this week. Here’s a look at the beloved hard rock band, previously published in New City.

In the late 1960s and early ’70’s, hard rock guitar-based groups roamed the Earth. The best among those combined memorable riffs, instrumental pyrotechnics and high energy performances. Near the front of the pack – and paving the way for the New Wave of British Heavy Metal – was UFO. Founded in London in 1968 by singer Phil Mogg (who still leads the band today), UFO churned out an impressive series of albums; the group’s latest, 2017’s cover-fest The Salentino Cuts – is its 22nd full-length studio release. 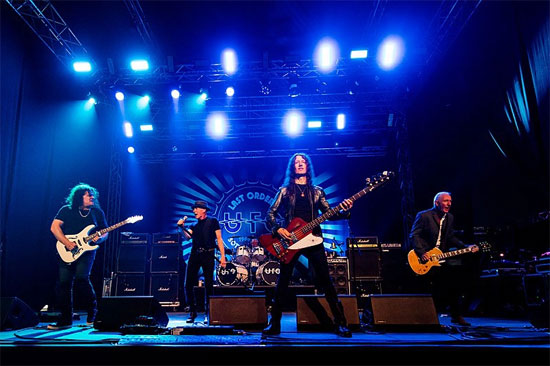 That album is also the final studio offering from the long-running hard rock band. After the death of keyboardist and guitarist Paul Raymond in 2019, Mogg announced that the band would cease operations. But first there’s a final tour, dubbed Last Orders USA. The tour includes a dozen live dates in the Eastern U.S., to be followed by a farewell performance as part of the Rock Legends Cruise departing form Port Everglades, FL.

UFO songs – and albums – have long been characterized by searing electric guitar work, a tight, powerful rhythm section and strong vocals (the latter often an area in which many guitar-focused hard rock acts have failed to shine). Beginning with the band’s third album, 1974’s Phenomenon, UFO enjoyed consistent chart success; ten albums all in a row would chart in the U.S. The band was nearly as popular in its native England, with 1980’s No Place to Run earning a Silver certification.

1977’s Lights Out represented a high water mark for UFO. The album featured a faithful reading of Love’s baroque-psychedelic classic “Alone Again Or,” and Kerrang! Magazine listed the LP at number 28 on its list of greatest heavy metal albums.

And after years in the commercial wilderness – a time during which Mogg and his band mates would witness a raft of successful bands who owed a significant debt to UFO’s hard and heavy approach – the band once again gained a presence on the UK charts; beginning in 2009, all three of successive albums would chart in Great Britain.

Among UFO’s most popular release, though, is 1979’s Strangers in the Night, a live set culled from amphitheater dates in Chicago and Louisville, KY. The band’s onstage firepower has long been a key to its appeal; to wit, UFO has released no less than 15 live albums; the last was a 4 CD boxed set, Live Sightings, documenting the group at one of its peaks in the early 1980s.

Underscoring the wide appeal of the band, UFO also managed to score a number of minor hit singles over the years; their most well-known song is “Doctor, Doctor.” A live recording made the U.S. Top 40 in 1979, but the band also enjoyed a half dozen other charting singles.

Beyond the stadium-ready voice of Phil Mogg, the group has featured an impressive roster of musicians. Former Scorpions guitarist Michael Schenker was with UFO for four different runs, appearing on more than 10 of the band’s releases. Acclaimed guitarist Vinnie Moore has handled lead guitar duties on every UFO release from 2004’s You Are Here to present day. And foundling drummer Andy Parker remains a key member of the band as it approaches its final performances.

It’s nearly impossible to imagine the careers of bands like Metallica, Slayer, Dokken, Judas Priest or Iron Maiden without acknowledging the impact that UFO had upon their sound. That’s worth remembering as these grand old men of hard rock/proto-metal take their victory lap.