Come and Get It: Badfinger’s ‘Magic Christian Music’ at 50 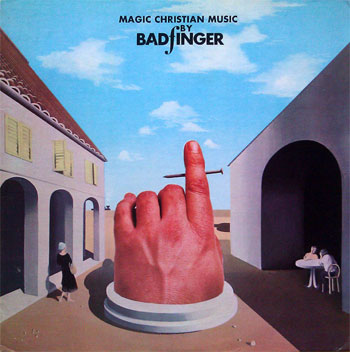 With the benefit of a half century’s hindsight, it can be argued that despite massive creativity and talent, Badfinger was star-crossed nearly from its start. Though the British-Welsh band were protégés of the Beatles, that connection only got them so far. The vicissitudes of the record industry and other factors combined to blunt the potential of the band. But along the way – and despite the odds – they would leave a body of work filled with gems. Unlike Big Star – a group to whom they’re sometimes compared – Badfinger was prolific, releasing six albums during the band’s original run, and scoring four Top 40 singles in the U.S., Canada and the UK.

The best history of Badfinger’s complicated and ultimately tragic story is Dan Matovina’s Without You. Originally published in 1999 and now long out of print, it sells on the used market for upward of $150 (there have been rumors of an imminent updated version, but nothing official has been announced). Suffice to say that the band’s saga was filled with occasional highs, frequent lows, managerial malfeasance, and two suicides.

Badfinger’s music – especially its lyrics, written variously by all its members – reflects much of that turmoil, and at least from an artistic perspective, it’s more the better for it. But in the group’s earliest days, when the foursome was still known as the Iveys, much of the emotional upheaval that characterized their work was still ahead of them.

The Iveys landed a contract with the Beatles’ nascent Apple Records, and released a now very hard to find LP called Maybe Tomorrow. At that point, the group featured guitarist Pete Ham, guitarist Tom Evans, drummer Mike Gibbins and bassist Ron Griffiths. For reasons never fully understood – but likely involving Apple’s then-president Allen Klein – the group’s debut (and only) album, Maybe Tomorrow would be released only in Italy, Japan and West Germany. Unsurprisingly, it flopped. The album was a patchwork affair, compiled from sessions headed by two different producers, Beatles roadie Mal Evans and Tony Visconti (the latter to gain fame as one of the best producers in the business).

Maybe Tomorrow got its limited release in July 1969. But things changed quickly: by January 1970 the group had a hit single, a new name and a new bassist. Griffiths had left the band, the Paul McCartney-produced-and-written single “Come and Get It” became a hit for the newly-christened Badfinger. And to capitalize on the success of the single, Apple put together Magic Christian Music.

Named after the movie that featured the “Come and Get It” single, Magic Christian Music had little if anything to do with the movie. Seven of its tracks are remixed versions of songs from The Iveys’ Maybe Tomorrow. With the addition of the previously-released “Come and Get It” and its b-side, (the group-composed and McCartney-produced “Rock of All Ages”) the new album would only feature only a handful of new tracks. But to the wider listening public, Magic Christian Music was for all intents and purposes a new record. 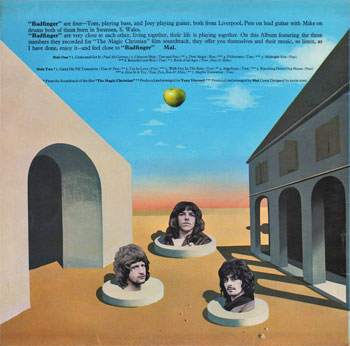 The American release of Magic Christian Music had 12 tracks, while the UK release featured 14. And the running orders differed. But both shared the patchwork character of Maybe Tomorrow. On the upside, the album showcased group’s stylistic breadth. But for a new and largely unknown act, it presented a somewhat confusing collection of songs: some listeners may have wondered, “What kind of band is this Badfinger after all?”

They may have wondered as well who was in the band. By the time of the album’s release, Joey Molland had joined as lead guitarist. But he’s not on the LP. The reason for Molland’s absence is easy to explain: he wasn’t in the group when the songs were recorded (not even “Come and Get It” and “Rock of All Ages”) and apparently he didn’t join in time to be included in a photo session. So though he’s listed on the sleeve, that’s the only connection he has to Magic Christian Music. He’d assume a larger role on Badfinger’s second album, No Dice, released in November 1970, and would remain a key composer throughout the group’s most prominent period.

The brief liner note on the record sleeve’s reverse didn’t help matters. Mal Evans’ notes mention Tom (Evans, who was now the band’s bassist) as well as Pete (Ham) and Mike (Gibbins). But they also list guitarist Joey (Molland; no last names are given). The photo collage on the record’s back shows – but does not identify – only Ham, Gibbins and Evans.

The record opens with the pop-rocking “Come and Get It.” Tom Evans sings lead, but other than that, the song is a near carbon copy of a demo McCartney recorded himself. The melody is primarily piano-based with a minimum of guitar work. “Crimson Ship” is an Evans-Ham cowrite, and features a dual lead vocal by the two songwriters. Ham’s rich voice stands out a bit in the mix, but Evans’ high harmonies add grit. The tune – a ballad on the verses and a rocker on the chorus – has plenty of tasty lead guitar to recommend it, though it too is piano-based.

That dual lead vocal is employed in places throughout “Dear Angie,” a light pop piece written by Ron Griffiths. Visconti’s production work is a delight, but doesn’t portray Badfinger as anything approaching a rock band). And listeners may have wondered who this Ron person was. 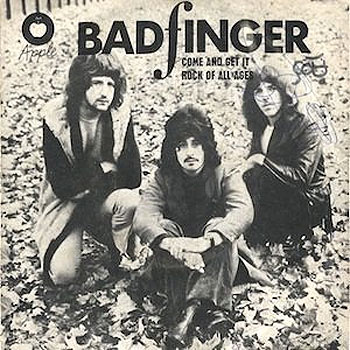 Tom Evans’ “Fisherman” has a feel very much in line with the kind of folk music he likely heard growing up in Liverpool. Like “Dear Angie,” it also doesn’t rock. But for that, listeners need only hang on for the next track. Pete Ham’s riffy rocker “Midnight Sun” is a basic I-IV-V piece of rock ‘n’ roll, but it’s very catchy, and highlights his superb voice.

Evans’ “Beautiful and Blue” takes things a different direction. Sounding more than a bit like Grapefruit (another band with a Beatles connection), it feels a bit dated by 1970 standards, with a sound closer to the slightly twee British popsike that enjoyed a brief heyday in the wake of Sgt. Pepper. But again, Visconti’s production and the song’s string work are lovely.

The single b-side “Rock of All Ages” is something of a rote rocker, but its inclusion does make the point that Badfinger could rock out when they wanted to. Tom Evans’ vocal is reminiscent of producer McCartney’s work on the Beatles’ b-side “I’m Down.”

But after increasing the heart rate of listeners, Magic Christian Music shifts gears again for “Carry On Till Tomorrow.” A beautiful ballad of heart-rending intensity, musically it has much more to do with the soft rock of The Iveys than the power pop direction Badfinger would pursue going forward. With its chiming acoustic guitars, gentle Evans vocal and ethereal harmonies, it’s a tour-de-force; it’s just not a rocking one. The electric lead guitars that appear in the middle of the soaring orchestration add some heft to the already impressive McCartney-produced track. But in some ways, “Carry On Till Tomorrow” represents something of a dead end for Badfinger; never again would the group craft anything like it (though moments on 1974’s Wish You Were Here – arguably their most fully-realized effort – approach the grand scale of the song).

Coming on the heels of that song, “I’m in Love” – written by Ham but sung by Evans – suffers a bit. The vaguely jazzy, shuffling tune sounds a bit like it could be a lesser track from the Beatles’ White Album.

Pete Ham’s “Walk Out in the Rain” shows its composer’s astounding ability to write a memorable ballad. It’s along the finest songs from the pen of a criminally underrated songwriter, and previews the sort of melancholy lyrics he’d produce in the coming years. Perhaps the only way in which the Mal Evans-produced recording might have been improved would have been to further overdub Ham’s vocal for all of the harmony parts; as fine a singer as Evans was, he’s a bit miscast here.

Tom Evans’ sweet ballad “Angelique” is nice enough, but feels a bit plodding and underdeveloped; it sounds more like a demo than a finished studio recording, though the harpsichord is a nice addition. The song’s brief middle eight suggests the subtle influence of the Beach Boys’ Pet Sounds. (Angelique was left off the American LP).

One of the oddest tunes on Magic Christian Music is Pete Ham’s “Knocking Down Our Home.” The retro-feeling tune sounds like a cross between Gerry and the Pacemakers’ “Ferry Cross the Mersey” and the sort of throwback tunes in which Paul McCartney occasionally engaged (cf. “When I’m Sixty-four,” “Honey Pie,” “You Gave Me the Answer,” etc.). 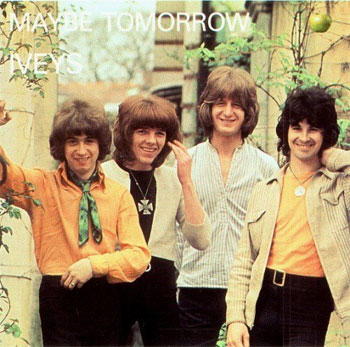 The title track from the Iveys’ sole album closes the original vinyl release of Magic Christian Music. Evans (its composer) and Ham harmonize beautifully, and the heavenly string arrangement makes the song extra-special. When Evans is singing alone, he sounds quite a bit like Small Faces’ frontman Steve Marriott.

Inexplicably left off the American edition of the LP, the Iveys-era tune “Give it a Try” is prototypical power pop. It sounds like Sweet more than a year before the glam heroes released their first record. Chirping vocals coexist with Who-like guitar chording. And yet again, the string section on the Tony Visconti-produced track is sublime.

Like all of Badfinger’s Apple-era releases (and their later Warners LPs as well, but that’s another story), Magic Christian Music was for many years out of print. It was first reissued in 1991 on CD with two bonus tracks, including the catchy “Storm in a Teacup.” In 2010 the album received another reissue, this time eliminating that track and “Arthur” from the previous reissue, and adding five different cuts. The highlight of those is undoubtedly the powerpop raver “And Her Daddy’s a Millionaire,” sounding like a cross between Revolver-era Beatles and early (pre-disco) Bee Gees. The deleted bonus tracks (plus four others) were available as digital bonus tracks.

The band quickly began work on a followup to Magic Christian Music, this time with Joey Molland as part of the group. By the time of No Dice, Badfinger’s sound had coalesced more (though certainly not completely) around Pete Ham’s voice. All members wrote and sang, and the future looked increasingly bright. But history has a way of not going as planned.