In the music business there’s something known as the “difficult second album.” Some call it a sophomore slump, arising from the idea that the artist has his or her entire life to write songs for the first record, and then mere months to craft material for a follow-up. It’s the rare artist that sidesteps this curse. Guitarist, singer and songwriter AJ Haynes of Seratones believes she has done so with Power, the latest release from her soul-rock group. 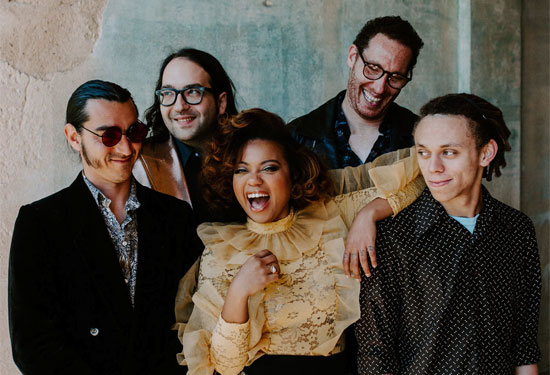 “I honestly feel like this is my first album,” she says, explaining that 2016’s Get Gone was “very much an experimental kind of thing: ‘How can I be a ribbon of sound around all this really, really heavy stuff?’” For the new album, Haynes also placed a much greater emphasis on lyrics, exploring her own narrative. “The first album is just me infatuated with the occult history of rock and roll, playing around with archetypes,” she says. “Power is more introspective, more from my story.”

Another characteristic of the music business is that it expects a new release from an artist every 18 to 24 months or so. But fans of Seratones’ debut had to wait more than three years for a follow-up album. Haynes doesn’t see a problem. “The ‘industry standard’ is such an unstable, arbitrary concept,” she believes. “Everyone agrees to it, but no one knows quite why. And it’s done at the expense of the musician’s mental health and welfare.”

Haynes emphasizes that she and her band mates took just the amount of time needed to make Power. “I don’t feel like the time was too long; it felt just right.” She thinks that the push to do things on a strict timetable is pointless. “Not only in the music industry, but in this very Western/American mindset we are racing towards something,” she says. “But what is it?”

With Power, Haynes has taken the time to dig into themes that intrigue her. While it’s not a concept album, the record’s lyrics do center around some core ideas. “It’s about questioning power dynamics,” she explains. “Oftentimes we associate power with force or aggression, but I don’t feel like I’ve experienced that kind of power in my life.”

She says that the power she has felt can be described as “both soft and loud, both inviting and a threat. And we can have all of this together. We live in a world constructed by these binaries and power struggles that seem wildly unnecessary. They’re detrimental to our welfare.”

And although Seratones’ latest album is hopeful and forward-looking in that regard, for inspiration the group continues to consider the past. “For the first album, I was thinking of what can be done,” Haynes says. “With Power, I was looking at what has been done.” She cites the collaborative nature – both in terms of songwriting and musicianship – that characterizes the best music from the Motown scene of the 1960s and ’70s. Haynes drew from that approach by working with people outside of the group.

“Really digging into the collaborative process, I learned how a song touched by different hands becomes this really cool thing,” Haynes says. “It doesn’t detract from its uniqueness.” For Power, that meant collaborating with producer Brad Shultz and songwriters Austin Jenkins, Lewis Pesacov and Daniel Tashian. She says that she learned from their different perspectives, but still held true to her personal lyrical narrative.

Haynes believes that spending time in Los Angeles fired her creatively as well. “I hate to [connect] inspiration to geography,” she says, but she is convinced that the city has something special. Though Pablo Neruda was referring to San Francisco Beat poets when he used the phrase, Haynes says that L.A. has what the poet described as “wide-open poetry.”

But Haynes still has strong roots in her native Shreveport, Louisiana; Seratones came up in the city’s fertile music scene. She believes that being out of the national spotlight while developing was a key to the group honing its craft. “There’s an openness where no one is looking at us,” she explains. “’What are we doing here? Who cares? Let’s just see, instead of being places to be seen.’”