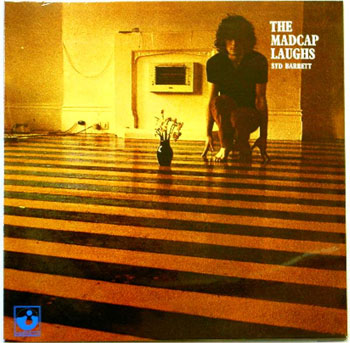 In early 1968, mere months after Syd Barrett left (or was dismissed from) Pink Floyd, his management team of Peter Jenner and Andrew King encouraged him to begin work on a solo album. Upon Barrett’s exit from Pink Floyd, Jenner and King had cast their lot with Barrett, believing that the prime architect of Pink Floyd – and its primary songwriter – had the better potential for ongoing creative and commercial success. In a 1996 interview, Rick Wright recalled that the band’s managers “thought Syd and I were the musical brains of the group, and that we should form a breakaway band, to try and hold Syd together.” Barrett’s managers thought that his unschooled approach would combine effectively with Wright’s more traditional musical foundation. “I doubt if Syd could read music,” Jenner says. He had observed Wright’s strengths within the context of Pink Floyd. “Rick could read music; he knew what chords were. He was always the one who set the harmonies and things in the studio,” Jenner recalls. “If we said, ‘let’s have some backing vocals,’ he would be the one who would get the notes together for them.”

That January, Wright and Barrett were sharing a flat in southwest London. “Believe me,” Wright told interviewer Mark Blake, “I would have left with him like a shot if I had thought Syd could do it.” But by most accounts, Barrett could not.

Jenner had seen potential in the few songs Syd had written near the end of his time with Pink Floyd, though he was fully aware that the material was not of an especially commercial nature. “As his songwriting became more interesting, it also became more sort of weird and psychotic,” Jenner says. “It wasn’t what the record company wanted.” An attempt was made to get Syd – now a solo artist – into the studio. But early recording sessions with Jenner producing yielded little suitable for release; the producer would later admit that he had underestimated the difficulty of working with Barrett in his current state. Today, Jenner says that working with Syd reminded him of the electric trolleys he encountered as a child in postwar London.

“You’d stand there in the fog and you couldn’t see anything,” Jenner says. “Trolley buses were silent; they were electric, so this light would come toward you out of the fog, and then it would disappear away again into the fog. And I always thought that that’s what had happened to Syd in the studio. Something would emerge from what he was doing, and we’d say, ‘Oh, that’s good! Can we get more of that, please? Can you do that again?’ And then he would go back into the fog. And then the next time he came out of the fog, it was something different.” Shortly after those abortive May 1968 sessions, Barrett returned to Cambridge and went under psychiatric care.

By the end of the year, Syd seemed well enough to return to work on recording his debut album. The project was handed off to Malcolm Jones, the head of Harvest Records, EMI’s progressive subsidiary label. Sessions with Jones producing took place in April 1969, focusing on both new recordings and overdubs and edits to the 1968 tapes. Barrett enlisted the help of friend Willie Wilson from Jokers Wild, David Gilmour’s old band.

“I knew Syd from when I lived in Cambridge,” Wilson recalls, noting that Barrett sometimes sat in with Jokers Wild. Once David Gilmour joined Pink Floyd, he, Wilson and Syd all lived in close proximity to one another. “Syd just said to me one day, ‘I’m going into Abbey Road in a few days’ time; will you come and play drums on a couple of tracks?’”

The handful of recordings in which Wilson took part would initially feature only him and Barrett at EMI’s Abbey Road. “It was a huge, cavernous studio. I had my drums, and Syd had his Telecaster.” Wilson’s friend Jerry Shirley – drummer for Humble Pie – was at Abbey Road as well. “I was a chauffeur,” Shirley says with a laugh. “You couldn’t rely on Syd to get himself there. They needed somebody reliable to make sure Syd got to Abbey Road. I had a car, and Willie had a license.”

“After we recorded the tracks, it was then decided that bass was needed,” Wilson says, “So Jerry got the job.” “They needed a bass player and there wasn’t one,” Shirley recalls. “But there was a bass. So I picked it up and played it.”

“But because of Syd’s erratic chord changes – and Jerry not being an actual bass player – he found it really hard,” Wilson says. He describes Shirley’s bass on those tracks as “a bit of hit and miss as far as the particular note he should be hitting.” Shirley recalls adding “percussion bits and pieces” for several tracks on The Madcap Laughs as well.

Even though The Madcap Laughs sessions represented the first time Wilson had been in a recording studio, Syd’s loose style of playing didn’t present a challenge for the drummer. “Not having to follow a chord sequence, it didn’t really make a lot of difference to me,” he says. “Syd was fine rhythmically.” Comparing Barrett’s approach to meter with that of old blues men, Wilson says, “if it sounds right in your head, then you do it that way.” Shirley concurs. “That was Syd all over. He was obviously listening to a lot of blues when he was younger.”

Barrett didn’t offer much in the way of direction for Wilson, leaving him free to sort out his own drum parts on the Jones-produced sessions. “I don’t seem to remember too much of anybody saying, ‘This is what you should do,’ or, ‘That’s what you should do.’ So I just played as I played at the time.”

Later sessions involved overdubs to Barrett solo recordings; those featured three members of Soft Machine: bassist Hugh Hopper, keyboardist Mike Ratledge and drummer Robert Wyatt. These sessions, too, were fraught, as Barrett’s idiosyncratic approach to songwriting – coupled with his mental instability – made communication and progress difficult. Though they would yield recordings for use on the final album, in general those sessions with Malcolm Jones producing didn’t go well, and by the end of May 1969, Jones had given up. Wilson says that Jones “found it a bit hard going; he couldn’t quite keep up with Syd, the way that Syd was. So Dave and Roger took over production on that.”