Album Review: Louis Armstrong and His All Stars — Live in 1956 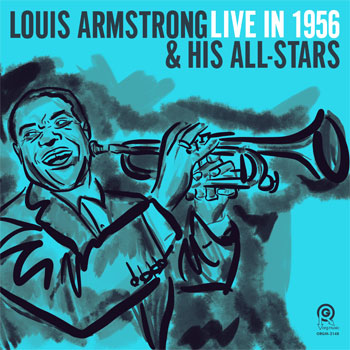 Though he had certainly been massively popular before, in the middle 1950s jazz trumpeter and vocalist Louis Armstrong was near the top of his game. In 1947 he broke up his big band and formed a new group, the All Stars made up primarily of former leaders of other bands. Louis Armstrong and His All Stars performed all around the globe to enthusiastic audiences, showcasing a set that expanded far beyond his early Hot Five style to include current pop hits done in Armstrong’s inimitable style.

Among collectors, a high quality audio document of a 1954 concert at the University of North Carolina at Chapel Hill is well regarded. And while there have been many official recordings from that period, the discovery of previously unheard Armstrong live tapes is always a welcome event.

For Record Store Day in November 2019, ORG Music released such a recording, a vinyl pressing titled Live in 1956 (Allentown, PA). And now in 2020, the limited-release album is receiving a wider distribution. With good (not great, but many notches above what passes for a bootleg) fidelity and a top-flight set list, Live in 1956 is prime Louis Armstrong. Satchmo plays his trumpet, sings and scats, and engages in warm and lively repartee with both his band mates and the audience.

Even though cool jazz, third stream and hard bop were all in various stages of ascendancy at the time, Armstrong’s winning personality, superb chops and inspired choice of players made for an excellent show. Whether he’s turning in a cover of Fats Domino’s “Blueberry Hill” or stepping aside to let pianist Billy Kyle tear up the ivories on the manic “Perdido” the energy never flags. The band’s approach is commendably democratic, even giving space for the upright bass-led “Blues in B♭” featuring Squire Gersh.

A medley of “Tenderly” and the Rodger-Hammerstein classic “You’ll Never Walk Alone” is taken at a funereal pace, but Armstrong and His All Stars bend the song toward a New Orleans second line character that its composers cold likely have never imagined. Guest vocalist Velma Middleton joins the band for a hoary and rousing blues, “Mama’s Back in Town.” And Armstrong returns to the vocal mic for a pair of French-themed tunes, “C’est Si Bon” and “La Vie en Rose.” Clarinetist Edmond Hall takes center stage for “Mahogany Hall Stomp” before the band wraps things up with a reprise of the opening track, “When It’s Sleepy Time Down South.” Satchmo scats, introduces the musicians and offers a heartfelt “thanks a million and good night.”

Discovering 40-plus minutes of Louis Armstrong live recordings in the 21st century gives hope to the idea that there might be more left to unearth, more audio documents capturing some of the 20th century’s greatest artists in full flower.

Like the limited RSD edition, the vinyl-only Live in 1956 is pressed on aqua vinyl. It’s another in an increasingly long line of thoughtful archival releases from ORG Music.