Presto: Deep Purple’s ‘Concerto for Group and Orchestra’ at 50 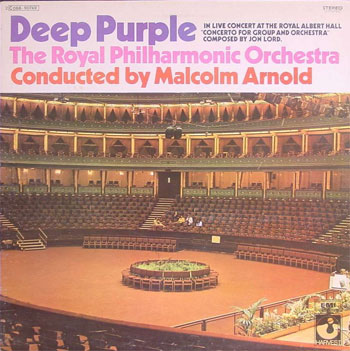 Looking back on rock history, it’s clear that the concept of rock/orchestral hybridization was fashionable for a time. Most rock listeners are familiar (and then some) with Days of Future Passed, the debut album by a reinvented lineup of Birmingham, England beat group The Moody Blues; that 1967 LP brought together rock and symphonic textures in a way that hadn’t really been explored previously. And late-period works by fellow Brummers The Move flirted with similar ideas. By the time that group had completed it metamorphosis into Electric Light Orchestra (originally led by Roy Wood and Jeff Lynne), the practice of incorporating classical instrumentation into rock idiom was well established. And of course other groups – the Beatles chief among them – had been tinkering around the edges of the hybrid concept for a few years by then as well.

So it was perhaps not altogether surprising when another British group took the plunge into the nexus of classical/orchestral music and good old rock ‘n’ roll. But in light of that group’s subsequent work, the effort has been largely (but thankfully not completely) forgotten. Classics like “Smoke on the Water” and “Highway Star” from the landmark 1972 hard rock LP Machine Head all but erased memories of Deep Purple’s ambitious (and remarkably successful) fourth album, Concerto for Group and Orchestra. Yet arguably, in its own way, the band’s Concerto is a more fully-realized hybridization than the universally (and justifiably) acclaimed Days of Future Passed.

As superb as the groundbreaking Days is start to finish, the orchestral passages were not composed by the Moody Blues; instead, conductor Peter Knight wrote the scores; he conducted and arranged them for the London Festival Orchestra as well. Less than two years later, Deep Purple entered into a collaboration with the Royal Philharmonic Orchestra under the direction of conductor Malcolm Arnold. But Arnold had no hand in the writing of the Concerto: the three-movement, mostly instrumental work was composed in its entirety by Deep Purple keyboardist and founding member Jon Lord, with occasional lyrics by the group’s singer Ian Gillan.

The First Movement of the Concerto features only the orchestra. The Moderato section begins in a minor key, with a simmering, portentous feel. Swells of strings are punctuated by sonorous tympani, and the string players seem almost to engage in a duel. A crescendo of sorts is reached quickly (this is intended for rock-leaning audiences, after all). Lord’s composition makes the most of contrasting sounds and textures, with booming brass, pizzicato strings, quiet/loud dynamics and tempo shifts. While there are straight-ahead melodic bits sprinkled liberally throughout, the arrangement itself gains in complexity as it unfolds. Some seven minutes in, a sprightly clarinet begins a solo; but just when the orchestral arrangement seems to be settling in, Deep Purple joins in the fun.

Ritchie Blackmore’s guitar introduces the rock section, but Lord’s organ and the rest of the band joins, playing a stomping, hard rock piece. Other than a few notes at the beginning of the rock section, the orchestra backs off completely. Blackmore takes a solo early in the arrangement; the rest of the band vamps along behind him. His leads alternate between speedy licks and drawn-out, sustained notes. It’s difficult to tell from the recording, but the band seems to be playing really loudly; it’s hard to imagine that the orchestra’s volume could have approached the band’s level. On tape, the two are balanced nicely, but it must have been a jarring experience for those inside the Royal Albert Hall.

Twelve minutes in, the audience is rewarded with a moment of thrilling, call-and-response instrumental interplay between Deep Purple and the RPO musicians. Then the band takes a breather while the orchestra returns. Here the music is even more dramatic, expanding upon the contrasts introduced near the beginning. At thirteen minutes plus, it’s the band’s turn again, this time with Jon Lord tearing up a searing organ solo. Deep Purple shows that it can deliver subtlety as well, bringing the volume down to allow space for the string section of the orchestra to join in. By the fifteen-minute mark, the band and orchestra are coming together as one. After a brief passage during which Blackmore plays unaccompanied, the RPO takes over once again, with dissonant, knotty lines featuring brass, woodwinds and strings. As the First Movement races toward its conclusion, the back-and-forth between electric rock group and orchestral textures continues.

The Andante section of the Second Movement is primarily string-based, though Lord adds a bit of tone color here and there on organ. About five minutes in, the band joins the strings, and Ian Gillan enters on vocals; it’s the first time any singing makes an appearance in the Concerto. The sometimes waltzing, sometimes 5/4 pop tune – with Gillan’s lyrics – isn’t credited as a discrete song; it’s merely the final moments of the first part of the Second Movement.

The second part of the Second Movement begins quietly, again with Lord accompanying the orchestra here and there. The sweeping, cinematic piece has a melancholy air that sets it apart from the First Movement. An instrumental blues characterizes the band’s contribution to the Second Movement; the string accompaniment is unexpected, and gives the arrangement a feel not unlike Procol Harum. (That group, of course, would mount its own orchestra-meets-rock-band work with 1972’s Live: In Concert with the Edmonton Symphony Orchestra.)

Some classically-minded organ soloing from Jon Lord takes center stage around the seven-minute mark. As Lord’s organ notes fade to silence, a crystalline string section enters. Its small ensemble arrangement stands out among the full-orchestral approach used throughout most of the Concerto. The final moments of the Second Movement are somewhat static and subdued.

The third and final movement of the Concerto is nothing of the sort; it opens with the blaring of horns, and an uptempo arrangement suggests something grand is just around the corner. Tympani, criss-crossing horn lines and simmering strings introduce tuned percussion and a busy arrangement that has a rock vibe (though no rock instrumentation); it feels very much like the soundtrack to the opening scenes of an epic battle on a windswept landscape.

As drummer Ian Paice furiously accompanies the orchestra, the band fades into the mix. Roger Glover’s electric bass adds a previously unheard dimension to the orchestra. For the first time in the piece, both rock and and orchestra play together for more than a few bars. Blackmore’s guitar soars while the violins, cellos and other strings add heft behind him. The band chugs along in regal fashion, building again on the call-and-response approach used early in the piece. By the four-minute mark, band and orchestra are – finally – fully combined. For most of the next several minutes, an extended Ian Paice drum solo is featured. Then the full orchestra returns, joined by Deep Purple playing a riffy melody. The Orchestra builds tension, with swirling strings that suggest a police siren. A full-on percussion interlude builds and builds, – with Lord adding roaring organ – as the piece seethes toward conclusion. The final seconds feature the band and orchestra, almost in unison.

Curiously, despite the critical accomplishment of the Concerto, this type of hybrid of rock and orchestral music wouldn’t subsequently be pursued by many artists. Instead, artists working in one genre or the other might add splashes of the opposing style into their work, not fully integrating the two. A notable exception appeared many decades later when in 2016 Mike Mills (formerly the bass player in R.E.M.) brought forth a collaboration with violinist and lifelong friend Robert McDuffie. Mills’ Concerto for Violin, Rock Band and String Orchestra many not be as grand and sweeping a work as Deep Purple’s, but in vision and spirit, the two are related.

Deep Purple, of course, moved onto different things, seemingly leaving the relatively highbrow style of Lord’s Concerto behind forever in favor of hard rock. In 1999, however, the band would return to the Royal Albert Hall, this time with the London Symphony Orchestra. The program – performed two nights in a row – included all three movements of the Concerto, presented mid-set with the LSO. A video and CD was released, and a document of two similar 2001 shows in Tokyo (with the New Japan Select Orchestra) was also eventually released as part of that year’s The Soundboard Series boxed set.

And in 2012, a first-ever studio recording of the Concerto (this time with the Royal Liverpool Philharmonic Orchestra) was released, featuring guest guitarists Joe Bonamassa and Steve Morse along with others. It would be the last project to involved composer-organist Jon Lord, who died in July of that year.