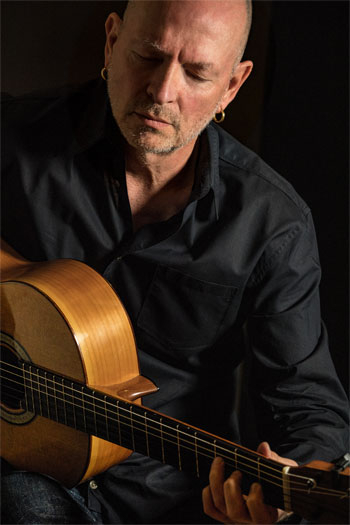 Five-time Grammy Award nominee Ottmar Liebert is German-born. His music is rooted in the traditions of Spain. And he lives in the American Southwest. Somehow, those disparate elements combine to make guitar-based music that has one foot in tradition, the other in modern, pop-style accessibility.

Though he’s a technically accomplished and ambitious musician, Liebert says that accessible character has always been part of his work. He cites his very first release, 1990’s breakout worldwide smash Nouveau Flamenco. Noting that traditional flamenco sometimes “seems to meander,” he says that his brand of the traditional style is different. “I like a strong melody,” he says. “I like structure: ‘here’s a verse, and here comes the chorus.’” He goes so far as to characterize that debut album – 14X Platinum on the U.S. Latin Music charts – as “very pop.”

Liebert manages to have it both ways: he’s a serious and highly regarded musician who just happens to make music that sounds good to the casual listener. But he says that his take on flamenco even found popularity in the genre’s home, Spain. “My music was played at bull fights,” he says. “My music was played on TV in Spain in the early ’90s. I think maybe it influenced some people there.”

He’s been a prolific artist ever since that debut. Liebert’s latest release, Fete, is his 30th album. Working with his group Luna Negra, he continues his proven approach of bridging the gap between old and new. Alongside classical Spanish guitar textures are traditional instruments like upright acoustic bass, accordion and acoustic percussion, but saxophone, fretless electric bass and even drum programs fit seamlessly into Luna Negra’s mix.

Liebert’s wide-screen approach to music developed early. Growing up in West Germany of the ’70s, he had a front row seat to the new and exciting sounds of the era. In his native Köln (Cologne), “there were a lot of great little clubs that had some amazing jazz musicians coming through,” he says. And at the theater run by WDR, West German Radio he often witnessed wildly eclectic bills. He recalls one example. “A troupe from India playing traditional music, somebody from Africa, and [German heavy metal group] Scorpions!”

The idea of combining seemingly disparate musical elements stuck with the teenage Liebert. Even though he first heard flamenco when he was 15, the idea of expanding upon it didn’t come to him until much later. “When I moved to Santa Fe [New Mexico] in ’86, people here were playing flamenco and mariachi music. And I was like, ‘Wow, this is a really neat combination!’”

Prior to his move, Liebert had been playing electric guitar, but he found it didn’t inspire him enough. “I was at the point where things felt like they had to change,” he says. So he dove deeply into studying flamenco guitar, with the goal of doing something beyond the traditional. “I took several years of flamenco lessons,” he says, “and then incorporated that stuff into what I heard in my head.”

Along the way, Liebert developed his signature sound, one that draws as much from Cuban rhumba and African musicians like Ali Farka Touré as it does from non-guitarists like Miles Davis. From his perspective, those seemingly disparate influences have more in common than one might think. “People see jazz or flamenco as these monolithic cultural achievements,” he says. “They don’t know that traditional flamenco is probably 70 percent Arabic music.”

He explains that there are fundamental similarities between supposedly unrelated musical traditions. As an example, Liebert cites the practice of musicians not playing on the first beat of a measure (“The ‘one’ is bare,” he explains.) “If you listen to tango flamenco, then reggae and then you listen to salsa, you realize that they’re doing exactly the same thing” with that one-drop rhythm, he says.

And Liebert is fulsome in his support of musical cross-fertilization. “If you want to keep something the way you think is traditional, you’re really stopping all development,” he says. Noting that in the current political climate, it’s more important than ever to celebrate the mixing of cultural traditions, he says, “in many cases, we’re not even aware of how we’ve been enriched.”