The following is an edited reprise of a Facebook post of mine from February 2017, three years ago this week. — bk

I’ve seen YES twice before, or three times depending on how you count. The first was the “90125” tour, which was remarkable for the no-amps-no-cables stage setup. The second was the Fly From Here tour, with short-tenure lead vocalist Benoit David. I got to hang out backstage and meet the band post-show, which was a treat. That was a shortish show but quite good. Audrey and I also saw ARW (Anderson Rabin Wakeman) last fall, playing YES music. They were superb; Jon Anderson was in remarkably fine voice. 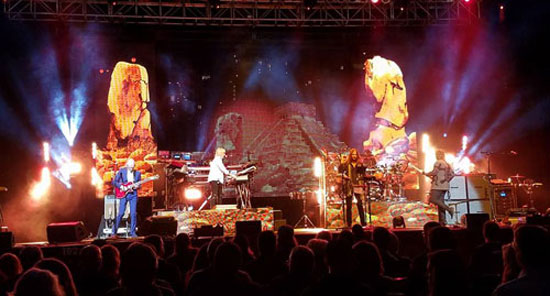 Last night’s show was in the concert venue at Harrah’s Cherokee Casino. I don’t much like casinos; with due respect to those who enjoy such places, I think they’re for suckers. One has to travel through the casino to get to the venue. They still allow cigarette smoking in the gaming areas, so it stinks.

The room where the show was held had a decent sound system and mix. Not perfect but not bad, and not too loud. The place was about 2/3 full, though it thinned out during “Revealing Science of God” (who says people don’t have good taste?)

The band currently features Steve Howe (guitarist since ’70), Alan White (drummer since ’72), Billy Sherwood on bass (auxiliary and/or full-time member, on and off since 1990, which is 27 years, people), Geoff Downes on keys (with Yes on and off since 1980) and vocalist Jon Davison (joined 2012). Alan White is still having back-associated health problems, so his deputized drummer Jay Schellen (an associate of Sherwood’s) played on most of the songs.

The band opened with 1980’s Drama in its entirety. Save for a few miscues – this was the opening night of the tour – it was a muscular performance that gave every player and vocalist a chance to shine. Drama is an underrated album in the group’s canon, but hardcore Jon Anderson fans will likely never accept it as legitimate. Their loss. White drummed on the opening number, and then Schellen took over for him.

The band didn’t offer “hellos” and whatnot until they completed their start-to-finish run through Drama. After some warm thanks and greetings, they launched into a selection of tunes from elsewhere in their catalog, most notably “And You and I” and “Heart of the Sunrise,” both from early 70s albums (Close to the Edge and Fragile). Superb, as was a later Howe solo spot, eventually joined by Davison on vocal.

The second half of the show featured “Revealing Science of God,” Side One of Tales from Topographic Oceans. The epic-length tune is, in my estimation, a somewhat clumsy medley of 15 or so tunes, none of which is especially memorable. They performed it well, but the crowd seemed to get a bit restless. Oddly – since they were well-balanced during the numbers before and after – Davison’s vocals were low in the mix on this number. It didn’t matter too much, because it’s not exactly a singalong tune, and it arguably has too many lyrics anyway. 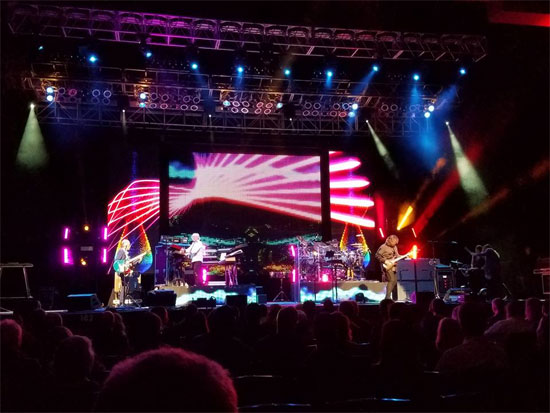 Much better was “Ritual,” Side Four of that ponderous double LP. Sherwood took some thunderous solos, and White returned to do the same (aided on extra drums and percussion courtesy Davison and Schellen). An encore of “Roundabout” was no big surprise, but great nonetheless.

We stayed over in a nearby motel (the road in and out of town is very narrow, steep, winding and not lit). In the morning we had breakfast at a casino restaurant; Sherwood and White were in the adjacent booth. We didn’t bug ’em other than to respond “hello.”

All in all I very much enjoyed the show. There will always be those who feel the need to respond, “Oh, but that’s not ‘real’ Yes.” And that’s their right. My verdict: These guys were good, and I’d see ’em again. My prediction, for what it’s worth: they’ll soldier on a bit longer, receive their belated “honors” from the RnRHoF this year, and use momentum from that to enliven what will be the band’s 50th anniversary in summer 2018. I predict they’ll deactivate shortly thereafter.

Postscript 2020: I did see ’em again, and I was wrong about the band folding after the anniversary. Next month they head out on tour with Alan Parsons (watch for my interview with him, coming soon).